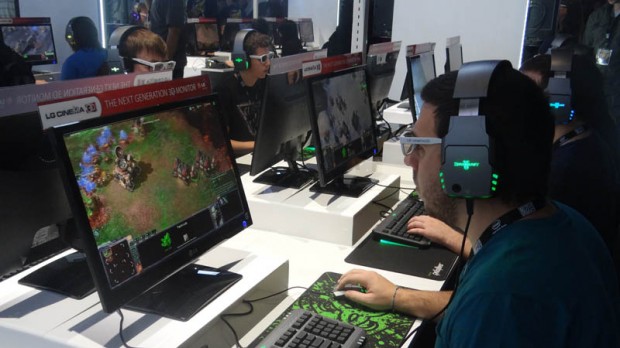 I’ve been avoiding 3D gaming like the plague.  Only second to the gimmick filled antics of the motion controllers that were released last year, I was content to hunker down and let 3D phase itself out.  This weekend at BlizzCon, I got to get intimate with LG’s Cinema 3D technology, while playing one of my most anticipated games, StarCraft II: Heart of the Swarm.

Now before I get started here, there’s something you should know.  LG flew us out to BlizzCon to cover their product, and while this wasn’t my first experience with a PR trip, it was one that I was a little hesistant about because of my overall dislike/uniformed opinion on 3D gaming.  See, the Nintendo 3DS gives me a headache, and the short stint of play testing I did at my local Best Buy on an “active” 3D display, left me dizzy and disoriented.  That said, I had pretty much written off the liklihood of ever making the jump into 3D gaming.  As immersive as the technology is, it’s hard to justify the physical effects of playing for just a short time.

As hesistant as I was to jump in,  getting to play Starcraft II: Heart of the Swarm against a fellow journalist who didn’t know how to defend a ling rush, coaxed me in nicely.  And once I was in, I wasn’t leaving, because not only was I playing Starcraft II: Heart of the Swarm, I was playing it in 3D and enjoying the hell out of it. It was a great game to show off the new tech for me, Starcraft II is a beautiful game and the battlefield being layered in the manner that it is, it shows off the technology nicely.  With clear distinictions between the foreground, battlefield, and backdrop, there’s a better sense of immersion than in its standard view.  The air units and ground units have a clear distinction with the 3D technology enabled on the monitor, and I was surprised that the functionality of the game wasn’t decreased in the least.  Grabbing and splitting units was still a breeze, although it was easy to kind of get lost in the beauty of it all.

So how did this happen?  How did I go from anti-3D, to pricing televisions and monitors to enhance my gaming in just two days?  Well talking with the technical folks at the LG booth, I’ve come to find out that the technology is quite different than what I had already experienced.  Obviously, the 3DS which I mentioned above is glasses free, and the “Active 3D Technology” found in many 3D televisions is the only one that I had experienced.  The LG Cinema 3D displays use a “passive” 3D technology and their design focus is to provide the end users a more “comfortable viewing experience” while having “no perceived loss in resolution”.  This focus is blatantly obvious.  As a consumer, I naturally assimilate cost with quality.  That couldn’t be more wrong in this case.

The monitor that I tested was the LG D2342P Cinema 3D LED Monitor.  They had other models on the show floor, which incorporated the same technology into a larger package.  But when I explained my gaming setup, and what I wanted from a 3D monitor,  the engineers that I spoke with boasted about the fact that it would do exactly the same things it did for StarCraft II: Heart of the Swarm to any of my catalog of video games.  Which is when I got extremely excited.  What this meant was for the price of the monitor, which retails at $349 and no other out of pocket expenses, I could have 3D for all my games.  Whether the game has been developed in 3D or not, the LG D2342P will allow you to play in either 2D or 3D at the press of a button.  Through software provided, any 2D images or films can be converted into a 3D view, according to LG.

After my day one experience with the technology, I was still on the fence.  But I think myself and anyone that stopped by the LG Booth to watch the StarCraft II GSL matches on Day 2 on the mind boggling 260 inch display, can attest to just how well the 3D does for the viewing experience, whether you are playing the game or not. Driving home the point even further, I also attended Kotaku’s meet-up which was sponsored by Samsung.  Right then and there, I realized why I had been so turned off by 3D.  The Samsung technology on display was of the “Active” kind, not only did it not look as good as what I had played earlier in the day, but it was nearly double the price.  To be fair the monitor was a couple of inches larger, but the quality in my eyes was heavily skewed towards LG in the comparable displays.

Talking with fans as they exited the LG Booth and StarCraft II Experience in 3D, many common threads popped up.  For one, nearly every person I talked to had agreed with fact that they felt less strain on their eyes.  As gamers we subject ourselves to long play sessions, and for many, utilizing 3D for extended periods of time just isn’t feasible.  With many of the people who visited the booth to the play the game battling it out for 30 mins to an hour, most people said that they were as comfortable going out as they were going in.  I think alot of people were also surprised at just how affordable the monitor is.  At $349, it’s definitely a gateway drug into 3D gaming.

As you can see, we were impressed with LG’s demonstration of the Cinema 3D technology.   So much so that the journalistic hat came off, and gave way to the consumer that is always looking to get the most out of my entertainment per dollar spent.  Now I have to say that I only experienced StarCraft II: Heart of the Swarm and that I only played it on the model that I mentioned above.  I can’t speak to the quality of other games, or other models, but if you were looking for an affordable way into 3D gaming, and aren’t willing to sacrifice quality, LG’s new monitors seem to be the best in class.