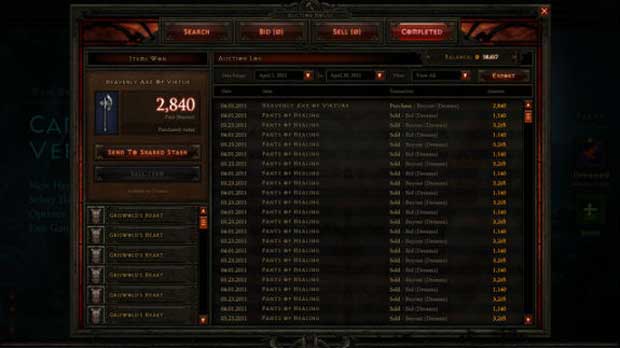 When Diablo III launches sometime in the near future it will feature an auction house similar to that found in World of Warcraft, with a huge twist.  That twist is the ability to buy and sell it’s for cold hard cash.  At the recent press event for the Diablo III beta, Blizzard explained this new marketplace feature for the game.

“As a seller, you can put an item up for minimum bid, or set a buyout price option. So you could just put something up for buyout only, and now it’s more of a purchase site, but you have the option as the seller to do that. And on the buyer’s side, you can choose to bid and to set a maximum bid, so it will auto-bid up to it. So it works just like eBay basically.”

Though it was also explained that you aren’t limited to the real world currencies to purchase items, there will be a completely different auction house to facilitate the buying and selling of in-game items for gold as well.  After a long hard battle against the gold farmers, it appears that Blizzard has found a way to capitalize and control the market for the good that they’ve created.  This is likely the best way, and as you can expect, Blizzard will take a portion of the proceeds of the exchange.

How much is that?  That remains to be seen.  More concrete details are surely on the way, as Diablo III rolls into beta.