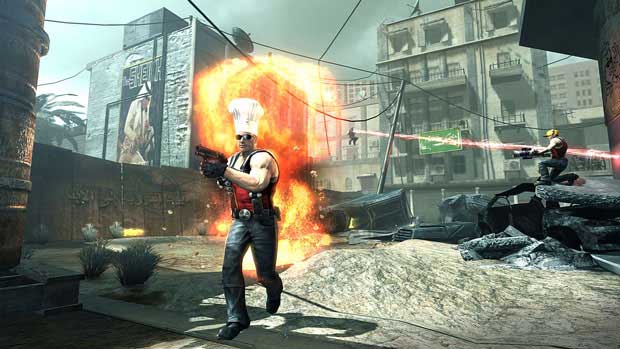 Duke Nukem Forever’s first swathe of DLC is headed to the Xbox 360, PS3, and PC this fall. Titled Hail to the Icons, this new multiplayer DLC includes three new game modes, and four new multiplayer maps which include new weapons as well. The map pack will be free to all First Access Club members.

The map pack will offer DNF’s take on some of the modern classics with the Parody Pack.

Freeze Tag – provides some of the most fun team gameplay in Duke Nukem Forever. Players cooperate to freeze and shatter their opponents in succession for huge point streaks and combos. See who can hold on to the babe the longest in Hot Potato and play free-for-all Duke style in Hail to the King.

Call of Duke – Duke engages in modern combat in a war-torn city. Foes don’t stand a chance against the Duke when he spams the map with the N00b T00b.

Sandbox – Players take the role of mini-Duke in a giant sandbox with two bases at either end made out of children’s toys. This map features Sticky Bombs.

Inferno – Time machine engage! Duke does combat in a hellish landscape of lava and teleporters. Who turned on the 16-bit graphics, and more importantly, where did this DFG come from?

2Forts1Bridge – Hats? Duke doesn’t need no stinking hats. Give him a minigun and he’ll beat off all comers.