EA Access Games Will Stay In The Vault Permanently 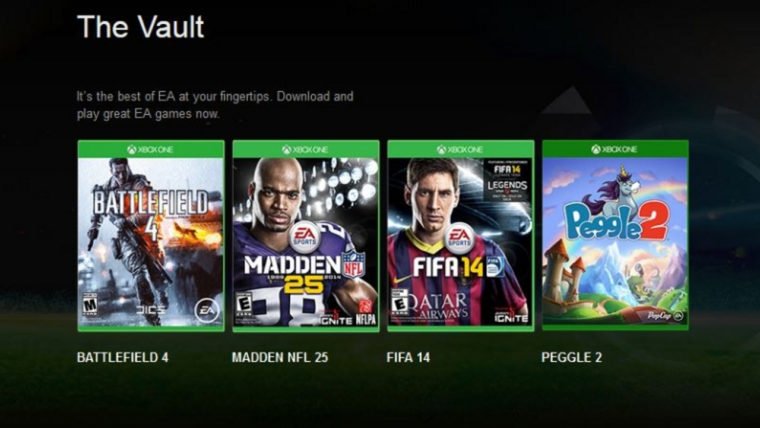 EA COO Peter Moore has told CVG that the games made available via EA Access will be “permanent” and will not be removed from the services Vault at any time. This means that new subscribers to EA Access will immediately have access to every game that has been offered for free as part of the service. However, you will still lose access to the games if you allow your subscription to expire, much like games you earn via Playstation Plus and Games with Gold for Xbox One.

Once a game goes into the Vault it stays there, it’s not going to be taken out, that’s a commitment we’ve made.

Currently subscribers to EA Access are able to download four games for free, giving them unlimited use as long as they remain subscribers. Those games are FIFA 14, Madden NFL 25, Peggle 2, and Battlefield 4. This new comment essentially means that these four games will always be free as part of the service, so new subscribers years from now will still be able to download Battlefield 4. This is in contrast to Sony and Microsoft’s similar services, which offer a rotating schedule of “free” games, phasing out older titles to make room for new ones.

As far as what games might be added to The Vault in the future, Moore revealed that “The Vault will get its share of triple-A titles. We haven’t made any announcements to that extent about exactly when, where and how, but the Vault will be substantial. New game additions will be determined by franchise and timing,” he said. “We have to make decisions along that way, so there’s no template, like 30 days after a game ships it goes into the Vault.”

EA Access is a monthly or yearly subscription offered only on Xbox One. Subscribers pay either $4.99 a month, or $29.99 a year for unlimited access to games featured in The Vault, a 10% discount on other EA titles, and exclusive early demos of upcoming games such as Dragon Age Inquisition. Sony decided to not allow the service on its Playstation 4 system because they felt it did not offer “the kind of value PlayStation customers have come to expect”.