The latest news in the world of video games at Attack of the Fanboy
May 17th, 2016 by Scott Grill 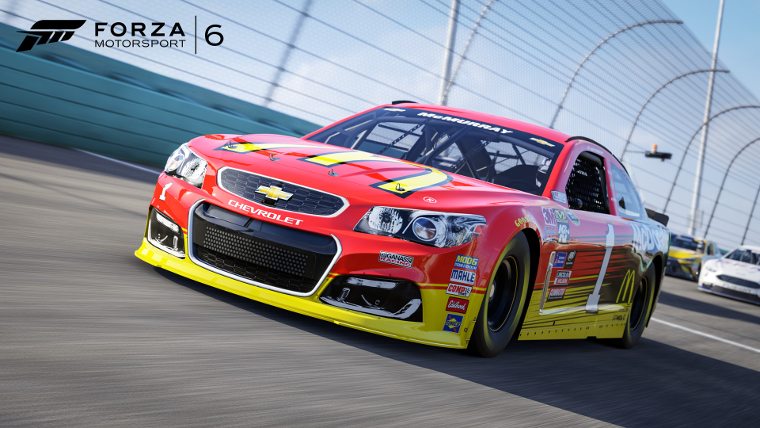 Forza Motorsport 6 made it official Tuesday. Turn 10 Studios announced a NASCAR expansion pack is coming to the Xbox One racing simulator and it is accompanied by a free content update that adds new features.

The NASCAR expansion pack will be available on the Xbox Store later today for $20. It includes 24 cars from the 2016-season from teams Chip Ganassi Racing, Joe Gibbs Racing, Steward-Hass Racing, Hendrick Motorsports, and Team Penske. Cars from top drivers like Jimmie Johnson, Kurth Busch, and Chase Elliot are all represented.

The DLC also adds the Homestead-Miami Speedway to the track list. The pure oval track also features a road course configuration to support both NASCAR racing and the sport car events.

A NASCAR World Tour career mode brings a case of the “What ifs” to Forza Motorsport 6. The event features different events on the different tracks and circuits in the racing game. It allows players to pit NASCAR rides against all other classes of cars from GT, to endurance racers, to open wheel Indy and Forumla E cars.

“The NASCAR Expansion highlights the power and passion of both ‘Forza Motorsport’ and NASCAR,” said Dan Greenawalt, creative director for Turn 10 Studios in a press release. “With the addition of the NASCAR Expansion, ‘Forza 6’ now offers more than 600 Forzavista™ cars to collect, customize, and race. Players will be able to compete on tracks from around the world and across a huge variety of international motorsport disciplines. Bringing these kinds of automotive fantasies to life is what Forza Motorsport is all about.”

A free content update to Forza 6 arrives alongside the NASCAR expansion. The May update adds several welcome new features plus brings LeMans’ Old Mulsanne and Full Circuit tracks back to online multiplayer. Here are the details from the game’s website:

HUD Proximity Arrows – New on-screen HUD arrows will provide players with information on cars in close proximity. Especially useful for players who prefer to use cockpit or hood perspective when driving, these optional HUD proximity arrows indicate surrounding traffic and will give players that extra chance of avoiding costly wrecks.

Drafting and Drivatars – Making the most of the draft is more important than ever in Forza Motorsport 6. Now, players will be able to feel the intense effects of the draft on their cars’ performance as they fight for every inch at close quarters. In addition, Forza Motorsport 6’s Drivatar opponents have been refined to manage the intricacies of tight pack racing at high speeds, where every inch counts.

Quick Stop – In racing, victory has always required quick reflexes. Forza 6’s new Quick Stop feature means that strategy will play a bigger role than ever. In Quick Stop race mode, all cars are required to take at least one mandatory pit stop before the end of a race. As the race unfolds, choosing an early or late lap for your Quick Stop can be the difference between winning and losing.

Rolling Starts – Now players will have the option to select a rolling starts option for races. Rolling starts offer an exciting alternative to traditional standing starts, giving the players the chance to experience the thrill of green flag starts at speed. Rolling starts also allow the grid to spread out, in turn reducing the number of first-corner accidents.

New Damage Option – For Forza players that love endurance racing, we’ve added a brand new damage option – cosmetic damage with fuel and tire wear. This option is ideal for players who want to experience the challenge of racing long distances while their fuel burns down and tires gradually lose grip, without having to worry about a single crash disabling their car and ruining their race results.

Multiplayer Le Mans – Le Mans has returned to online multiplayer! For the first time in Forza Motorsport 6 players will be able to race on Le Mans’ Old Mulsanne and Full Circuit ribbons in multiplayer hoppers and Leagues.