Gears of War 3 Horde 2.0 Expands on a Great Mode 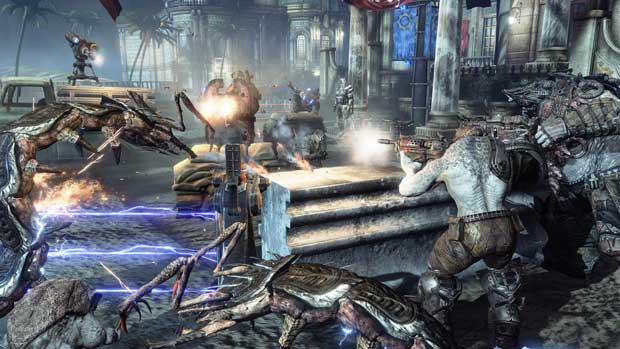 Gears of War 2 brought a new way to enjoy the Gears of War franchise with the introduction of the Horde Mode.  It was an instant hit with fans of the franchise, and in Gears of War 3, Horde Mode 2.0 will ship with the game.  The concept of the mode was simple, grab some friends, and look to survive up to fifty rounds of increasingly difficult enemy onslaughts.

In Horde Mode 2.0, the premise is the same, but this time around Epic has added some interesting twists into the gameplay to keep the game fresh with each progressing round.  As you progress, you’ll be earning cash for your kills.  What are you going to do with the money?  Well, there’s plenty of goodies to spend it on.  You’ll be able to fortify your position before each wave begins.  Different defense mechanisms are littered throughout the levels which range from turrets to fences that will disable your enemies if they start to overrun you.  You’ll also be able to repair said defensive positions with the cash, in the event that these items take too much damage during the course of a round.

The defensive fortifications are upgradeable and unlocked by progressing through the leveling system in the mode, where you’ll unlock increasingly more efficient defensive abilities. If you liked the Horde Mode in Gears of War 2, but felt like it was missing something, don’t worry you weren’t alone.  Epic heard the outcry of the community and incorporated plenty of new features to keep Horde 2.0 fresh come this September.