The latest news in the world of video games at Attack of the Fanboy
August 20th, 2012 by William Schwartz 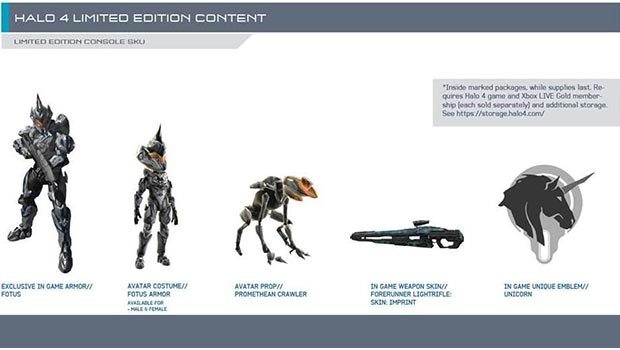 If you thought some of the deviations from the normal Spartan armor sets in Halo 4 were strange, this latest exclusive armor from 343i will blow your mind.  Introducing Unicorn Armor.  In the Halo 4 Limited Edition Console SKU players can unlock the Fotus armor.   As you can see in the image above, the Fotus armor is adorned with a giant horn on the helmet.

You will need to purchase the Halo 4 Limited Edition Bundle from Microsoft to get the exclusive armor and other digital goodies that come with the console.  To match the horned armor set, 343i has also thrown in an exclusive Unicorn Emblem to be used in-game, an exclusive gun skin for the Forerunner Light Rifle, a Promethean Crawler Avatar Prop, and a Fotus Armor Avatar Costume.

The Halo 4 Xbox 360 320GB console bundle isn’t cheap.  Priced at $399 this limited edition Halo 4 Xbox will release alongside Halo 4 in November and comes with two wireless controllers, a black headset, a copy of Halo 4, the decked out console, and of course the digital items mentioned above.

Halo 4 is due to release in early November exclusively on the Xbox 360.