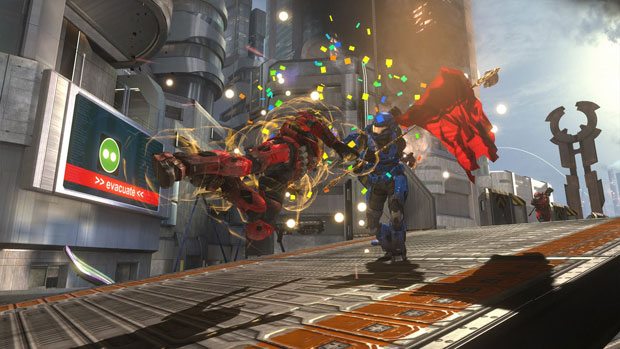 When the Halo: Combat Evolved Anniversary Edition releases next month, Kinect will play a large role in this celebration of Halo.  Using voice commands to perform simple in-game actions will be a first for the motion controller, as well as some other interesting ways that the device will be used to interact with the game.

Using voice commands in Halo: Combat Evolved Anniversary Edition, you’ll be able to do things like throw grenades, reload your weapons, and switch on the fly between the game’s classic look and the updated graphics for the remake.  While that might not be enough to sell you on the Kinect, there’s more.

In the Analyze Mode, you can also use the motion controller to scan items during the single player campaign.  Vehicles, Characters, Enemies and weapons will have the capability of being scanned when pointing at them with your reticule, by simply saying the word “scan”.  The scanned content will be stored in an in-game library which you are able to browse and navigate much like you can on the Kinect enabled Xbox 360 dashboard.

So as it stands, you won’t be pew pewing just yet when it comes to first person shooters on the Xbox 360 with Kinect, but it’s a step in that direction.