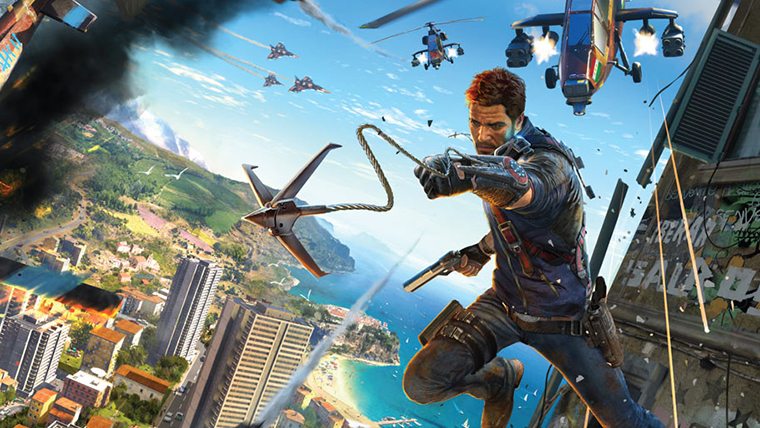 Avalanche Studios has confirmed long-running rumors of Just Cause 3 in development at the Swedish Studio.  The over-the-top open world action is set for return in 2015 with Just Cause 3, as confirmed by Game Informer’s announcement of their inbound cover story for the game.

According to the announcement, Just Cause 3 will be a new-gen and PC-only affair.  Sorry Xbox 360, PS3, and Wii U owners, it looks like you’ll be missing out.  The game is apparently set in a fictional island grouping in the Mediterranean, and will feature “vastly improved parachute and grapple mechanics,” and will feature “the all-new wingsuit.”

Screenshots that had surfaced last week indicated an impending announcement about the game, but also led to plenty of speculation about Just Cause 3 being a free to play game.  Game Informer reports that what they saw at Avalanche did not line up with those reports, and further confirmation from Square Enix reveals that Just Cause 3 is in fact a “full price title for Windows PC, Xbox One and PS4 scheduled for release in 2015.”

Avalanche and Square Enix have updated this information with an official Press Release announcing Just Cause 3, an exerpt of which can be found below.

“We’ve been waiting for this moment ever since Just Cause 2 was released, said Christofer Sundberg, founder and Chief Creative Officer at Avalanche Studios. “This is the culmination of a decade’s worth of open-world evolution and innovation. In JUST CAUSE 3, we’ve sent Rico to a beautiful Mediterranean archipelago. He is of course bringing his Grapple and Parachute, both with game-changing upgrades, as well as the brand new Wingsuit. JUST CAUSE 3 truly represents the next generation of chaotic sandbox fun, and we can’t wait to show you more next year.”