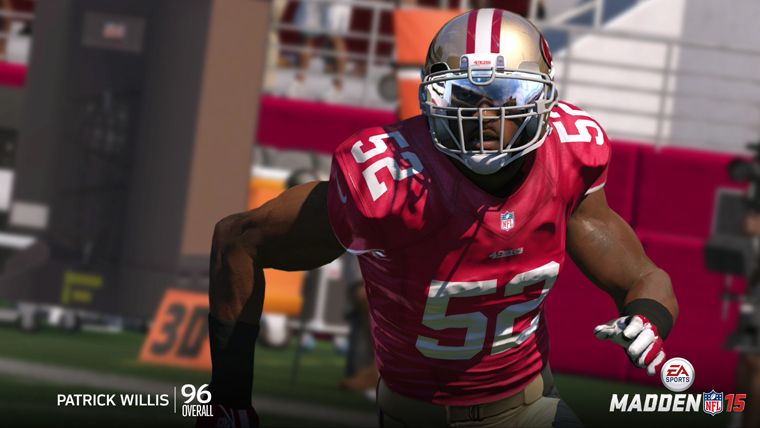 In a very defensive focused year for Madden, we’ve seen a lot of detail put into the top players on that side of the ball in Madden NFL 15. We’ve already told you about the front line with the top defensive ends and defensive tackles, so naturally we now move a level behind them to the linebackers, this time specifically the middle linebacker.

Often known as the quarterback of the defense, the middle linebacker position is just about the most important defensive position for getting playcalls out to the team. Not only is a good MLB able to stop the run, but also to read the pass well and pick it off in clutch situations. For the first time of the positions we’ve shown you so far this year, we have a top two made up from the same exact team, the San Francisco 49ers.

Both Patrick Willis and Navarro Bowman are tied with a 96 OVR ratings, which is pretty incredible for one single team. Many teams forgo having two middle linebackers, but the 49ers utilize a 3-4 defense where both are able to shine. If you are one that likes to play this position on defense, the 49ers are a very hard team not to pick in Madden NFL 15. The Carolina Panthers’ Luke Kuechly boasts an incredible 99 OVR in three different statistical rankings, TAK, PUR, and PLAY REC, but his mid 80s BLK SHD ratings leaves him ranked below the two 49ers MLBs.

Make sure to check out our full review of Madden NFL 15 and look for its release this coming Tuesday, August 26. The full top five linebackers can be found in the gallery above, with analysis from the Madden ratings master, courtesy of EA Sports as per usual.