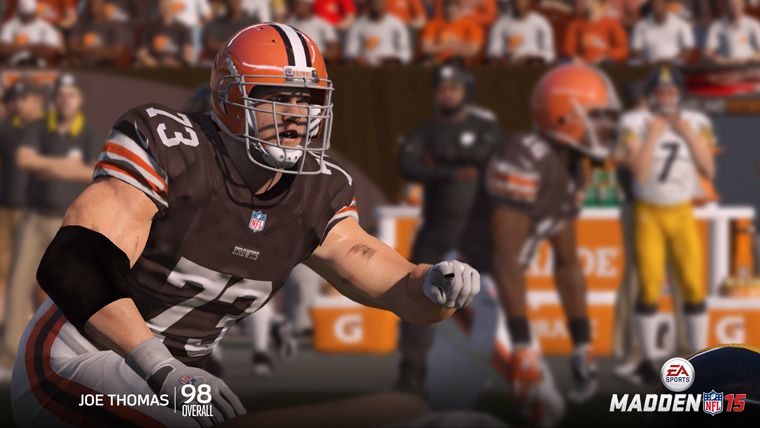 We are less than a week from the release of Madden NFL 15, so we are finally in that home stretch before launch. In the meantime, we’ve been bringing you the ratings for various positions, such as quarterback and running back, but today we bring you the final set of ratings for the offensive side of the ball. This position in fact is one of the most important of all, the offensive lineman.

Coming in on top is maybe a surprise to those that do not follow the sport very closely, as he is a member of the perennially terrible Cleveland Browns. Joe Thomas is the best offensive lineman easily in the game and even features a 99 pass blocking rating. Whether Johnny Football or Brian Hoyer, or maybe even Connor Shaw, are at the helm for the Browns when you use them, Thomas will dominate the opposing defensive lineman most every time.

While Thomas is the best pass blocker in the game, the number two rated offensive lineman in the game is the best run blocker, which comes to little surprise as he leads the way for top tier Philadelphia Eagles running back LeSean McCoy. Evan Mathis opens up holes for his running back and might just be on the team you will want to use if you love to run the ball.

The full gallery of the top five offensive lineman can be seen above, with analysis as always by Madden’s ratings master Donny Moore, courtesy of EA Sports. Also, make sure to stay tuned for the top ratings of the defensive players in the game as well as our review for Madden NFL 15 in the near future.