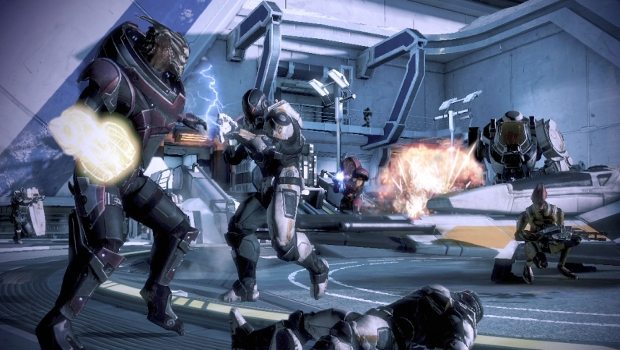 As you know, Mass Effect 3 is getting some free multiplayer DLC set to hit the Xbox 360 on July 17. The “Earth Multiplayer Expansion” will bring players similar content to that of the first two multiplayer packs – new maps, character classes, and weapons. If you’re just itching to get your hands on the six new classes set to release with the new DLC, here’s some info via a user on the BioWare forums that will tide you over until next week.

The files not only reveal the new character classes in detail, but also provide the new powers each one will be endowed with. Additionally, new pics of the classes as well as of the newly implemented weapons are included.

Fury: “Fury operatives use implants to fuel biotics and their incredible
movement speed. These operatives wind an unpredictable path on the
battlefield, moving in and out of combat before returning to unleash a
sweeping biotic attack on their unsuspecting targets.”

Demolisher: “The Demolisher uses grenades to attack at range and to
terrorize the battlefield. Demolishers can also create a supply pylon
that stocks allies with an unending reserve of grenades and thermal
reloads.”

Paladin: “The Paladin carries a powerful omni-shield onto the
battlefield to block enemy fire. The Paladin also uses the shield as a
heavy-melee weapon that, when modified with incendiary or cryo upgrades,
creates a devastating combination attack.”

Shadow: “Shadow infiltrators use implants to dramatically improve
agility, making them slippery combatants on the battlefield. Their
monomolecular blades are a menace from cover and close range.”

Slayer: “Slayers use implants to dramatically improve mobility. Their
dizzying sword attacks can hit multiple opponents, and the Slayer’s
ability to slip fire makes them hard to pin down on the battlefield.”

Multiplayer not your thing? BioWare has got you covered on that end also. Yesterday, the voice actor hired to play the Reaper Leviathan in new Mass Effect 3 single-player DLC confirmed that new solo content is indeed being developed.