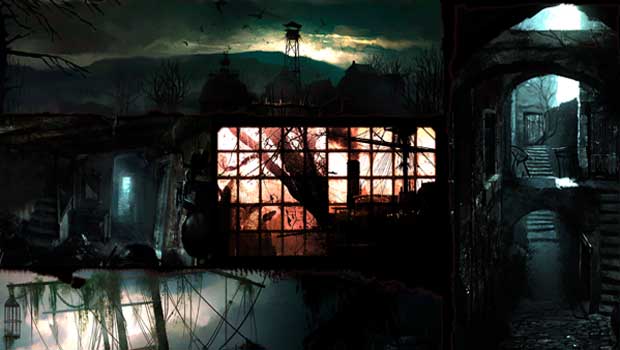 Earlier this week, Bethesda revealed that it would be teaming with legendary developer of the Resident Evil franchise to bring survival horror back in a big way.  A collage of dark settings was revealed that gave us a glimpse of what to expect from the game from a visual standpoint, and the developer recently conducted an interview on Famitsu about the visual fidelity of his latest creation.

“At present, we’ve at last cleared the initial phase.  Regarding art creation, we’re already getting a very good atmosphere.  We’re extremely confident about the graphics this time.  Of course, we can’t recreate the same quality as shown on the image boards, but we can deliver game screens with atmosphere that is close to this.  (Image Above, larger below)  There are still mountains of inadequate areas, though, so we’ll have to work with the designers on brushing these up.”

Famitsu also talked about what survival horror means to Mikami, and here’s what the genre’s forefather had to say:

“We’re aiming for pure survival horror,” said Mikami.  According to a translated recount of the interview, Andria Sang reports that to Mikami “Survival Horror is something that is created atop a fine balance between the fear players feel and the feeling of accomplishment they feel of overcoming that fear with their own power.  It’s not just about scaring the player, but it is, as the name says, survival horror.  A way of thinking that Mikami has had since his work on the original Resident Evil.

There’s no telling when this one will arrive, but survival  horror fans have another one to look forward to.