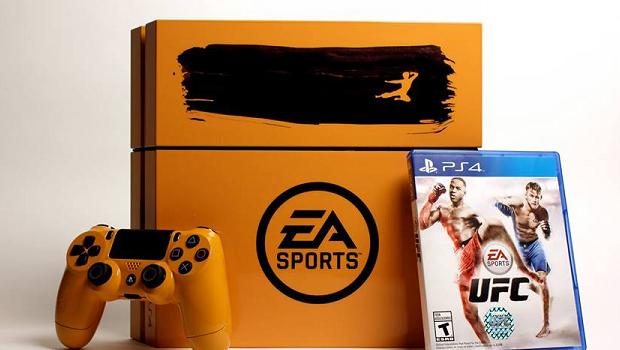 Former boxing champion, Mike Tyson, is giving away a cool looking black and yellow colored PS4 on his official Facebook page. It is to commemorate Bruce Lee’s appearance in EA Sports UFC.

The PS4 is mostly colored yellow with a black stripe showing a silhouette of Bruce Lee kicking. There is also a huge EA logo on the front plus a copy of EA Sports UFC will be given out too. The DualShock 4 controller is also colored yellow as well. Yellow and black were the iconic colors Bruce Lee wore in the movie “Game of Death”. This was the last movie he filmed before his tragic untimely death.

Mike Tyson is giving away this cool prize on his Facebook page.

“I have this awesome Bruce Lee PS4 to hook up one of my fans with. All you have to do is Like, Comment or Share for a chance to win and I’ll pick a winner in a few days!”

Be sure to visit his Facebook page all week to see if you could be a lucky winner of this great prize. A pretty cool prize if you are a fan of Bruce Lee and also EA Sports UFC. Bruce Lee was offered as a pre-order bonus, but you can still unlock him in the game. All you have to do is “complete Career Mode under the hard difficulty“.

EA Sports UFC is out now for PS4 and Xbox One.