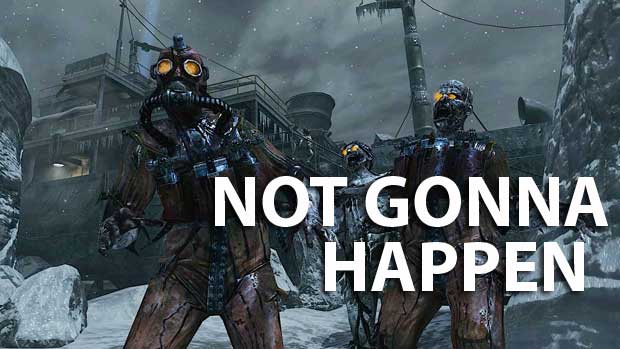 Treyarch knew they struck gold with their incredible zombies mode in Call of Duty: World at War.  The downloadable content kept pouring in, and fans kept lapping it up with each new pack getting better than the next.  Enter Black Ops, and the tradition continues.  It’s arguable that there are a whole load of people that play the Zombies mode of Call of Duty: Black Ops long after the fun of multiplayer wears off.  It’s a great addition to the game, and frankly it sets Treyarch apart from their rivals/teammates Infinity Ward.

“Rather than trying to cannibalise each other, they do things that we would never do but have turned out fantastic – like their Zombie modes – and added new features to multiplayer that we would never add, just because they’re a different style”.  claiming that “Every developer has their own personality and their own direction, and more so than ever we’re seeing people who really enjoy this style and the other. And it’s not a black and white good and bad; they’re very different experiences but in the same core gameplay.”

What Modern Warfare 3 does have on the way though, is a pretty bad little mode of their own called Spec-Ops. Revamped for Modern Warfare 3, this twist on the horde mode style gameplay is sure to please as well.