Most Popular Amiibo Revealed – Link Dominates in All but Japan 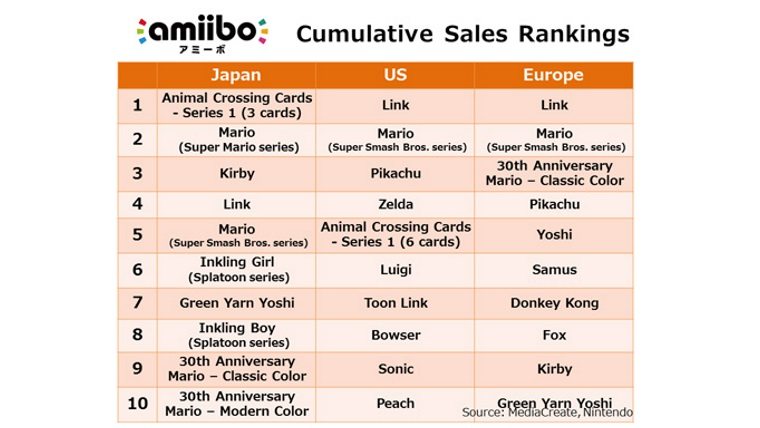 The popularity of Amiibo might have come as a surprise to many, but the chart that Nintendo just revealed of how popular each figure is in comparison to the rest yields few surprises. Nintendo mainstays top the charts in all three regions, however, there are some interesting comparisons that one can make between the US, Europe, and Japan based on the findings.

For one, The Legend of Zelda seems far more popular in the West than it is in its home country. Link dominates both the US and Europe, but drops to number 4 on the Japanese listings. Animal Crossing takes top spot in Japan, the collectible cards specifically. This fits with the usual thoughts on Japanese gamers, namely that they love Animal Crossing, and that they love collecting cards and other such items.

Splatoon also seems much more popular in Japan, compared to the US and Europe. Inkling Boy and Inkling Girl both make the list there, not even appearing in the top ten in the other two. Mario also takes more spots in Japan, with various versions of the character appearing at spots 2, 5, 9, and 10. He only pops up once a piece for US and Europe.

The rest of the charts are a smattering of the more popular Amiibo, with Yarn Yoshi appearing for Japan and Europe, but not the US, Pikachu hitting near the top in the West, and Kirby enjoying huge popularity in his native country. Which figures are your favorite, and which are you surprised to see make the list? Let us know in the comments.