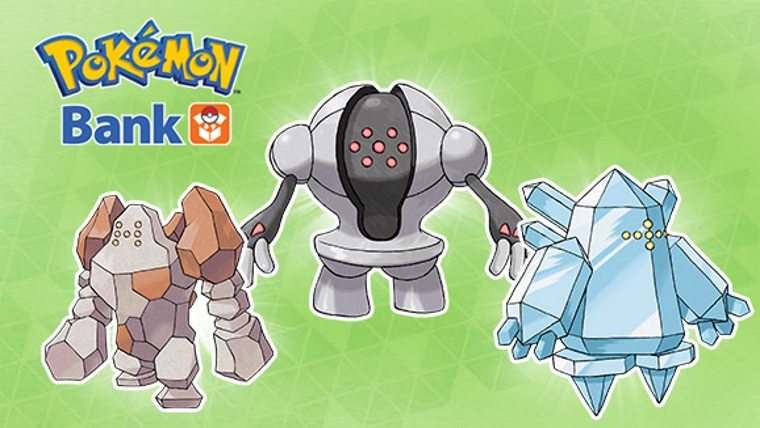 Starting tomorrow, March 4th, and running all the way until October 31st, users of the popular Pokemon Bank service will receive three free Pokemon in their account. These aren’t just a bunch of Rattata, Luvdiscs, or other common Pokemon. Instead they are three of the toughest to find and catch in the games: Regirock, Regice, and Registeel.

On top of this, they aren’t the same versions that you can catch. They instead possess special, hidden abilities that can’t be found naturally in the game. The stats for each of the three Pokemon is below:

Regirock – With the Hidden Ability Sturdy, if Regirock has full HP and is hit with an attack that would normally knock it out, it will be able to endure the hit with 1 HP remaining. This is a great Ability for Regirock to have, being a Rock type with many weaknesses.

Regice – Regice’s Hidden Ability Ice Body allows it to restore HP when the weather condition is hail. Regice is strong against opponents that attack it with special moves. By using Hail, it can recover HP throughout the battle while doing even more damage!

Registeel – Registeel’s Hidden Ability Light Metal reduces its weight by half. This decreases the damage it will take from moves such as Low Kick and Grass Knot that are more powerful the heavier the target is. It is especially good for Low Kick, a Fighting-type move that is super effective against the Steel-type Registeel. Roll with those supereffective punches and strike back!

Pokemon Bank allows players to transfer Pokemon between the different games, without using a link cable or even having to use multiple 3DSes. Instead they can just upload and store their Pokemon, then pull them down in other games. The recently released Pokemon Red, Blue, and Yellow will use the service to allow you to transfer the original 151 into the latest games, Sun and Moon.