Pokemon Go has had a lot of controversy surrounding it over the last few weeks, which first started when the in-game tracking system broke. Third-party trackers helped in the meantime, but with those getting shutdown a couple weeks ago, it make tracking very difficult, but it looks like Niantic is testing perhaps the best method of tracking yet.

When Pokemon Go first launched, the in-game tracking method was rather confusing with the steps method. However, the tracking basically became people just running around and hoping to find Pokemon nearby with little judging of where they were after the disabling of third party trackers.

As we told you last night, a new update for Pokemon Go came out for both iOS and Android that added something to the nearby tracker that was really only for aesthetics, grass behind the Pokemon, but it appears they are beta testing something much more according to many on the Pokemon Go subreddit. 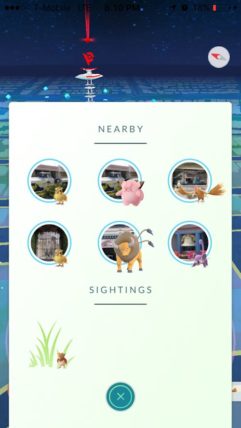 Niantic in the patch notes for the new update said that they were testing some new things that certain users would get, and it appears that players in San Francisco are the first to get this new tracker.

This new tracker that can be seen on the right includes a Sightings section that is just as everyone has now, but it also has completely changed the Nearby section to have the images of the Pokemon, but also a circle with an image that corresponds to a nearby PokeStop, which you can see on the right. This is only in beta tests right now, but hopefully it will do well and expand out to more gamers in the very near future so we can all get back to hunting with a little more direction.