Rise Of The Tomb Raider Demo Appears For Xbox One

The latest news in the world of video games at Attack of the Fanboy
December 20th, 2015 by Scott Grill 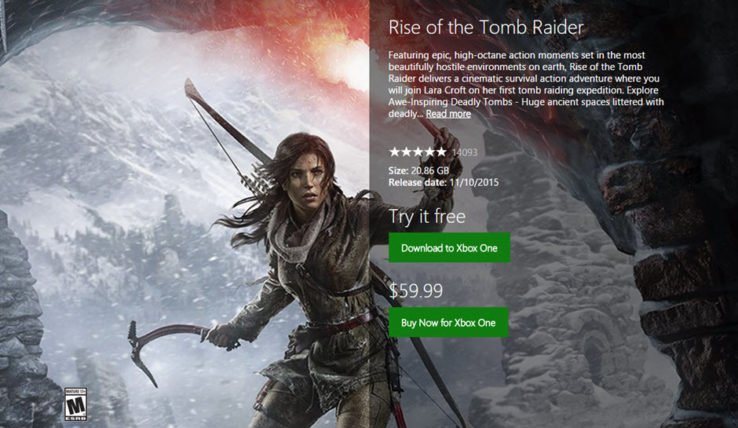 A surprise demo for Rise of the Tomb Raider appeared Sunday night on the Xbox Store. Game demos have been rare this generation, but Lara Croft’s timed exclusive adventure is available to download now.

The Rise of the Tomb Raider demo weighs in at 20.8GB for the Xbox One, which is the exact same size as the full game. So, the good news is that it will be an easy unlock if you do decide to purchase the game.

Microsoft is kicking off a big end of the year sale on Tuesday, December 22 and don’t be surprised to see Rise of the Tomb Raider as one of the titles discounted. It’s one of the best critically reviewed games for the Xbox One in 2015, but has not been able to find any traction with sales.

Crystal Dynamics latest effort failed to make the top ten in software sales from the November NPD results and it’s really not surprising to see why. Microsoft and Square Enix struck a timed exclusivity deal for Rise of the Tomb Raider, which immediately cut its potential sales in half at a minimum. The situation was made worse when Bethesda Softworks announced the highly anticipated Fallout 4 with the same release date and Activision pushed Call of Duty: Black Ops 3 to a Friday release just the week before. Throw in the release of Star Wars: Battlefront a week later and it is less than shocking Lara’s latest soiree failed to burn up the sales charts.

Still, it’s a good time for the demo. Millions of new Xbox Ones are going online this week and millions more may be looking for something different to try. It certainly can’t hurt while PC and PlayStation 4 owners wait for their inevitable shot at Tomb Raiding sometime in 2016.