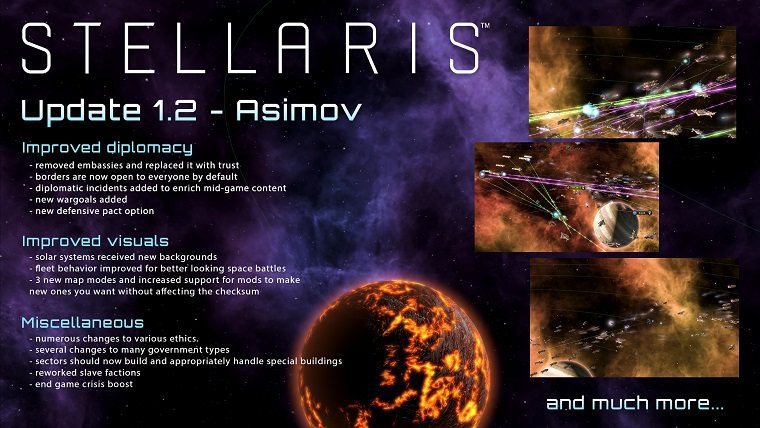 As is apparent from the picture above, there are a host of visual, graphical and technical tweaks that are a result of the update. However, there is much more to read up on regarding the update via the huge changelog, which you can check out for yourself by clicking right here.

Among the many updates to the game comes the tweaking of the game’s battles, of which Paradox detailed with the following:

“One thing we were not quite happy with in the release of Stellaris is the way battles look – when small numbers of ships are engaged, it generally looks fine, but large fleet battles turn into disorganized heaps of ships, or ‘beeswarms’ as they have been described by players. A number of mods (such as the Beautiful Battles mod) emerged quickly to tweak this part of the game, and we’ve been looking at them for inspiration on how to improve the battle visuals. We plan to look more in detail at ship roles and fleet engagements in the future, but for Asimov we’ve made the following changes:

– The range of all weapons have been increased, so that fleets will engage at longer ranges and spend more time advancing at each other before close-up engagements happen.

– Combat computers were changed from Aggressive and Defensive into Swarm and Bombardment computers, to better describe their roles. Ships with Swarm computers will move in closely and engage, similar to old combat behaviour, and have bonuses to damage, speed and evasion. Ships with Bombardment computers will advance into weapons range and then slowly drift towards the enemy until they have range with all of their weapons, and have bonuses to accuracy, fire speed and weapons range.

– The default combat behaviour of ships was changed from that of orbiting ‘swarm’ mode into one where they make passes at the enemy and attempt to engage with ‘broadsides’, which should help make large battles look like less of an angry beeswarm unless all ships involved are using aggressive computers.”