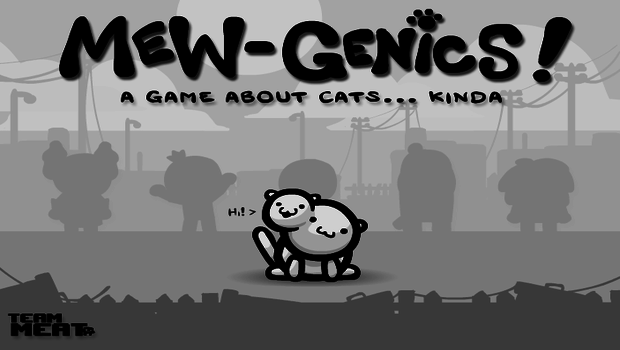 Team Meat founders Edmund McMillen and Tommy Refenes know how to make indie games that are addictive, challenging, and even downright bizarre. Apparently, they also join the rest of the Internet in its obsession with cats. In addition to being inundated with pictures of cute kittens doing cute kitten stuff and faces of cats encased in slices of bread, we’ll now have a cat-inspired Team Meat product to enjoy as McMillen announced today on the dev’s blog that the team’s next game will be titled, Mew-Genics.

Though McMillen didn’t delve into the details, we can be sure that we’ll experience the same zany humor and wacky narrative that Super Meat Boy provided. As McMillen put it:

“Mew-Genics is by far the strangest project I’ve ever worked on…and that’s saying something. Tommy and I are very happy with how development has been going on it and decided that Mew-Genics will be the next official Team Meat game. We don’t want to spoil too much here, but we can say the game will be randomly generated, strange and involve cats.”

He went on to state that development on the project is “moving quite fast” and that more information, gameplay details, and screenshots are on their way. McMillen also reassured gamers whom are itching to scream in public at their iPhones in frustration that the iOS version of Super Meat Boy is still in development, but will be put off until work on Mew-Genics is completed.

Released in 2010, Super Meat Boy garnered gamer and critical acclaim as a unique and heavily challenging indie platformer. As of January of this year, the game has been purchased over 1 million times.