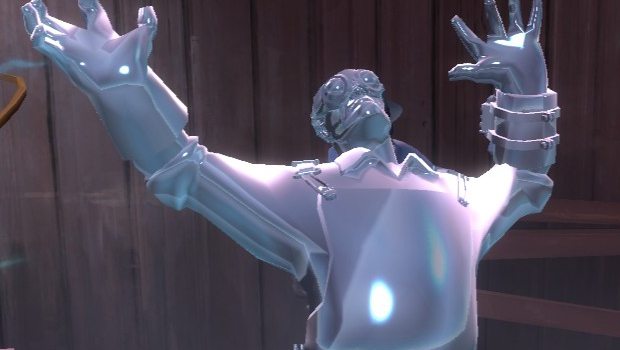 A mystery that has befuddled Team Fortress 2 fans for quite some time has finally been solved. Consequently, an entirely new chapter in the Team Fortress 2 backstory is about to unfold.

Yesterday, Valve subtly provided clues indicating a third sibling of the Mann family and a new, “Gray” faction by including a faint splash of blood on the primary logo of the Team Fortress 2 website. Clicking on the splash sends users to a letter describing what would appear to be a third son of  Zepheniah Mann, the father of Redmond and Blutarch (owners of the RED and BLU teams). Referring to the character as “Gray,” Valve had not previously provided information or context to support the notion that Mann in fact had three sons rather than two…until now.

Before today, the Last Will and Testament of Zepheniah Mann had stood as the main reference to the backstory of the Team Fortress 2 RED vs. BLU feud. Mann, a wealthy Englishman, was convinced by his sons to purchase land plots in the American frontier for the purposes of weapons manufacturing. On the journey to the Americas however, Mann was quite comically stricken with multiple varieties of fevers, diseases, and even blood poisoning. Upon arrival, he realized the land was utterly useless. Dying and pissed off, Mann constructed a Last Will, leaving his entire estate and fortune to his servant Elizabeth and control of Mann & Sons Munitions Concern to his “aide and tracker,” Barnabus Hale.

So how does any of this tie-in to Valve teasing a big content update with a new, third faction? The original version of Zepheniah Mann’s will becomes enigmatic toward the final paragraph. After leaving his cursed land to his two sons, hoping they’d eternally fight for control of it, Mann addresses a mysterious character to which he leaves something of high-value, yet it is selectively censored by some overlaying gravel. The will reads, “Lastly, to…I leave the entirety of my…and swear you to utmost secrecy in its keeping.” With the second blood splash that Valve has implemented on the TF2 logo today, fans are finally able to see the will in its completion.

Clicking on the blood splash sends users to the updated version of Zepheniah Mann’s Last Will and Testament, reading, “Lastly, to most trusted Elizabeth I leave the entirety of my ‘miracle’ gravel cache, uncovered with Barnabus during a trip to Terra Australis. My weakling son Gray resurfaced last year and has threatened to blackmail me for it. I give the gravel to you and swear you to utmost secrecy in its keeping.”

It would unfortunately seem as if the opening of one dead road has lead to another. While Valve has confirmed in this newest clue that Gray is in fact the third son of Zepheniah Mann, we’re certainly left with more questions than answers. What exactly is this “miracle” gravel Mann and Barnabus Hale discovered in Australia and what has become of it since being given to Elizabeth? Where was it that Gray had “resurfaced” from and why did he have such an interest in the gravel, enough to blackmail his own father? Most curious of all, how does all of this tie-in to the rumored Mann vs. Machine content update?

Chances are, Valve is far from closing the book on this on-going puzzle, and they’re most likely reveling in watching us all squirm in an attempt to put it all together.