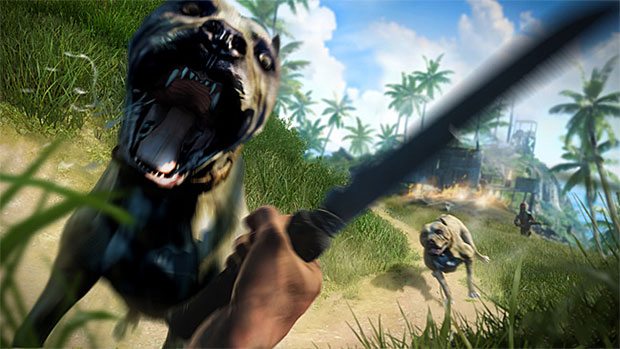 Far Cry 3 – Xbox 360, PlayStation 3, PC – Far beyond the reach of civilization is a mysterious island overrun with violence and suffering. While traveling with friends, you are taken captive and brutalized. Your only hope of survival lies in unraveling the dark secrets of the island and its deranged inhabitants. Alone at the edge of the world, where nothing is what it seems, you must find a way to fight back and escape this island of insanity.

The Elder Scrolls V: Skyrim “Dragonborn Expansion” – Xbox 360 – With this official add-on for The Elder Scrolls V: Skyrim, journey off the coast of Morrowind, to the island of Solstheim. Encounter new towns, dungeons, and quests, as you traverse the ash wastes and glacial valleys of this new land. Become more powerful with shouts that bend the will of your enemies and even tame dragons. Your fate, and the fate of Solstheim, hangs in the balance as you face off against your deadliest adversary – the first Dragonborn.

Battlefield 3: Aftermath – Xbox 360, PC – Set amongst the shattered districts, streets and surrounding villages of a post-earthquake Tehran, Battlefield 3: Aftermath depicts a continuing struggle for supremacy and survival amongst the devastation.  With operational capacity severely compromised the opposing forces must adapt and engage in vertical and horizontal urban combat amongst the dust and rubble with cracks and fissures in the terrain providing unexpected cover and paths to objectives. Additional support comes in the form of heavily modified troop transports and civilian vehicles specially adapted to deliver deadly force to the enemy.

Mass Effect Trilogy – PlayStation 3 – Experience all three award-winning Mass Effect titles with the Mass Effect Trilogy. This action-packed RPG saga follows the rise of Commander Shepard from Alliance Marine to becoming the galaxy’s most elite soldier — the only soldier who can lead an all-out galactic war against an ancient alien race known as the Reapers.

Marvel Avengers Battle for Earth – Wii U – When it comes to fighting crime, maintaining public order or rescuing damsels in distress, the Avengers have got it in the bag. They’re called superheroes for a reason their abilities, techniques, skills and power far surpass that of any ordinary man or woman. But if you turn the tables and face them off against each other, you’ve suddenly got exceptional abilities against exceptional abilities and extraordinary skills against extraordinary skills. Prepare yourself for epic battles, battles where the mighty power of a superhero rests in your very hands, and where taking down your opponent will test that power to its limit.