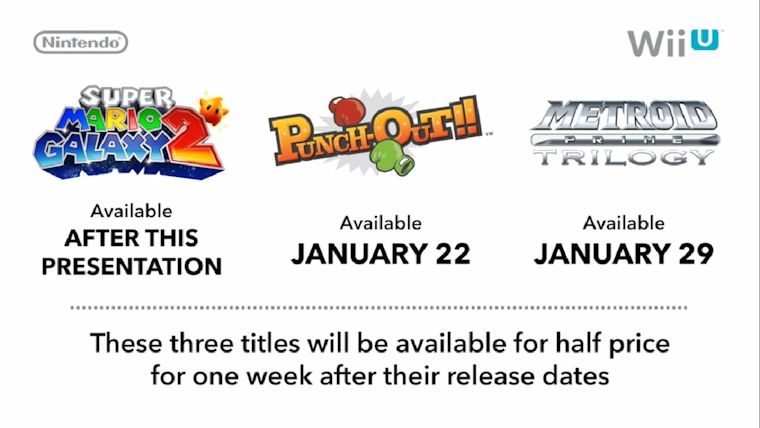 One of the first bombshells in today’s Nintendo Direct came early on, as Satoru Iwata revealed that the Wii U was going to be getting something that many people were hoping we’d see one day, downloadable Wii games through the Nintendo eShop.

This news is an amazing reveal, as not only can you use the Classic Controller, but also the GamePad on certain games. Specifically, Iwata announced the first three games coming to this lineup, with Super Mario Galaxy 2 being the first. In fact, it will come later today after the Direct is over.

In addition, it was announced that Punch-Out was coming on January 22 and then the very sought after Metroid Prime Trilogy on January 29. Even better, Iwata revealed that for the first week after release, each of these games will be half off in the eShop, so there is good reason to go ahead and buy them as soon as possible.

This is a major addition to the Wii U and really gives a lot of possibilities with the rarer games on the console that are quite hard to find now. Xenoblade Chronicles is getting ported to New Nintendo 3DS, but I know plenty would love to get that rare game through the eShop in the future at a much cheaper price. We’ll just have to wait and see what ends up coming in the future.