The latest news in the world of video games at Attack of the Fanboy
April 13th, 2012 by William Schwartz 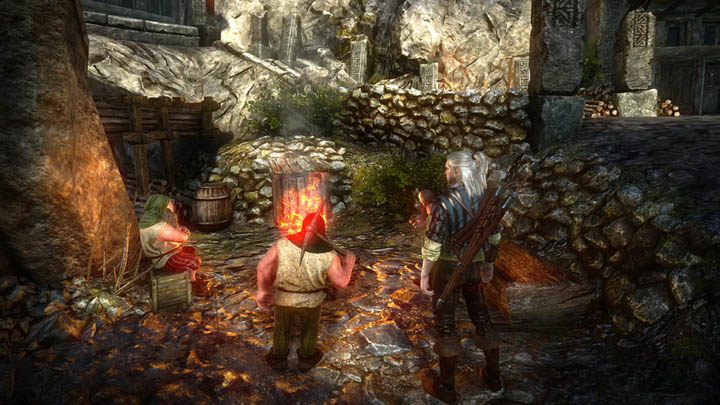 The Witcher 2: Assassins of Kings has finally made its way to consoles.  Debuting today on the Xbox 360, The Witcher 2 has already begun to receive praise across the board.  The Witcher 2: Assassins Of Kings is a single player Role Playing Game (RPG), and sequel to the critically acclaimed 2007 PC game, The Witcher. Based on the short stories and novels of Polish author Andrzej Sapkowski, Assassins Of Kings continues the adventures of the Medieval monster hunter for hire, Geralt of Rivia. It is also the first game in The Witcher franchise to be released on Xbox 360. Game features include: hack n’ slash and magical combat, a mature storyline, game development based on choices made during mission play and dialog chains, weapons variety, and graphics quality and control functionality on par with the PC release.

Nearly all reviews have dumped praise on CD Projekt Red’s console offering.  It’s PC counterpart also scored extremely well last year.  Here are some noteworthy reviews if you are thinking about picking up The Witcher 2: Assassins of Kings this weekend.  Attack of the Fanboy’s review should be live at some point this weekend.

Eurogamer – 100 – “The best fantasy RPG on Xbox 360.  The awesome atmostphere, the epic and adult storyline, the beautiful graphics and the clever gameplay are enough to turn this masterpiece into a must buy.”

Meristation – 96 – “The Witcher 2 continues to be a colossal creative and technical achievement and the superb 360 version only confirms the excellence CD Projekt’s craft. Console users get a fantastic version of a fantastic game, while the PC users get a great patch that improves and enhances the experience of the original, a perfect excuse to return as The White Wolf and to live his adventure from a new perspective.”

Game Informer – 95 – “Its weighty combat, difficult choices with real consequences, and fascinating storylines are some of the best gaming has ever seen. I can no longer lord it over the console masses with this one, though, because this long-in-development Xbox 360 port is just as amazing as the original. It’s actually better than it was at launch.”

Video Gamer – 90 – “While not necessarily as big a name as the products of BioWare or Bethesda, The Witcher 2 is still one of the most interesting developments in RPGs within the last ten years, and with a combination of additional content and cutscenes its Enhanced Edition on Xbox 360 is one of the most lovingly crafted fan-services you’ll find.”

IGN – 85 – “In every significant way, The Witcher 2 on Xbox 360 is the same subversive and compelling fantasy that it was on the PC. There are some minor technical and graphical blemishes, but they don’t detract from what is one of the best RPGs of recent years, and the extra content adds value.”

The Witcher 2
We're Looking For Contributors