The latest news in the world of video games at Attack of the Fanboy
January 30th, 2017 by Darrin Wright 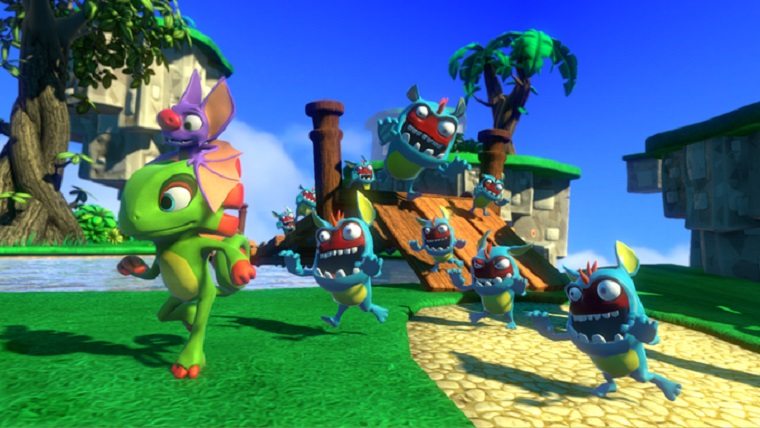 Yooka-Laylee, a crowdfunded game that is basically a love letter to Rare’s Banjo-Kazooie series, is now a sure thing. Developer Playtronic made the announcement on their blog today, marking a big day in the two-year effort to get the game released.

An update to the game’s Kickstarter page reveals that soon backers of the project will be able to lock in their final choices for which platform they’d like to play the game on, including an option for Wii U owners to either move over to the Nintendo Switch version or request a refund. The Wii U version, you may remember, was cancelled not that long ago.

You can also upgrade to a physical version of the game, at least on PS4 and Xbox One, which is also available for pre-order through Amazon. There isn’t any word yet on if the Switch version will have a physical release, or even if it will launch alongside the other versions on April 11th. All Playtronic says at the moment is that “more details will be revealed in the future.”

Wii U supporters who don’t respond to the platform choice survey will be receiving the Steam digital version as a default.

Announced in 2015, Yooka-Laylee is an action platformer with a focus on collecting, created by the same artist who worked on Donkey Kong Country and the Banjo-Kazooie franchise, Steve Mayles. Gamers will experience five distinct worlds in the game, including one where they must navigate a pinball-inspired race course. David Wise (Donkey Kong Country) and Grant Kirkhope (Banjo-Kazooie) are working on the soundtrack, and collecting objects in the game is crucial to progression. Each level also features “one secret arcade game encasing old-school gaming goodness.”