The latest news in the world of video games at Attack of the Fanboy
December 13th, 2013 by William Schwartz 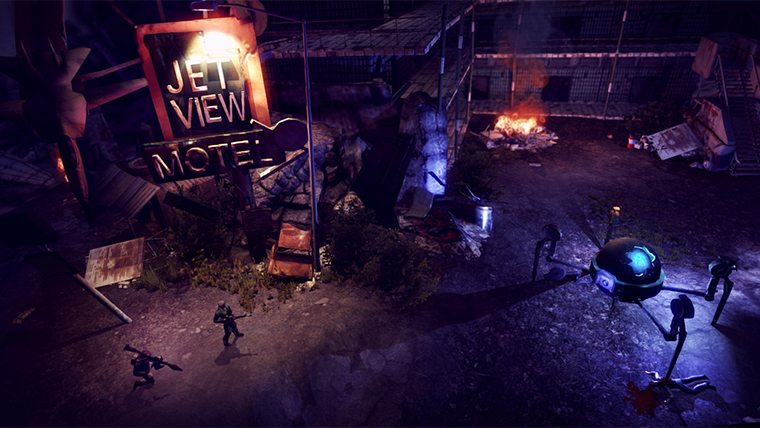 I wrote a few weeks ago about games that defined a genre, and Wasteland was one of them.  It spawned the Fallout series and has inspired countless other RPGs in the 20 years since it was released.  One thing it couldn’t do, however was generate a sequel.  Until now.

Released yesterday, the beta for Wasteland 2 immediately lets players know it’s an old-style RPG that’s going to explode your brain like a blood sausage.  From the fake DLC button on the launch screen and descriptors for guns like ‘old, cheap and well used, this pistol has a lot in common with your mom’, Wasteland 2 is engaging and  not afraid to inject some humour into what is otherwise a dangerous radioactive…wasteland. 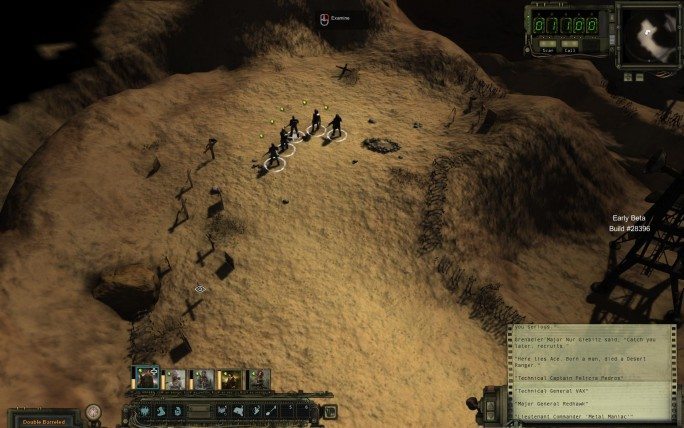 For those that haven’t played the original, or any of the Fallout games, this is the sequel to the definitive turn-based post-apocalyptic CRPG.  Set 15 years after the events of the first game, players again take on the role(s) of Rangers and patrol the radioactive wastes keeping some semblance of order against muties, raiders, robots and crazed giant rodents.

In typical RPG style you can use premade characters or custom-build your own, right down to your own portrait.  Stats are straight from the original, and work really well in this iteration.  Coordination, Luck, Awareness, Strength, Speed, Intelligence and Charisma all allow players to flesh out their characters and pick traits, skills and abilities that encompass a broad spectrum of play styles.  I played around with a high strength, melee character who hit really hard and had the ‘kick ass’ skill and was able to impress other tough characters, but her relatively low speed and awareness meant that she was one of the last characters to have their turn in combat.  Her beefiness however, meant that I could impress a guard enough for him to hand over to me a sawn-off shotgun and quite a few rounds of ammo.  She was also able to use brute force to knock a totem into the water near a drowning boy and save his life (never mind that I had earlier tried the same thing on a different totem only for it to fall on him and kill him).

The breadth of skills you are able to arm your character with is something that many, many RPGs have done and still do regularly.  The difference in Wasteland 2 though is that each skill and ability has a tangible benefit for your character and your play style.  Field dressing allows you to dress wounds mid-combat, surgeon is the only way you will be able to staunch fatal wounds and prevent a player from dying, if you want to disarm the bomb under that V8 Interceptor (yes it’s a wink to Mad Max) then you’ll need someone that has the ‘demolitions’ skill.  If your ‘kiss ass’ skill is high enough then guess what?  You’ll be able to kiss ass and get into places without necessarily having met the regular prerequisites.  It’s a real joy to have a character and to plan out their growth in the game world, and to think carefully about your team balance in terms of skillsets and practicalities as well.  You may think a team of four SMG wielding rangers is a great idea, but realistically there is no way you would be able to find enough ammunition in the wasteland to be able to support the firepower you’d be putting out.  After three or four fights you’d be down to melee weapons or simpler pistols.  Balance is the key here and it’s something Brian Fargo and his team at Inxile have at the forefront with Wasteland 2.

Very easy to play, the game will not however, hold your hand or make things easy for you.  Quests are straightforward and range from the ‘go here and get this’, to the more obtuse ‘scan radio frequencies in this area’ kind of missions.  Exactly how to complete objectives may not always be flagged either.  One thing the original game did so well was to simply not tell players how to do something, but give them the tools to figure it out for themselves.  This is replicated in Wasteland 2 and it’s a move that rewards players for experimenting.  In the first game for example, in the Highpool settlement, one of the characters you talk to mentions a cave across a small lake, but there is no such cave evident until you move around using your ‘perception’ skill to find an entrance.  In Wasteland 2 there are totally innocuous radio towers that most people would overlook as either part of the landscape or irrelevant, until you decide to try out a computing skill on them and find that they have a purpose after all.  The ability to try out different skills on a variety of objects and get a response is indicative of the value Inxile places on rewarding experimentation.  This interconnectedness of skills, abilities, objects and outcomes all weaves together to create an environment that bristles with choice and discovery.

Like the original Wasteland and Fallout 1 and 2, combat is turn based and reliant on player initiative.  Characters and NPCs with higher initiative will act first, while heavier, slower ones will invariably move last.  Range, cover and skill are all factors in combat, and each character will have a set amount of AP (action points) they will be able to perform.  Depending on the type of weapon, AP cost may vary from 2 AP to snap off a round from a pistol, to 6 AP for a heavy blunt weapon attack.  Factor movement into this as well and combat in Wasteland 2 is a gloriously tactical bloodfest that encourages careful thought.  The shotgun that made mincemeat out of some townies in Highpool may do only 1 damage per hit against those giant cockroaches, so is it better to conserve ammo and let the melee fighters take it, or blast away hoping that you can wear it down?  As with skills and abilities rewarding players for experimenting, combat also rewards players that are able to forward plan and control the engagement.  Rather than walk into an area and have combat start, it may be better to hunker down behind some cover, have someone rip down that fence, outflank the raiders and take a potshot at them, then draw them back to your main party and ambush them.  Everything about the game system is flexible and no two fights will play out the same way. 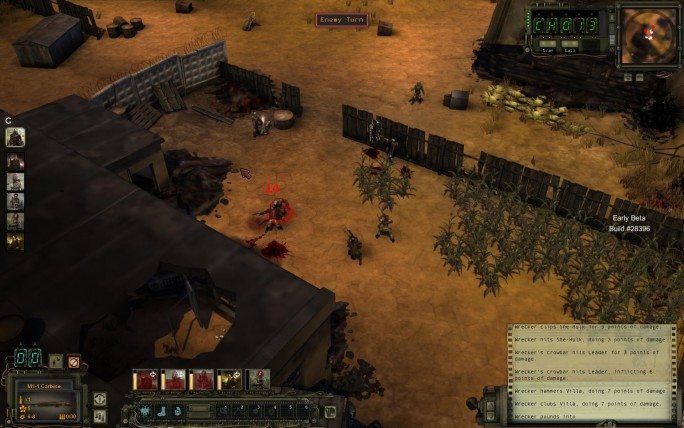 The large world map is strikingly similar to that of Fallout, and it works in much the same way, although with much nicer graphics and clearer markers for populated areas.  You are free to wander around the desert, but radioactive zones and random encounters are a constant threat.  Water for your party is also an issue, and it’s a nice touch that reminds you that you can’t just go from one end of the desert to the other without thought of the resources you will need to get there.   There are oases that you can find to replenish your canteens, and the settlements you encounter sometimes have wells you can use for this purpose as well.

Although only in early Beta this game looks extremely promising and is bound to thrill fans of the genre.  I for one am glad to be back in the Wasteland.