Hands-On with the Next Generation of Minecraft on Xbox One, PS4, and PS Vita 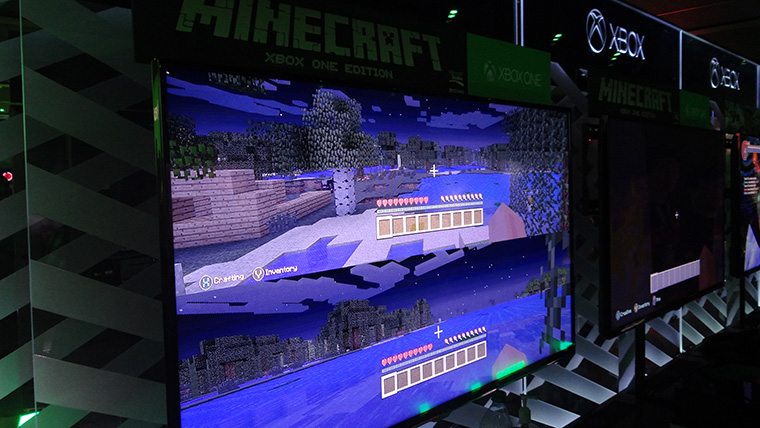 A new generation of Minecraft is coming to the Xbox One, PS4, and PS Vita very soon, but it’s not going to be as big of a difference as you might think.  4J Studios has been plugging away on the next-gen versions of Mojang’s popular title for quite some time, and as evidenced by the presence of Minecraft at E3 2014 the games are nearing completion.

We got hands on time with the Xbox One and PlayStation 4 versions of Minecraft, and for all intents and purposes, the game is very much the same game that is readily available on the Xbox 360 and PlayStation 3.  There’s certainly more power pushing the new game on these new consoles.  Distances are immediately evident when comparing the old generation of the game with its newer ones.  You don’t have to be as close to that mountain in the distance to see its looming presence.  Worlds are also bigger, and that’s an added benefit of having more powerful platforms to work with, but the core of the game hasn’t been changed at all.

The next generation of Minecraft is more of the same game, albeit a slightly better one.  The good news for Xbox One and PS4 owners that already purchased the game on Xbox 360 or PS3 is that the slightly better experience comes at only a fraction of the cost.  While the games cost $19.99 outright, players will be able to upgrade for $4.99.

There really isn’t too much to report back on for Minecraft on the Xbox One and PS4.  The games both look and play the same on the both consoles.  Yes, the new controllers both worked well.  No, the game didn’t look much better, or see much added benefit other than the greater draw distances.   Is it going to be worth the upgrade?  Yes, Minecraft on the PS4 and Xbox One are definitely going to be the best versions of the game.  The ability to import saves to the next-gen versions are a crucial feature, and both the PS4 and Xbox One will allow users to do so.

More impressive though was my spent with the PS Vita version of Minecraft.  You could make the argument that Remote Play makes Minecraft on the PS Vita an non-purchase for those who already own the game on PS4, but the Vita version was impressive, and will likely launch as the most capable handheld version of the game.  This is a full out version of Minecraft on the PS Vita, and this is not the pocket edition that feels somewhat stripped compared to the PC and console versions of the game.

The sheer thought of being able to take Minecraft on the go with the PS Vita already had me wishing that I could purchase the game right now, as E3 has a lot of downtime in waiting for appointments to begin or lines to see games.

Home / Original Articles / Hands-On with the Next Generation of Minecraft on Xbox One, PS4, and PS Vita