The latest news in the world of video games at Attack of the Fanboy
February 15th, 2016 by Louisa Bhairam 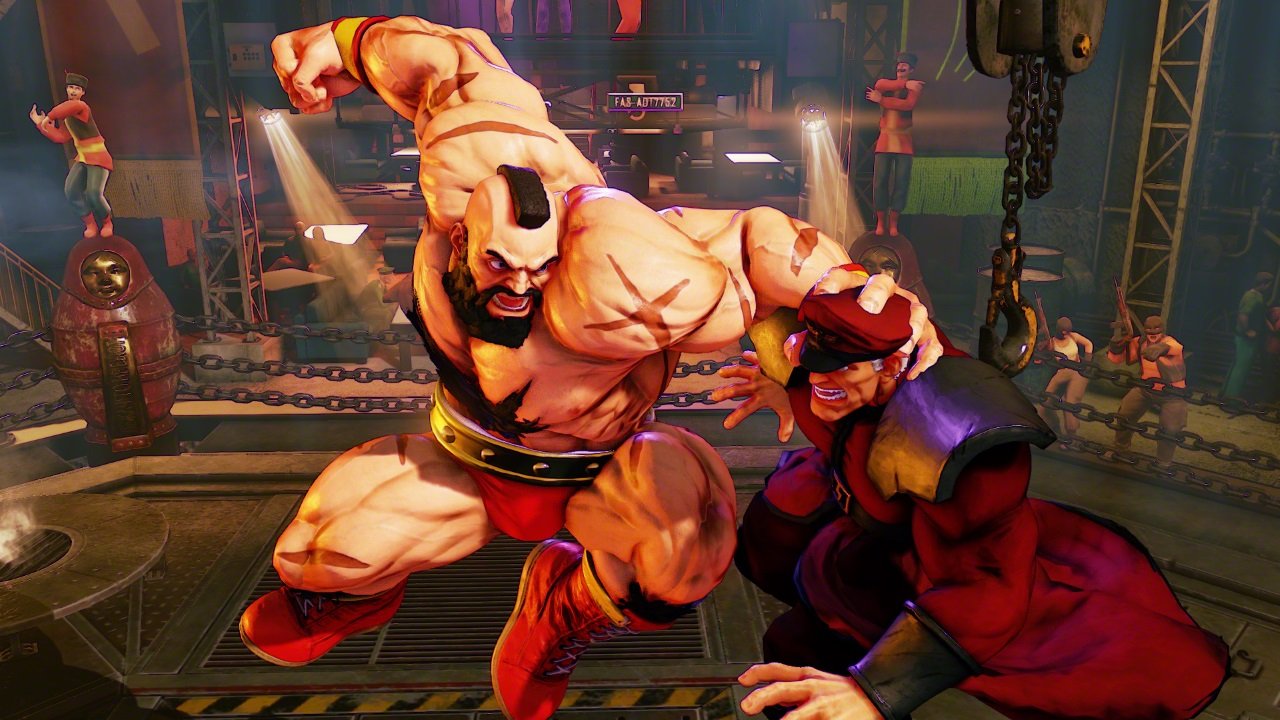 The Street Fighter series has been at the forefront of the fighting genre since the 1980s, and has often been regarded as one of the best series of all time. Seven years since the release of Street Fighter IV, producer Yoshinori Ono has given the game a much anticipated overhaul in new addition Street Fighter V. Unlike its predecessors, Street Fighter V is not set for an arcade release, perhaps signalling the fresh new future in store for the franchise. This new and improved Street Fighter has endless possibility, and could end up becoming one of the most coveted games of the year.

Nothing says fresh like a makeover and the Street Fighter characters now look so meticulously detailed, you feel like you are seeing them for the first time. The designers have been thoughtful when developing these characters, and have done a superb job. There are 16 playable characters to try out, with characters F.A.N.G, Laura Matsuda, Necalli and Rashid serving as new additions to the SF gang. F.A.N.G is the first character to introduce a poison mechanic to the game, once the attacks hit they continuously deal damage until the opponent gets his own hit in on F.A.N.G.. Fan favourites such as Chun Li, Ryu, Ken, and Dhalsim- who seems to have aged so much he has grown a long white beard- have also returned with changes to their looks, as well as their move set. More characters are due to arrive via DLC, with Alex already confirmed for March.

The characters look amazing, as do the settings. Playing on Unreal Engine 4, the graphics are seamless and crisp. Game play is fluid, complete with character close ups and freeze frame K.O’s for that satisfying effect. It’s great that although the graphics have come so far, the aesthetic is not so markedly different that we can’t recognize this as a Street Fighter title. Capcom have stayed true to the game’s roots, and many fans will be thankful for that. 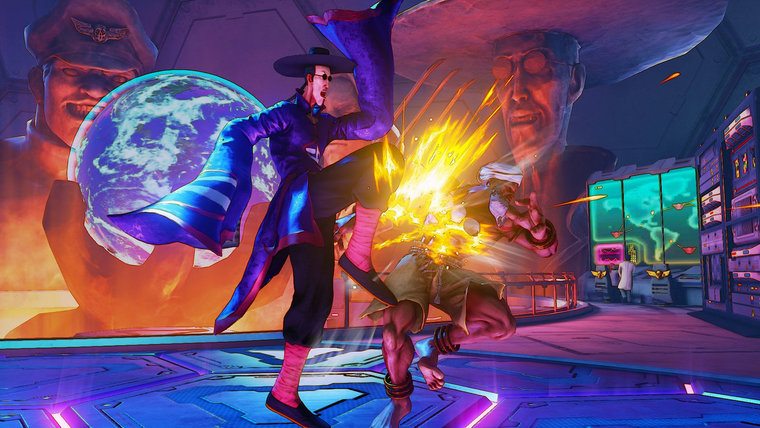 Those who haven’t played before, or haven’t played in a while, are eased in with a tutorial, courtesy of Ryu and Ken. This is a great addition for those who are feeling less than confident in their skills, as you can find your bearings before competing. It can be a little too simple at times though- ‘walk towards Ken’ is one of the instructions, for example. The dialogue is a little cheesy, but the good intentions are there.

Combat, while familiar, has been improved. The basics are the same – punches, kicks and special moves in different speeds. The EX meter from Street Fighter IV remains in the game; a nifty little tool allowing you to grow power over the course of a match and unleash it in one devastatingly powerful attack. Ryu’s Hadouken is an excellent move to try this out on. You also are now given more time to input your combination moves, making this a slightly more accessible game for beginners. This is a really welcome addition to the game, as we all know how hard those combos are to perform. Only time will tell how seasoned Street Fighter veterans will feel about this new accessibility though. Tactics are also incredibly important in Street Fighter V, knowing your character and their weaknesses is vital, and means that button mashers might be out of luck. For example: when administering Chun Li’s world famous ‘Lightning Kick’, you are now required to perform a circle move forward before unleashing your fancy footwork on your opponent. No more just mashing the kick button, unfortunately.

Focus attacks and the ultra meter from SF IV have been replaced by V Trigger, which gives characters who are suffering the ability to turn the tables, as well as making the layout look cleaner. After you lose at least half of your health, the V Trigger can be used to ‘super-charge’ your character for a few seconds. Some characters benefit from V Trigger more, for example; Karin has a set of completely new moves once in this mode. Others you will barely notice a change. Street Fighter V does not specify which characters can do what whilst using V Trigger, it is mostly trial and error for now but will hopefully become more clear as more of the game is released. Also in the V family are V Skills which are special, character-specific techniques and V Reversals which allow you to counter a move whilst blocking. Again, the way in which these work are dependent upon character, and its definitely worth spending some time to work these out(as some can work against you!). 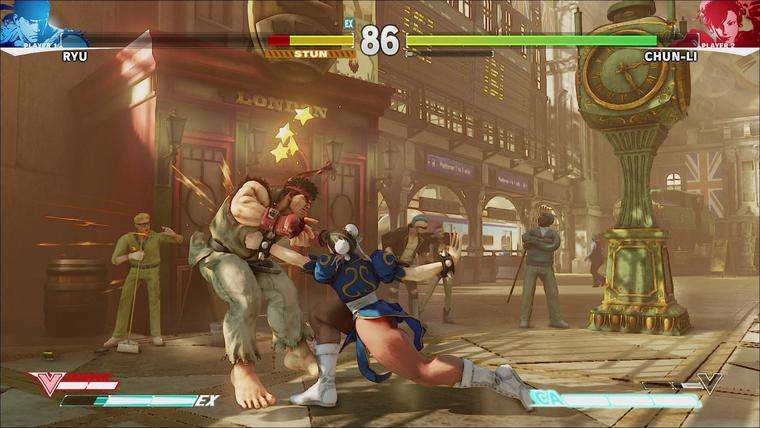 The addition of this V- Gauge system is initially overwhelming and seems complicated, but it really isn’t. In fact, it adds a new depth to characters that you thought you knew, and gives the game a whole new outlook because it can change at any time. Whereas in older titles if you were losing you would pretty much just mash the controller to hell, or cunningly distract the other player, now you can use V trigger and change the game’s mechanic completely. For a game which has been consistently familiar to add this refreshing touch is much welcomed, and players will benefit from crafting their own unique style based on the character of their choosing.

If you are looking to play this game solo, there isn’t much at the moment.

If you are looking to play this game solo, there isn’t much at the moment. Story Mode contains 16, incredibly short, prologues which give just a tiny snippet into the characters story before cruelly finishing after 2-4 battles. When in battle mode a second player can’t even chime in by pressing ‘start’, you will have to quit and return to the main menu to select versus mode. The Story Mode leaves a lot to be desired, and solo players will no doubt be left wanting more. The Story Mode is the only way to unlock alternative costumes, via the shop which is not available until March which is a little nonsensical. It will also be interesting to see how the artwork for Story Mode is received by fans as it is quite different from what we have seen in other Street Fighter titles. All in all, Story Mode is flimsy and underwhelming right now, especially for those who were looking to get to know the newer characters. This mode will be updated via download in July 2016.

Another option for solo players is Survival Mode in which you are pitted against a number of enemies. Your health and EX meter carry over to each one, allowing you to build up points as you play and bet them on Battle Supplements. Once you have beaten the four levels, you are rewarded with new character colours and in game titles. Challenge mode is another option when playing solo, but it is not yet available. With a lot of missing content, especially for solo players, you will have to just put your trust in Capcom to deliver. This is the biggest downfall of Street Fighter V, and we have to hope that the downloadable content is worth the wait. 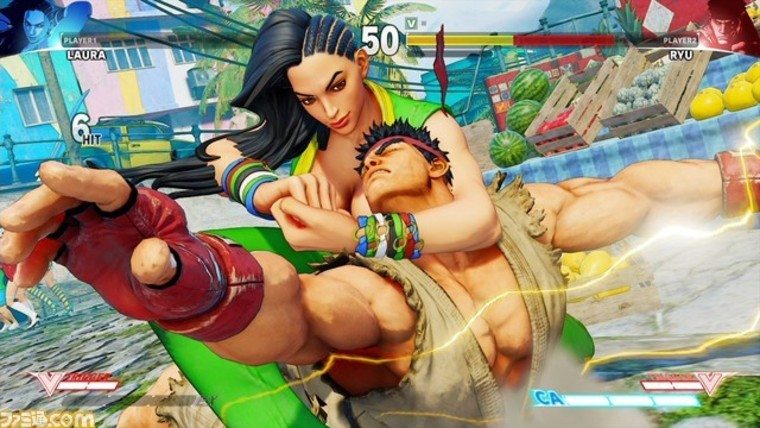 Now, to the online modes. Casual and Ranked mode both match you with a combatant based on the options you have pre chosen. For this, you must pick a ‘favourite’ fighter which cannot be changed between battles. Spectator mode, in which you can invite up to 8 people to an online lobby, is due to release in March. Online play appears to be quite lag-free, but this could be due to the lack of players so we will have to wait and see if it continues. You have the option to choose an opponent with the same bandwidth in order to provide smoother game play, and can also cross play between PC and PS4. Battle Lounge mode is slightly different in that you can choose a different character per round, and choose the number of rounds. Online mode is a great way to lose your street cred as it is pretty hard and we suggest you train up before embarking on it.

Street Fighter V is very bare at the moment, with DLC’s promised throughout the year. It is frustrating to look forward to a complete game and be only provided half of it, and this will deter a lot of people from buying initially. The silver lining is you are able to accumulate Fight Money by leveling up or achieving daily goals, and this will allow players to unlock everything for free. Of course, if you want to be lazy you can also spend real cash and unlock stuff that way.

Although it still has much to achieve, Street Fighter V is already a very impressive comeback for the iconic fighting series. Stunning visuals and new fighting mechanics add to this game’s already winning formula. The disappointment is that this game is missing so much content that it feels unfinished, we can’t help thinking that with a seven year gap more could have been added for the launch. However, once this game is fleshed out over the year we can only hope it will be a firm favourite with those who already love Street Fighter, as well as gaining a whole host of new fans.