The latest news in the world of video games at Attack of the Fanboy
June 18th, 2010 by William Schwartz 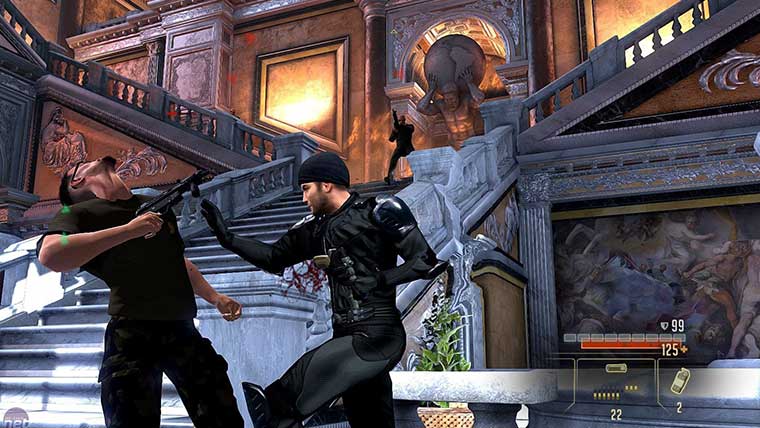 Alpha Protocol is an espionage role-playing game set in the modern world. Loyalty carries a price and no one knows this more than agent Michael Thorton. A talented young agent cast out by his government, Thorton is the only one with the information needed to stop an impending international catastrophe. To do so means he must cut himself off from the very people he is sworn to protect. As players determine how to accomplish different objectives, the decisions made and actions taken in each mission will ultimately transform the type of secret agent Michael Thorton will become. Every choice the player makes as Michael Thorton will carry consequences for his future and the fate of the world. [Sega]

I kinda put Alpha Protocol on the back burner after reading so many negative reviews for the game that I anticipated greatly since it was first announced years back.  Alpha Protocol is one of those games where you fall in love with the premise.  It’s an RPG / 3rd person shooter that reminds you of Mass Effect in some of it’s gameplay elements.  The espionage backdrop, the twists and turns in the story, all of the different customization options available to you make for a pretty lovable concept.  It’s got a Tom Clancy vibe for fans of the Splinter Cell series, and there are few other games if any that give you the feeling of being a spy in as detailed a fashion as Alpha Protocol.  The raw freedom of the game, and the dialog trees that lead to so many different stories to be told, will keep you engaged in the game.  The customization of weapons appearances and powerups really do give Alpha Protocol some depth and if customizing your character into a super spy is something that you are very interested in from a game, Alpha Protocol has it in spades.

If you are fan of a well spun spy story you will be hard pressed to find a game that is as compelling as Alpha Protocol on the market today.  Many of the spy games like Splinter Cell or Metal Gear Solid are a little over the top in the tales they weave.  Alpha Protocol entertains through the classic hooks of espionage without the need to insult your intelligence..much.  Where some games get borderline absurd, Alpha Protocol remains fairly grounded and realistic even when taking in to consideration how many different possible outcomes can actually take place.

The graphics in Alpha Protocol aren’t great, they aren’t bad either.  They are run of the mill, but at times I felt like the game looked a tad generic.  It was as if the delay in the game hurt Alpha Protocol if only because the bar has been raised with so many other titles lately.  Perhaps it wasn’t just the graphics that makes Alpha Protocol a bit generic.  There were many times in the game when there should have been a sense of excitement.  The game really fails to capture the tension of stealth or the adrenaline of shooting your way out of a tight situation.  The game rarely raised your heartbeat and really the only way you would have known there was a build up in intensity at all, was from the music.  Kind of a shame because Alpha Protocol has a lot of potential.  Though, one thing is fairly common in the game.  It continually proves itself to be mediocre in almost all aspects other than the ones it just fails at.

Alpha Protocol is a tease.  I played through the first half of the game and was continually amazed at the ideas of the game.  It was chocked full of poorly executed ideas that if done right could have made Alpha Protocol one of the funnest games of the year.  In the end though, I had to put down my controller on Alpha Protocol.  I have finished very bad games in my gaming career but one thing that will make me put the controller down faster than anything are bugs and glitches.  Alpha Protocol was littered with poorly coded controls, A.I., game breakers, there was a lot to frustrate the player in Alpha Protocol.  We didn’t get off to good start either, as in Alpha Protocol one of the most interesting parts of the game is the very beginning.  Before you are suspect to all of the other inherent badness of the game. Obsidian still managed to put a sour taste in my mouth as I experienced the game freezing on me twice in the first half an hour of play. Not to mention my character would always walk forward.  After trying every one of the six controllers I own to make sure it wasn’t a controller glitch, it was apparently programmed into the game to continuously walk forward.  This lead to many times in my game where I was detected and it just made the game lose it’s appeal.  Especially since you have no control over it.  It’s one thing to have smart enemy A.I. that detects you forcing you to retry levels and play to perfection.  It’s another when you must retry levels because the controls suck and there’s just nothing you can do about it.  I never figured out what caused my player to continuously walk forward at random times, it’s something that I tried to adapt to. It ultimately just made me put down the controller and play something else.

No game should ship with the general lack of polish that Alpha Protocol had.  Especially not a title that has been in the works for so long, that had such high expectations.  The game was laughably bad on so many different levels.  From enemy A.I. running around in circles, to character animations just flat out looking bad, the game probably needed another year in development at the very least.  It’s just baffling that no one spoke up to the faults of the game before releasing it.   Instead, developers voiced their opinions after the fact.  Could it have been a case of the publisher wanting to put the title out “as is” ?  Or did the development team just run out of solutions or money?  I hated so much that I ultimately had to put the game down, when I wanted to like it.  At it’s onset I tried to give Alpha Protocol a fair shake, even having read all of the poor reviews of the title.  Not many games can disgust me, but Alpha Protocol did just for sheer fact that the game continuously lets you down.  Nearly every tiny glimmer of hope that you see during your time with the title is quickly eclipsed by these hugely bad missteps in the most general of aspects for the game.

Even after all was said and done, my time wasted and Alpha Protocol never to be finished or played again, I still didn’t hate the game.  If just for the concept, Alpha Protocol is an ok game.  It will continuously attempt to pull you in to both the story and customization features of the game.  Unfortunately that is only a small piece of the pie.  There is alot of third person action that just doesn’t work.  With a ton glitches and bugs, it comes down to how much tolerance you have for these nuisance.  Some, like myself , would rather not waste the time with so many other great games out there.  I could see there being many people that could overlook the faults of the game if they are a fan of either the  Stealth or RPG genres.  Though my general hatred for games that feel like they are unfinished waged war with my curiosity to see what would happen next in Alpha Protocol, and my general hatred won.