The latest news in the world of video games at Attack of the Fanboy
December 20th, 2009 by William Schwartz 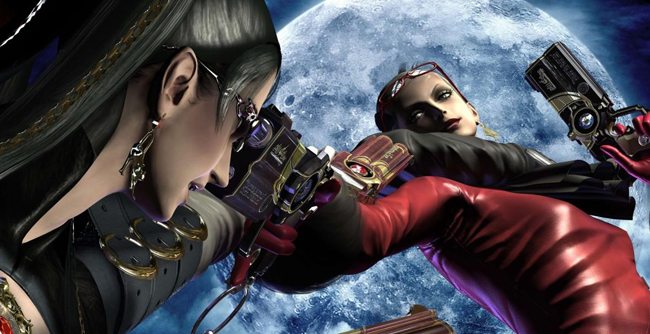 The latest creation from the creator of the original Devil May Cry series Hideki Kamiya at Platinum Games is Bayonetta. Ultra stylish, highly polished, and an absolute surprise: Bayonetta brings an Eastern flavor of game development to the West  and I have to say it was a pleasant surprise indeed. At first glance Bayonetta might be easy to write off for some. The gimmicky hot girl action hero, the accompanying nudity, it does stink of cliche. But that’s about as far as the cliche goes because after playing through Bayonetta there is really nothing I have ever played that is quite like it. The combination of the sexuality, an engaging story, imaginative design, excellent controls, and diversity of the game in general is a nice change of pace from the cookie cutter “smash hits” that basically rule the roost when it comes to game development.

You play as the heroine Bayonetta, a shape shifting witch. A shape shifting, ass kicking witch. After awakening from your coffin that was buried underwater for 500 years, you find that you have no recollection of the past. In your search for these answers the broader plot develops in a basic good and evil story. A battle between the Umbra Witches and Lumin Sages for control of the Eyes of the World transpires. As to who’s who in this ordeal you’re just gonna need to play it to find out, aren’t you?
Well I for one hate it when developers use sexuality just for the sake of using it. I expected the worst from Bayonetta, and while at times its probably not suitable for all ages, Bayonetta does a pretty good job of keeping it classy. This is a matter of each users level of tolerance I guess, but to me, the game explored new territory in treading that line between class and trash. There are some pretty explicit scenes in the game, but nothing too crazy, I will admit its more suggestive than anything.

It’s probably one of the hardest feats for game developers, to come up with a new and unique story that gets the player interested and involved. Many times the deliverance of said story just turns out to be a disappointment, and any real plot twists were seen a mile away. The story and character development in Bayonetta was unique in that, at the onset while familiarizing yourself with the character and your abilities, little is told or known other than that you are a bad ass. But at about the time you start getting comfortable with your in game abilities and are realizing just how bad ass you are, the story starts reinforcing this by developing and building into what turns out to be a pretty incredible crescendo.

Simple or as complex as you would like it to be Bayonetta consists of two button combination control scheme. Y for punch B for kick in any number of combinations can be thrown from a standing or jumping position. But the real fun in Bayonetta doesn’t come until the user starts becoming more familiar with “Witch Time” . As enemies mount an attack you will see a flash momentarily that will que the user to press the dodge, if the dodge is successful and timed correctly it will invoke a witch time, which will momentarily freeze the enemies while Bayonetta goes to work. The rabbit hole goes deeper though…much deeper. As you progress in the game you will earn points to be spent on weapons and techniques, among other things. As you start unlocking items your combat options become open ended as you may choose to have pistols in one weapon slot, a sword in another then in plan B you have flaming foot claws and shotguns being able to toggle between all by just pressing LT in combat. The techniques that Bayonetta can purchase as upgrades also come in handy and make combat free flowing fun. With so many options to try, any play through in Bayonetta could be quite different depending on the upgrades purchased.

Like I said it’s difficult for developers to put out original and unique creations, the money spent in the development and marketing of games has ballooned to a point that makes publishing games that have a questionable reach frowned upon. Well thank god for Japan, because we would likely never see a game like Bayonetta if not for the audience from the land of the rising sun. So, different than Western Games Bayonetta is a wild ride that never really clearly states what it is. You think Devil May Cry so its gonna be a hack and slash style game. Well it is, and it isn’t. There are a ton of combat sequences and the main story progression is made through combat, but there are a lot of other meta games within the game itself. Driving sequences, Shooting sequences, Old Sega arcade style sequences, minor puzzle solving, some loot gathering, they all kind of fuse together to make for a very unique experience. I for one welcomed this, no matter how good the combat is, if a game only consists of wave after wave of increasingly difficult enemies it gets boring. In Bayonetta, somehow every battle seemed to have some importance, whether it was a new breed of “Angel” you were encountering or a variation of a known enemy. The way with which the enemies were mixed in at different sequences made it feel fresh nearly every time. This is a rough comparison but if you liked the heart pumping action sequences of Modern Warfare 2 campaign you will love Bayonetta, when you are not engaged in some form of combat you find yourself in these same types of adrenaline pumping situations, but  in surreal environments.

Delivering much of the story of Bayonetta are the scenes between levels. And since Bayonetta has yet to really paint itself with one particular brush why should they stop at the cutscenes. In a nice change of pace Bayonetta shows off some amazing still frame narrated sequences to carry the story, mixed with the standard cutscenes. It gives the scenes a sort of anime feel to them. Shown as still frames in a movie clip was a nice touch also, the scenes just shined with polish and they were one of the most impressive parts of the game.

Turning on Bayonetta for the first time will only grant you the ability to play the normal skill level game. This mode was unchallening to say the least. This wasn’t because of enemy AI or difficulty, but of perks. At different places in the game you will have the opportunity to contact Rodin, the proprietor of “The Gates of Hell” Bar. Travelling to the gates of Hell will give you the option to purchase new equipment, techniques, and special items, but most importantly lollipops. Magical lollipops that will give you ass kicking abilities unrivaled by even the biggest and baddest bosses in the game. One moon shield lolli and one of the final bosses in the game are done for. Whats bad is you can carry 3 lesser lollipops and 1 mega lollipop of each brand : Health, Magic, Shield, and Attack Power. But if thats not enough as you progress through levels killing angels and breaking crates you will find herbs, which you can combine to make more lollipops. I tried a no weapon upgraded Bayonetta on the final boss and it went down first try with the a full cache of lollipops. Its a little much if you ask me, and given the fact that normal is the hardest option out of the box, its gonna seem real easy to most who play it. Now hard is a different story.

There were a couple times in the game when I was like WTF was that even for. For the most part sequences that are peppered in throughout the game make sense with what is going on with the story. Yet there are others that are completely out of place, and make no sense other than to just show a pretty new area. With little or nothing to do, no loot to gather, and no relevance to what was currently taking place in the story , I didn’t see the reason to add portions to the game that had little to do with the actual story of the game. It’s one thing if there was some sort of introduction of an element to the game that would be referenced in the future. Yep I’m talking about you giant hourglass.. I’m talking about you..

Basically beautiful Bayonetta was mostly easy on the eyes, but there were a couple of problems. Mainly screen-tear, multiple times in the game a very noticeable line in the middle of my screen popped up and it looks like good old fashioned screen tear. A shame because so much of the game is good graphically. I also saw multiple times when changing into the Puma or panther or whatever it was, that this character would be appear to be running through objects, rocks mainly. Lastly, the standard lip sync errors are prevalent once again in this game. I try to look the other way on alot of lip syncing because I have yet to see one game that does it 100% perfect. But I wish they would make the worst errors in unimportant parts, not at the very climax of the game.

I had a great time with Bayonetta, a unique and rewarding experience to those that are willing to take a gamble on something that might be a little out of the ordinary. While not perfect in some areas, the near perfect combat mechanics and engaging storyline work wonders to suppress any of the negatives that arise in the game. A true gamers game Bayonetta mixes a lot of what makes video games good now and from yesteryear, and does it in splendid stylish fashion.