What you've come to expect from the series, albeit from a new angle. 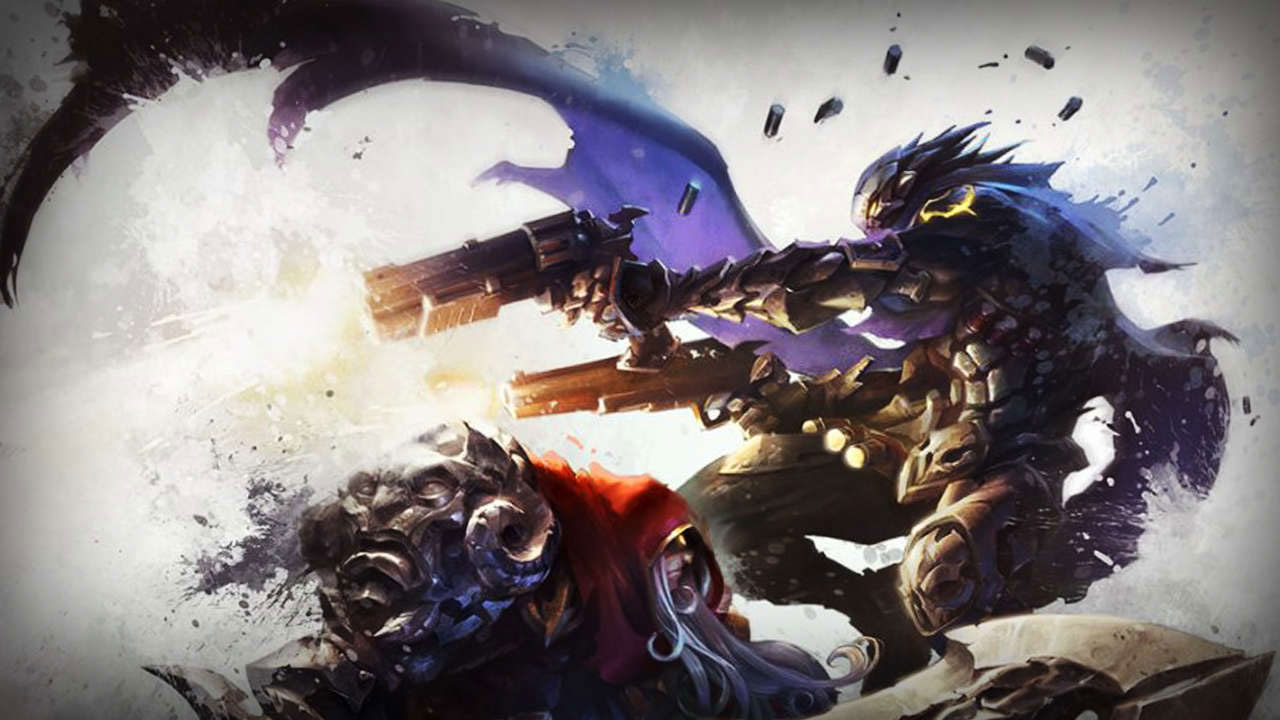 The Darksiders series has been all over the place in recent years.   From the collapse of THQ and the uncertainty of the franchise a few years ago, to 2019 where we’ve now seen two Darksiders games released this year.   The first was Darksiders 3, a game that followed a familiar formula when compared to predecessors.  And now, with the year winding to a close we have Darksiders: Genesis — something much different than what we’ve seen from this franchise in the past.  So how is Darksiders Genesis different?  Well it’s played from an isometric camera angle, which makes it look similar to something like Diablo, while retaining much of what makes a Darksiders game a Darksiders game.   That means plenty of puzzles, unlockable combat upgrades, and that great art style.

Darksiders Genesis is a prequel for the series

Darksiders Genesis takes place prior to the events of the original Darksiders and just after the Four Horseman have come from a battle on Eden where the group have wiped out the other Nephilim — doing the bidding of the Council.  Following that battle, you take control of War and Strife and are given a new task in taking down Lucifer and a number of demons in Hell.  If you’ve played previous games in the series this should all be familiar to you, at least the council, the horsemen, and some of the characters that you’ll meet along the way including Vulgrim and Samael and others.  Unlike those games, Darksiders Genesis focuses on multiple characters that you can control in War and Strife. 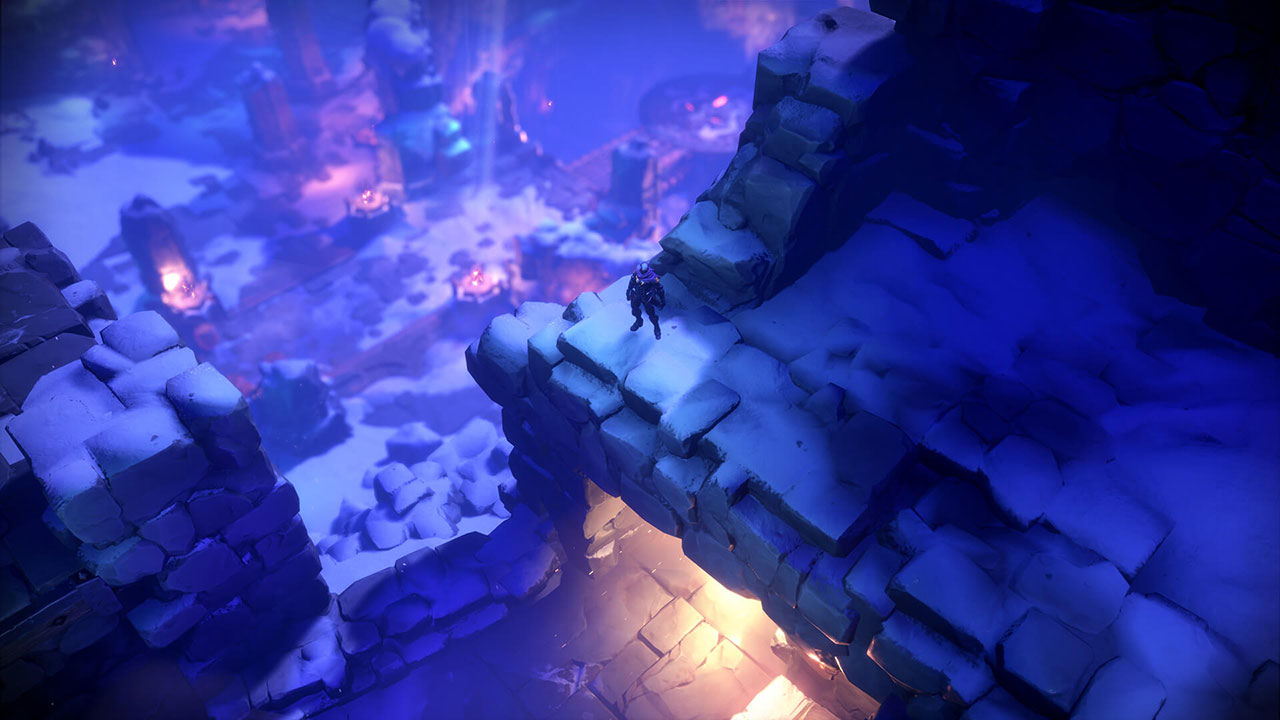 Play as War or Strife, or fight side by side in co-op

We’ve seen plenty of War in Darksiders.  After all he was the main character of the original game.  Strife, on the other hand, hasn’t been playable in a Darksiders game and this is a great spot for an introduction.  The characters themselves each play quite differently when it comes to movesets, but those who are familiar with War will be right at home with some of his moves from the original game.  He’s a big melee bruiser with a massive sword and plenty of powerful attacks.  In fact, Darksiders Genesis and War in particular feel very familiar to the original games in terms of movesets and abilities.  It all just plays out from a different camera angle.  Strife, on the other hand, is more of a ranged character who uses pistols to take enemies out from a distance.  He plays something like a Demon Hunter from the Diablo series.  Each of the characters have numerous unlockable moves and upgrades to their abilities.  Each have a massive skill tree that you can slot in collectible items called Creature Cores, which are the main loot item that has character progression tied to it.

The combat itself is certainly competent and somewhat varied because of your ability to switch between these two characters on the fly.  It does run into a problem with the reuse of enemy models, making the combat feel repetitive and a little boring at times.  There are some fun boss battles though.  Some of these bigger battles are memorable because of the boss design themselves and the environments or settings that you fight in.  However, even some of these fights can feel samey as well.  What does keep you grinding through the combat is the progression systems at play in Darksiders Genesis.  While you might look at it and make the assumption that this is a loot based game like Diablo, it isn’t.  There aren’t really any collectible loot items or character loadouts, per say.  Instead, you collect the aforementioned Creature Cores to increase the power of Strife and War.  There are also a handful of weapons and weapon mods that you’ll collect along the course of the campaign. but you won’t be grinding out dungeons for armor or weapon sets in this game. 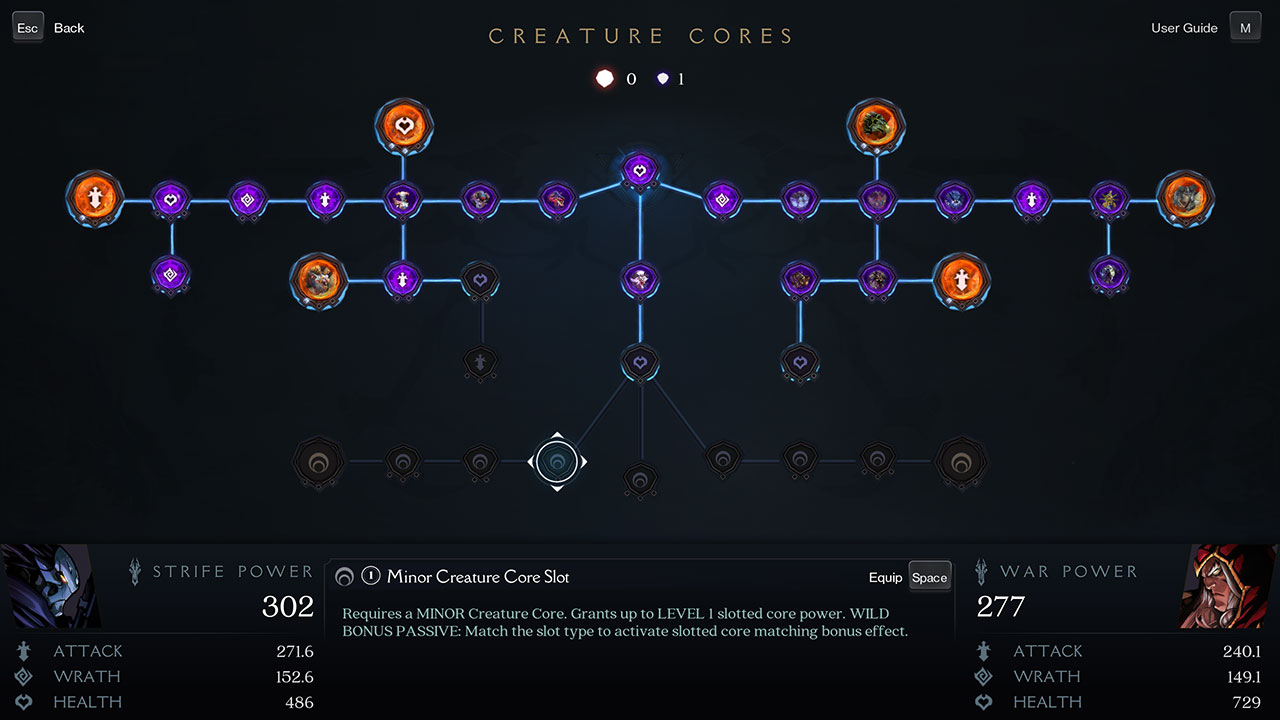 The progression is a little bit confusing at first, but quite good once you come to grips with what it is and how to use it.  Collecting Creature Cores increases the power of the characters and these can be earned by simply defeating enemies big and small.  They have multiple levels and can be slotted into corresponding tiered slots. The more efficiently you use the cores the higher your power will go, and that’ll go a long way in tackling levels as they have specific recommended power levels associated with them.  While you won’t be looking for Diablo-style loot in Darksiders Genesis there are plenty of  collectibles, from multiple currencies that can be used to purchase items from vendors, to character specific upgrades, there’s no shortage of things that you can use to tailor the two characters to your liking.

Levels are an interesting mixture of beautiful and confusing.  Maps are almost useless and very hard to read and there’s no mini-map to help you along the way.  It’s an interesting design decision, and one that I think makes the game a little bit less straight forward than it actually is.  The biggest culprit in this confusion is the decision to not put a “You Are Here” icon on the map.  Instead, you basically have to figure out where you are and where you need to go.  The times where you do become lost aren’t often, but when they do occur it feels like it could’ve been avoided if there was a little bit more clarity in this facet of the game.  That said, the levels themselves are varied and beautiful, with a number of different environments and settings that you’ll encounter along the way.  When you do have to go exploring though, that’s when you can see a clear lack of polish.  The more you do need to poke at the edges of the game, the more you’re going to encounter the problems like clipping through the world or getting stuck in the map.  There’s also no shortage of moments where the foreground of the world blocks your view of the combat or exploration. 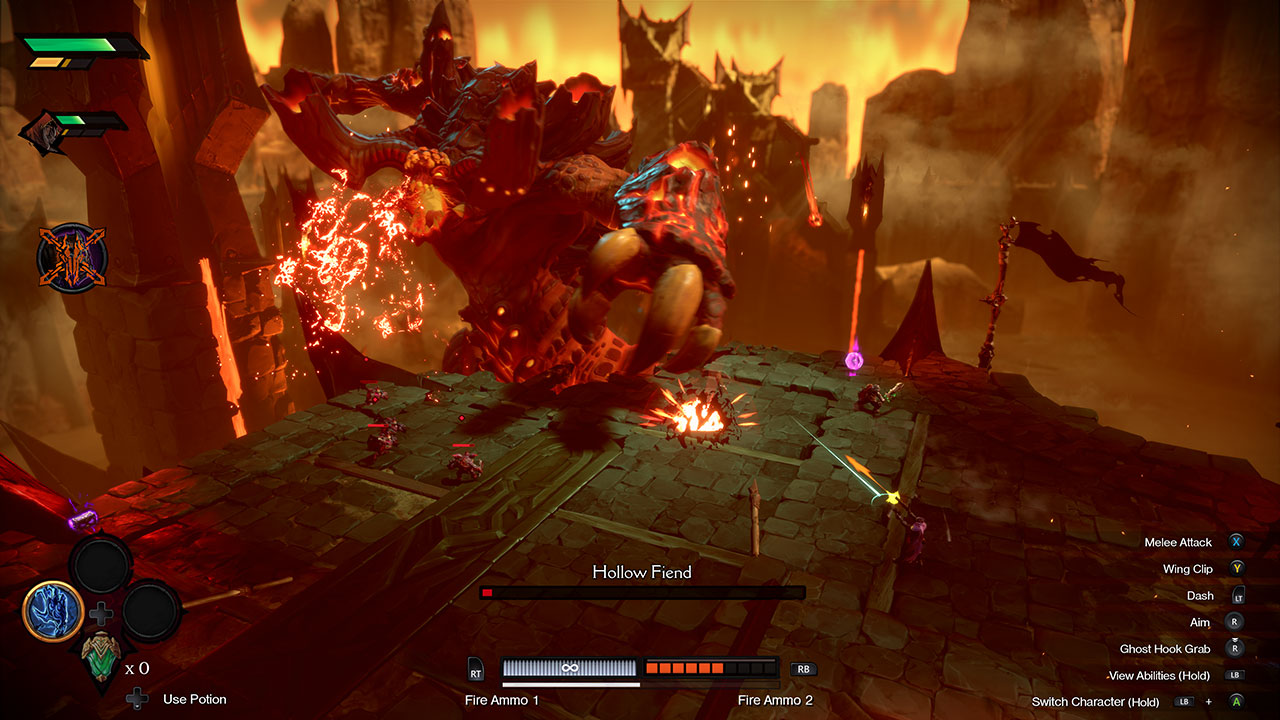 While they might have set out to make a spin-off of the Darksiders series, I actually enjoyed this one more than any since the first game. Darksiders Genesis has the look of a Diablo clone, but this really is just a Darksiders game from a different perspective.  Almost every presentation aspect stays true to the roots of the series, and most of the gameplay systems stay true as well. It’s hard to imagine any fan of any of the Darksiders games not enjoying Genesis.  It definitely hammers home on the strengths of the franchise and brings the playable characters full circle with the introduction of Strife.