Day of the Tentacle: Remastered Review

The latest news in the world of video games at Attack of the Fanboy
March 20th, 2016 by Louisa Bhairam Twenty years since the initial release of Day of the Tentacle, Tim Schaefer’s debut game has been remastered and is ready to delight us once again with its ‘zany’ genius. With LucasArts sadly no more, Schaefer’s new team at Double Fine are responsible for the remaster of DOTT, as well as another LucasArts favourite Full Throttle also due to for a reboot and to be released in 2017.

Day of the Tentacle follows Bernard, Hoagie and Laverne as they try to save the world from an evil Purple tentacle, who after drinking toxic sludge decides that he is set for global domination. His creator, mad scientist Dr. Fred Edison decides the only way to stop him is to kill Purple tentacle and his brother Green. Green recruits the help of his friend Bernard Bernoulli and his housemates Laverne, a loopy medical student and Hoagie, an overweight roadie.

Dr Fred decides the best thing to do is to send all three to the day before in order to prevent Purple from having the sludge, but he messes it up and each character ends up in a different time, Laverne in the future while Hoagie is 200 years behind, and Bernard remains in the present.

Day of the Tentacle was one of the old school 90s games to use the point n click ‘pick up, walk to’ aesthetic, but in the remaster this has been replaced by a wheel, called the ‘verb dial’ which appears when you click on an item. The verb dial indicates all the interaction you can have with this particular item, and was also used in the remakes of the Monkey Island series. Using the verb dial means a more flattering space for the game too, and it now benefits from a much improved aspect ratio.

Speaking of Monkey Island, for some reason DOTT makes a better transition into its new form that MI ever did. As DOTT was already a playable cartoon of sorts, the changes don’t seem as severe as with MI, and it remains more loyal to the graphics that garnered it’s huge following to start with -which is a very good thing. If you feel nostalgic for the old pixels, or have never played DOTT before, you can switch between classic mode and remastered mode with the switch of a button which really emphasizes how much work has gone into this remake. Switching to remastered mode feels like wearing glasses for the first time, and it is an excellent feature to refer to throughout gameplay.

The music, sound effects and voiceover have also had a remaster, but again you can choose between modernized and classic modes. Little touches like this are simple but really show that Double Fine had both their old fans and new in mind. If you choose to play in Remastered mode, you are in for a treat. The graphics move seamlessly and gracefully, while the music is clean and, as always, sets the tone of the game perfectly. 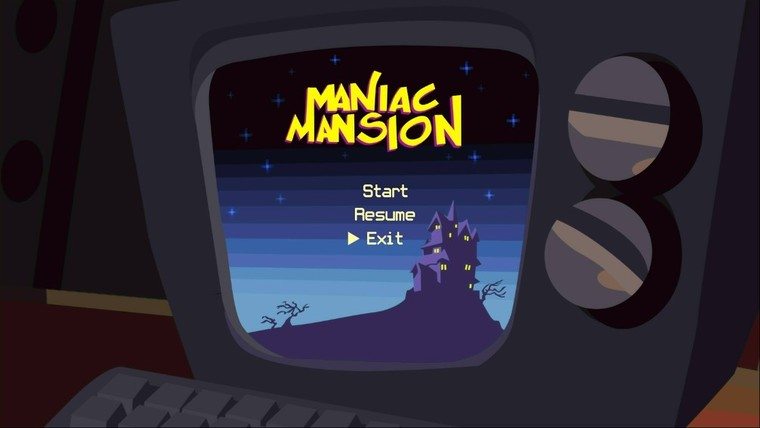 Something which is not new but needs to be mentioned is the ‘game within a game’ you get with DOTT. For those of you who don’t know, DOTT is a sequel to Ron Gilbert’s Maniac Mansion, which has long been regarded as one of the best survival adventure games of all time(as well as one of the first). When playing DOTT, you are able to play a full version of Maniac Mansion on a console resembling a Commodore 64. If you really want a history lesson in gaming, this is a feature not to be missed.

Another feature which can’t be missed is the commentary from the original creators Tim Schaefer, Dave Grossman, Larry Ahern, Peter Chan, Peter McConnell and Clint Bajakian. Use this alongside another neat addition which is the concept art browser, and you will be well on your way to understanding what gave this classic game its cult status.

One thing which gladly has not been changed, are the laugh out loud moments of genius humour which are present in all Lucas Arts adventures. Whether it’s Bernard’s nerdish charm, Roadie’s deadbeat(very 90s) attitude or Laverne’s quirky ways, all the characters and their interactions with others will make you giggle. It’s a game about a tentacle taking over the world, so we know it can’t be too serious. There are also some not so subtle references to other members of the Lucas Arts family including Guybrush Threepwood, Sam&Max and Star Wars(Bernard’s favourite film). These add to the mounting and underlying nostalgia already present in DOTT.

Another attribute which has not been modified, but might be easier with the new overhaul, are the puzzles. DOTT had a knack of using hard but not overwhelming puzzles and nothing has changed on this front. Those who are used to adventure games will understand no problem, and newcomers needn’t be worried. There is no time limit, you can just peruse at your leisure and work it out when it comes to you. Items are collected in an inventory, be sure to try all combinations no matter how silly they sound! 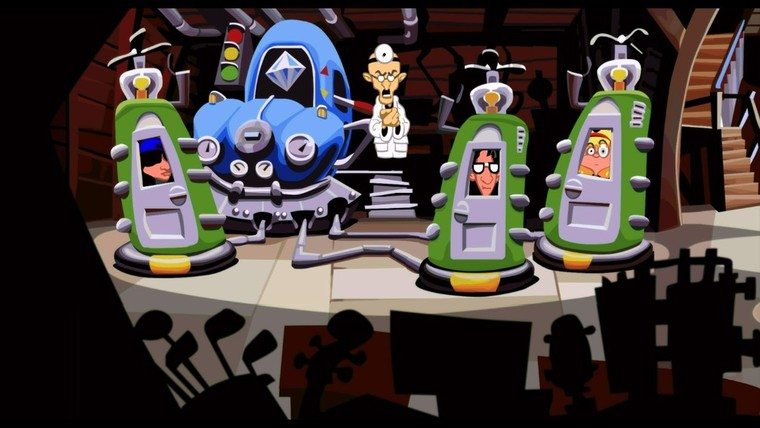 You play as all three characters across the games course, all in their various settings which is something that mixes the game up a little and doesn’t allow you to get bored. Sometimes you have to consider something in one time period, that will affect another and vice versa. It’s a very fun and varied way to play in comparison to playing solely as one person. It will also give you an opportunity to get to know the characters, and you will have your favourite in no time.

The criticisms for DOTT are things which were present in the original, the voice acting can be a little grating at times and the puzzles a bit nonsensical. The game also takes a while to get started, and when a character is speaking it can’t be skipped – meaning that if you try to interact with an item in a few different ways you get the same spiel about five times over again.

Day of the Tentacle: Remastered is a fantastic update of the original. What has needed to be updated has been, without losing the charm and cleverness of the original. Those who enjoyed the remakes of Grim Fandango and Monkey Island will be very pleased, and those new to the game will be drawn in by the craziness, humour and frozen hamsters.

Day of the Tentacle Remastered