The latest news in the world of video games at Attack of the Fanboy
Updated December 3rd, 2017, by AOTF Staff 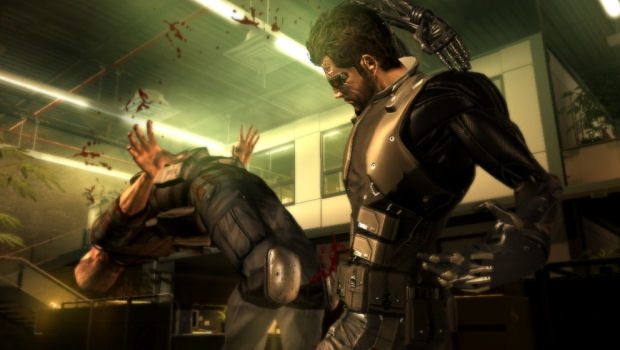 Its been a long time coming for Deus Ex fans.  The cyber punk shooter has been on hiatus for quite some time, and has been long overdue for a remake.  Tasked with the challenge of living up to what many hold as one of the best games in history, Square Enix definitely had its work cut out for them.  The original Deus Ex games painted a picture of a distant future, with a bleak outlook in a world ripe with conspiracy.  While Human Revolution takes place prior to the events of the original game, it does take on its predecessors characteristics offering gamers an immense amount of choice, in this genre blending science fiction shooter.

In Deus Ex: Human Revolution you’ll play as Adam Jensen. Jensen is an Ex-Swat member, who turns corporate security agent for a company on the forefront of human augmentation. Jensen’s top priority is to maintain security for Sariff Industries, with one scientist on staff being Jensen’s estranged girlfriend. On the eve of a major breakthrough for the company, Jensen is called to investigate a disturbance within the company laboratories, There, Jensen finds an augmented Black Ops team with a mission unknown.  Overpowered, Jensen watches as his girlfriend is killed while then taken to the brink of death himself.  Brought back to life by the very same augmentations and scientists that he is paid to protect, Jensen is re-made, fitted with augmentations that enhance his combat prowess.  Six months later your journey into the world of conspiracy in Deus Ex: Human Revolution begins.

The world you reside in is a wicked one.  It’s 2027 and mankind has adopted technology that augments and enhances their natural abilities.  The only problem is, the body rejects these enhancements and people that have them require a steady stream of drugs to stave off their bodies resistance to them.  As it unfolds, Deus Ex will have you gallivanting across the globe, doing your job as a security contractor for Sariff Industries, as well as filling in the blanks by performing side missions for friends,acquaintances, and other NPC’s throughout the game. The story is wild ride into this fictional future scenario that weaves a tangle web of conspiracy as you go.

Player choices follow suit with original games – Deus Ex once again comes back to a tried and true school of game design in giving players choices.  How you play Deus Ex is entirely up to you but at its core it’s a first person shooter.  Though you’ll find many things within Deus Ex that constantly try to prove that this isn’t your ordinary run of the mill point and shoot affair.  There is a third person cover system, melee takedown attacks, and a load of tools at your disposal in the form of unlockable augmentations that give you a number of ways to approach any given objective.  You’ll usually be sent on a mission that is fairly straight forward, with scenarios playing out in any number of ways.  The end result is a game that feels consistently fresh even if playing the same situation over and over.

Deviates from the new normal – Its been awhile since we’ve seen a first person shooter that wasn’t afraid to step from out of the shadows that the popular military shooters of today’s gaming landscape cast.  For the most part, Deus Ex’s gameplay mechanics are nothing new on their own. Peice by piece, if you’ve been gaming long enough you’ve likely played games that offer similar playstyles.  Though its the way that these things are strung together into a cohesive gameplay experience that make Deus Ex stand on its own.

Paints a grim picture – 2027 is a grim time indeed and the developers for Deus Ex paint a very bleak picture.  While technology has risen to levels never before seen, the society is on the verge of collapse.  Deus Ex touches on many things that the average person can possibly fictionalize.  There’s the aspect of corporate espionage and global conspiracy that hook you from the beginning in Deus Ex.  And once the hook is set, the writers for the game seem to let you wiggle on the line for a while before yanking, pulling, and ultimately reeling you in.

Interesting combat mechanics – Deus Ex gives you plenty of choice as I mentioned above, but there is an inherent level of stealth and precaution that must be maintained at all times.  Aside from just making your life easier by going unnoticed, when the proverbial shit hits the fan, enemies do feel overpowered if you try to take them head on.  I found that your best bet is take out who you can, when you can, by hand, while leaving the rest only to be dealt with if spotted by the enemies or a nearby security camera.  Adding to the difficulty, Jensen is constantly on the scrounge for ammunition. Between the weapons that enemies drop and strategically placed items lying around the game world you’ll certainly have options.

Even without ammo however you’ll still have the option to perform lethal and non-lethal takedowns.  These are governed by a power meter so you can only perform them when you have the required battery power in your augmentations.  It’s a constant balancing act in the combat of Deus Ex: Human Revolution, and one that is fantastic if just for the sheer wealth of possibility that it holds.

Presentation – Set in 2027 the future isn’t very bright for the our world in the eyes of Deus Ex developers.  Human Augmentations are commonplace among our species and as the story goes, humans bodies reject modifications after some time.  These life bettering alterations require drugs that stop the bodies rejection of these augmentations, and these are dark times indeed.  These dark times are represented well in Deus Ex: Human Revolution. A world awash with color, Deus Ex is not.  Its brooding cityscapes are dark and mysterious and beg to be explored when not moving from mission to mission. Objectives and items of interest are highlighted in yellow and set against a dark back drop they give the game a nice aesthetic look. Coupled with an entrancing soundtrack and decent voiceover work, the game does well to pull you into its world.

Conversation tree has no impact or relationship building – When you aren’t on main quests given by the boss of Sarif Industries, you’ll have some freedom to explore the world of Deus Ex.  You’ll meet with NPCs that will ask for your assistance, with quests that reward you with a deeper and more meaningful story in the end, but they aren’t entirely mandatory.  Interaction with NPCs that will engage you lead to converstation trees that offer multiple ways to respond, but the game offers little reason to travel down multiple paths.  Being either confrontational or passive doesn’t seem to net you much, as the game doesn’t do a very good job of punishing or rewarding you for anything you say or do.  Its a world of little consequence where Deus Ex fails to succeed at offering players levity in their decision making.  Think Mass Effect minus the Paragon system.

Cover system is hit and miss – The cover system of Deus Ex is a surprising addition to the first person mechanics, but it can feel a bit disjointed at times.  Between blind firing and the ability to hop from cover to cover it’s easy to get stuck and dropped easily by the relentlessly difficult marksmanship of the enemies.  Blind firing doesn’t really have the effect that you would like, and I rarely if ever successfully downed an enemy when using the technique.  Keeping covered is essential to staying alive in Deus Ex, and some unintentional actions will certainly rear their heads at multiple times in the game, at least they did so for me.

Hacking system misses slightly for lack of depth – The hacking system is a strange one.  It’s one that at first glance feels too complex, but after a few rounds and a handful of augmentations later, it offers little challenge.  Its hard to exactly pinpoint where the hacking took a turn for the worse, but it probably lies in its lack of challenge. The hacking mini-game is one that you’ll be playing quite often.  You’ll be tasked with securing nodes in a race against the computer security to reach a directory of access. As the computer systems in Deus Ex become more complex, you’ll need to use worms, shields, and other methods to slow down the computer security to avoid being detected and shut out from the system.  Instead of an activity that feels like a unique puzzle to complete, they end up just feeling like a time barrier to a door.  There is some challenge that comes from enemies in the area while attempting to hack and since game time doesn’t stop for you while hacking, you can be spotted mid hack and enemy AI will confront you accordingly.

Enemy AI at times can be a bit dumb – The stealth and sneaky tactics of Adam Jensen can feel like a chess game at times.  Unfortunately there are times when you feel like you are playing with a two year old.  The enemies are beefed up and considerably more powerful than you, but they’ll happilly stand in a single file line waiting for you to mow them down one by one eventhough the clearly watched you duck into a air vent.  They’ll stand around saying “I know you’re in there”, yet do nothing as you manipulate the environment to take them out one by one.  Its this type of AI glitch that breaks some the immersion of the game and take what could be a situation that feels hectic to one that is just too easy.

Deus Ex: Human Revolution shoots par for the course with this generation’s offering. A gaming landscape that has changed greatly since the franchise was last seen, many gamers have a much higher bar for the level of visuals in a game than they had a decade ago. While the game has made huge leaps from its predecessors ,  it certainly doesn’t raise the bar in terms of graphical fidelity. Though it doesn’t have to, to make it special.  The original certainly didn’t and it has been maintained by many gamers to be one of the most impressive games in history.

What Human Revolution does offer, is gameplay in spades.  Pushed on by a concept that is ambitious in this day and age of cookie cutter first person shooters, Deus Ex manages to shine because of its differences rather than its similarities.  In what is best explained as a modern day throwback, when making similar comebacks, many games fail to capitalize on what exactly made them popular in the first place.  Thankfully this was not the case with Deus Ex: Human Revolution and hopefully the franchise doesn’t go into hibernation for another ten years, as its one of the few franchises with the story and developmental vision that is worthy of working out the kinks in pursuit of a perfect game.