The latest news in the world of video games at Attack of the Fanboy
February 1st, 2017 by Maxwell Majernik 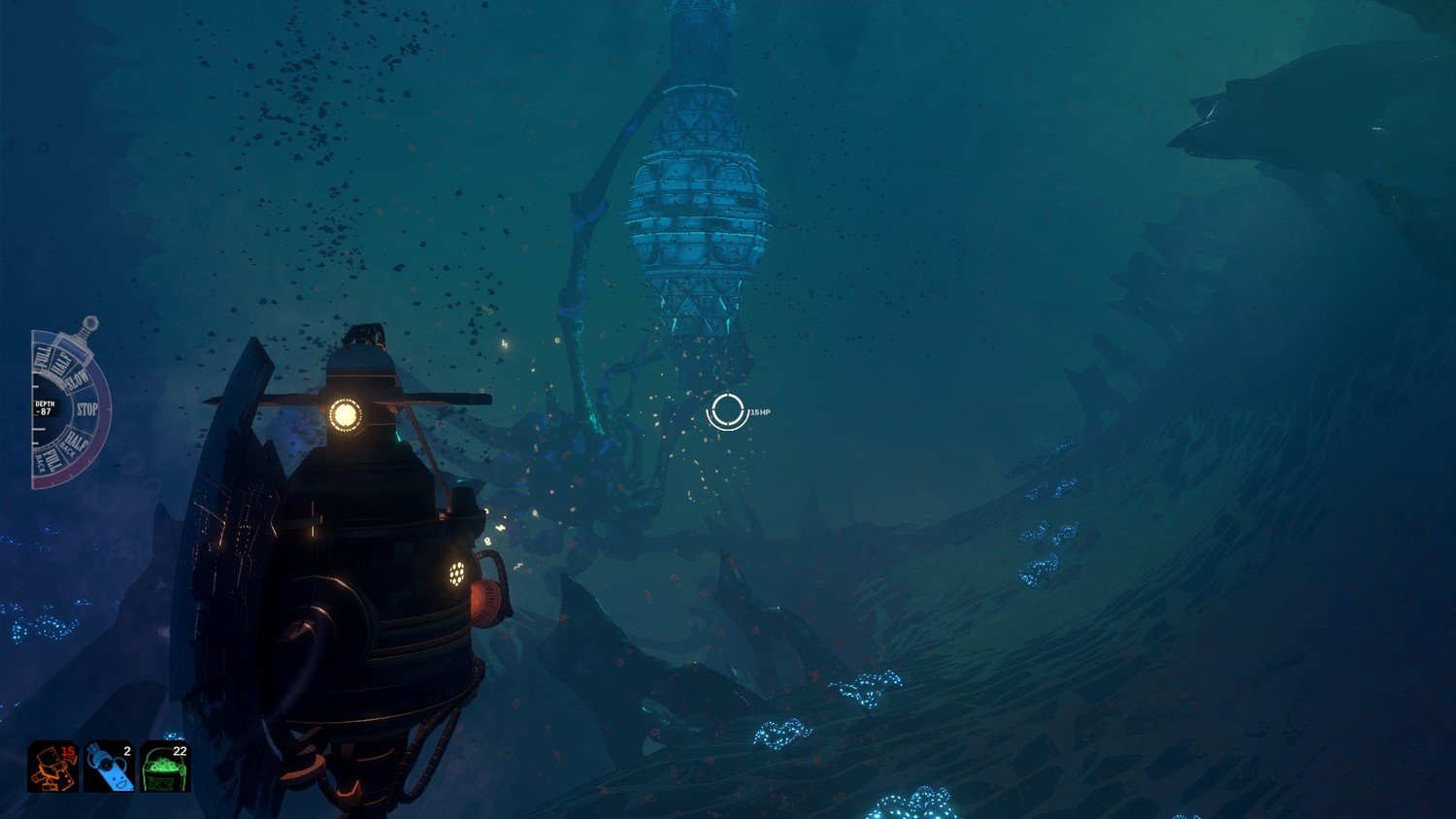 The deep blue sea has always been interesting. There is a vastness and mystery to the ocean that is unique in a world where it feels like every suface has been explored and stone overturned. As the recent trend of exploration games has put gamers into space, there seemed to be a void in ocean exploration. Arachnid Games is changing that with Diluvion. The game puts you in the captain’s chair of a submarine and lets you loose in the ocean depth.

Diluvion is a beautiful game. The art direction is extremely impressive for a small indie team and rivals some AAA games. There is a cohesiveness to the art that flows through the 3D parts of the game, the 2D parts of the game, the loading screens, the menu, and pretty much everything. It pulls from influences in different types media that haven’t been used in many games before, which is exciting to play such a new, fresh experience. I absolutely loved the story book look of the 2D perspective and the accompanying character design. They looked unique, and a reoccurring theme with the art department, a cohesiveness that brought the world to life. The prisoners dressed differently than the captains, but they had enough small details match to flesh out every area. Even small details like the item pictures had a detail not seen in many other indie games. The 3D part of the game, where you will spend most of your time, isn’t as flashy from a design perspective, but uses different techniques to make it stand out. The submarine parts focus on specific moments to make it shine. Using lighting and depth, Arachnid was able to make some awe inspiring shots within the world. When you are slowly making your way through the dark abyss and a giant silhouette of a base begins to fill up your computer monitor, it makes you stop and appreciate. The lighting is also a nice touch to the world. While it detracts from the actual game play sometimes, the light gradient put into the world looks wonderful. They also use the light in different ways like when you are slowly engulfed in a patch of luminescent coral. Diluvion was made to take full advantage of the snapshot mode on Steam.

I was pleasantly surprised by the amount of world building in the game. The world is based on a Great Flood that trapped humanity under a thick layer of unbreakable ice. A god takes pity on humanity and proclaims that the secret to saving humanity can be found in the depths of the sea. With such an epic tale of gods and secrets, there was much more to chew on than what I had expected.

The crew and base building portions of the game are fine. They don’t do anything to push those systems forward, but they are fun and add something to the game. I liked how quick you can throw extra crewmen into different parts of the ship. The plus and minus buttons were seamlessly added into the sub review screen and can change a strategy quickly, something especially important when things get heated in submarine battles.

A huge issue that weaved its way into the entire play through is the navigation. The navigation isn’t broken, but it is SO non-existent that it makes even the smallest trips full of frustration. The game uses a trail of golden fish, which by itself is a nice effect, to lead you into the correct direction. I’m still not sure what the trail of fish is there to accomplish though. It would lead me to ‘landmarks’ and important bases, but it never leaded me to an objective or a correct path in the void. The trail would also randomly turn off and on. I think it was proximity based, but it was aggravating to have it randomly disappear and leave my sub in the dark. The map didn’t take the slack off the navigation. By choice of the developers, your submarine does not show up on the map and you are supposed to find your way around by landmarks. The landmark based navigation is tough when there aren’t enough on the map, and it is tough to know how far away they are or where how deep they are. The only way to gain a sense of direction is by bringing up a compass in the UI that shows landmark icons and which direction to go. If you find enough landmarks in a small area and venture away, the icons clump up and cause confusion. The lack of an ability to update the map on your own accord made me want to shy away from exploration, which is one of the biggest draws of Diluvion. Even something like dropping breadcrumbs or adding more points on the map (you find so many other vessels or minefields that would have been perfect) would have done wonders to make the map more manageable. Games that use the environment for direction usually offers far view distance. There are moments where you can’t see 10 feet in front of you and the only thing guiding you is a small icon. It is not intuitive. In the new growing trend of difficult games, I can understand what the developers were going for, but these navigation issues make the game almost unplayable.

The vagueness continues with the missions. The very first main mission of the game has the player acquire different parts to upgrade the ship. Through the dialogue, you get very minor hints of where the items may be. A crew member advises you might be able to find a certain item at a location, but there is are no hints on where the location is. No one said “West of…” or “Go southeast until you hit..”, all I had was a name that doesn’t mean anything because of the vagueness of the navigation.

A submarine is the main mode of transport throughout the game, and with that there is going to be unique movement. The subs have different speeds (full, half, slow etc) and are based on perpetual motion. If you put the sub into full speed, then the sub is going full speed without any more controller inputs. It takes some time to get accustomed too, especially during battles, but the motions felt fine after a few hours of play. I had an issue where it was tough to gain a sense of speed. With the large areas and similar geography, there would be certain spots where I thought I was going full speed ahead and was really slow and vice versa. I hate to harp on the map and navigation, but there are no measurements of distance or way points, so you can’t even figure out speed that way either. 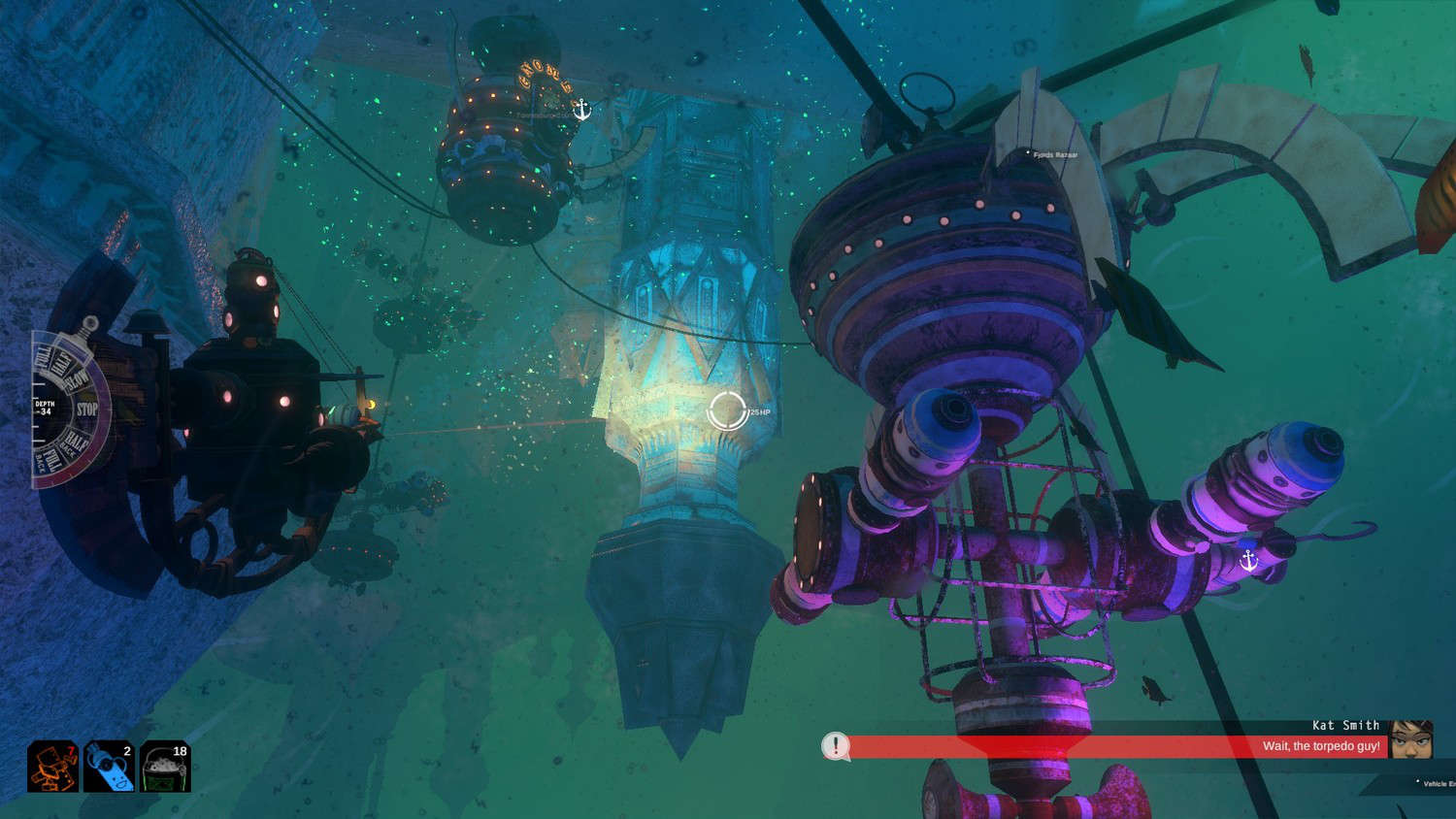 Can I recommend this game? It’s tough to say. There are some scenarios where every part of the game comes together and makes memorable moments. Those moments are few and far between with my time in the game. A certain subset of gamer that loves difficulty for the sake of difficulty can overlook a large chunk of my criticisms, and for them I say it is 100% worth playing. Until the developers patch in improvements to the navigation, mission descriptions, and ‘quality of life’ improvements, most gamers should take a ‘wait and see’ approach to Diluvion.