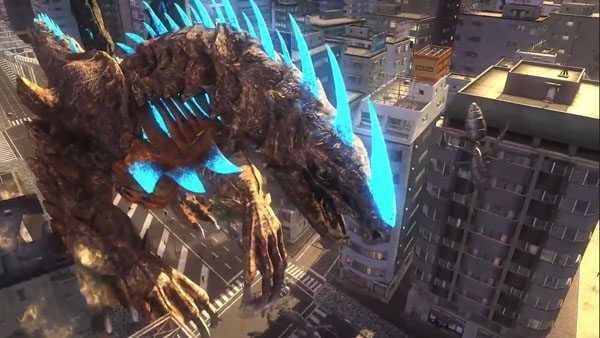 First of all, let’s talk about the graphics in Earth Defense Force 4.1: The Shadow of New Despair. Players will be hard pressed to notice that this is a PS4 game as the visuals are incredibly outdated by modern console standards. Even though this game has been touted as an “enhanced port”, it barely looks any better than the PS3 and Xbox 360 versions before it.  There are low resolution textures everywhere, and city buildings look more fitting for a PS2 game. Even the character models look befitting of a game that was released two generations ago. Some of the worst releases of 2015 in terms of visuals, Godzilla for example, manage to surpass this one. EDF 4.1: The Shadow of New Despair might be the worst looking game released this year.

That being said, the visuals may have had to have been sacrificed in order to fit so many enemies on the screen at the same time. The maps are fairly large and the player can cover a lot of distance while walking/flying around in this game. Not to mention there are dozens upon dozens of enemies for players to kill, to the point that they literally flood the entire screen.   There are some unique scenarios in The Shadow of New Despair,  like a massive army of ants that will surround you from all sides or a robotic-Godzilla looking monster or Spider Tank. More common enemies include big, hideous spiders, giant robots, drones and alien mother ships just to name a few.

The main gameplay problem that plagues this game is that the enemy types repeat over and over again to the point that it gets repetitive very quickly. In the first few levels, the player will face enemy ants and spiders. The levels then progress so that you fight against robots and alien ships. After that is done, the game then recycles the same enemies by adding levels that include more than just one enemy type.  The game lazily couldn’t bother to create new enemy types and instead just forces the player to shoot the same things all the time. The only slight variation is that the player might encounter a different type of ant or spider to kill the further they progress. This might include red ants that are more aggressive and harder to kill. Likewise, there are bigger bosses out there such as the aforementioned Godzilla monster, although the cooler enemies don’t appear often enough.

Earth Defense Force 4.1: The Shadow of New Despair is just straight up shooting 100 percent of the time

The other disappointing thing is that the levels themselves repeat as well. There are only 16 maps in the entire game, ranging from cities, fields, mountain-tops and caves. However, the main campaign has more than just 16 levels, so the player will revisit the same locations and fight the same enemies on more than just one occasion. By the time you’ve finished the game, you may have visited the same areas three or four times already.

In terms of gameplay, Earth Defense Force 4.1: The Shadow of New Despair is just straight up shooting 100 percent of the time. It’s best to describe the Earth Defense Force series as a shooting version of Koei Tecmo’s Dynasty Warriors series. Both series have hordes of enemies for the player to kill, yet both still don’t have much variety when it comes to the gameplay and missions. In Dynasty Warriors, it’s all slashing, while with Earth Defense it’s all about shooting. In other words, the gameplay gets old very fast.

However, there is some variety in this new Earth Defense Force game because the player has the option to play as one of four different classes. The classes vary in terms of skills and usefulness.

First there is the default class called the “Ranger”. This might be overall the best class type in the game as this dude packs cool weaponry such as an array of assault rifles and missile launchers. This class’ main downfall is that he’s slow, as he can only run on foot. The next class is the “Wingdiver”. This is another helpful class as this all-female group can fly. They are especially useful against flying enemies and can cover a lot of distance.  The other two classes in the game might be the weakest ones overall. The “Air Raider” can only call in airstrikes, though he has a tank he can drive. He’s only useful in assisting others, rather than dishing out punishment of his own. Lastly, there is the “Fencer”. These guys are powerful, but they are incredibly slow. Their lack of speed makes them the hardest class to play as. 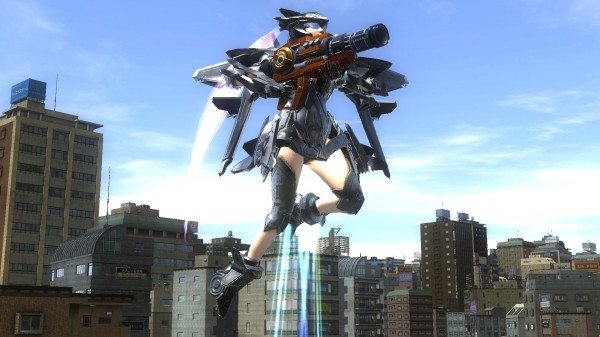 Thankfully, players do have the option of customizing the loadout for each class. This is important because some weapons are more useful in missions than others. Some missions require the missile launcher as players may need to take out an alien mother ship. Choosing the wrong weapons in the loadout might mean you cannot complete a particular mission.  The missions are also quite difficult to achieve all by yourself. Thankfully, there is both a split-screen option, or players can connect online to co-op with people around the world. The more players that join, the less boring this game is.  The game also offers a pretty pointless “Versus Mode.” This is just an offline mode pitting two players against one another in battle. It’s pretty uneventful just having two players trying to kill each other in such a large space. The game should have allowed players to have A.I. controlled bots as teammates to make this mode more exciting.

In a nutshell, Earth Defense Force 4.1: The Shadow of New Despair is a repetitive shooter that is unlikely to appeal to anyone outside of the core fan base of the series. The game has horrible graphics and the gameplay gets old after one hour.