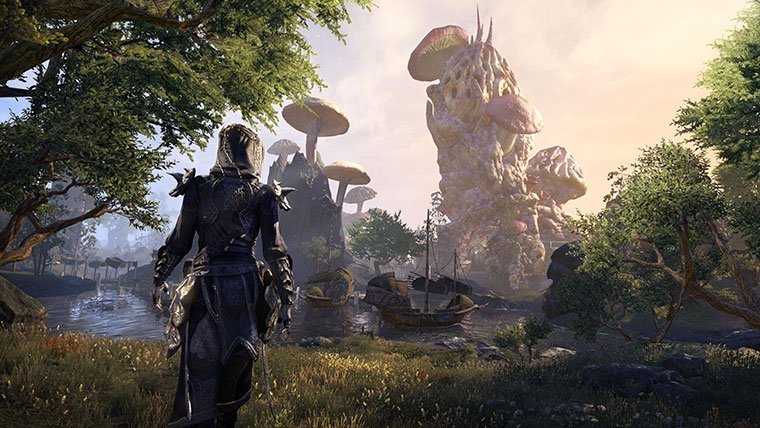 In the three years since release, The Elder Scrolls Online has sent adventurers out across the many distinct lands of Tamriel.  The MMO has offered a different perspective of the world that was brought to life across the span of over 20+ years of games.  While Bethesda probably saw their greatest success in the more recent entries in The Elder Scrolls series with Skyrim, there’s no doubting the importance of the release of Morrowind back in 2002.  This is where Bethesda essentially invented the “go anywhere, do anything”  RPG that allowed players to truly set out on their own adventures and write their own stories in the process.  They created an explorable world that was mysterious, beautiful, and varied.  So much so, that the new Morrowind expansion for ESO is a nostalgic trip back for those that played the original RPG and a history lesson for those that didn’t.

The Morrowind Expansion for ESO will take players back to Vvardenfell, 700 years prior to the events of The Elder Scrolls III.  Some creative liberties have definitely been taken here.  For those that have visited these locales in the previous game, Bethesda definitely hit the notes that needed to be hit to recreate the look and feel of the popular island without making it a carbon copy. In terms of architecture, vegetation, and the characters found throughout this massive new zone there’s no mistaking Vvardenfell’s iconic locations like the volcanic Vivec City, The Ashlands, Tel Mora, The Bitter Coast, or Seyda Neen.  As someone who had played the original The Elder Scrolls III: Morrowind, this expansion for the MMO was definitely a return to one of my favorite settings for the series.  That’s really saying something considering how old that game is.  For that world’s many distinct regions and characters to still resonate to this day is incredible considering how far games have come in terms of audio and visual fidelity.  Nevertheless, they kind of nail it with the Morrowind expansion because this world is more alive than it ever was before.

Bethesda has been fine tuning ESO over the last three years, and it’s quite a lot of fun to play in its current form.  The Elder Scrolls VI isn’t coming any time soon, and ESO weirdly feels like a nice substitute in the meantime.  It’s still not quite the same experience as the main entry games are, but it feels less like an MMO than it did previously.  While we didn’t venture too far out of the region for this review, the Morrowind content didn’t feel like it offered any meaningless quests.  Everything felt dialed-in to building the story and explaining the lore of this zone, introducing you to the characters, classes and factions of the locale.  The main story line of Morrowind will take you across the entirety of the map, allowing you to branch off into other side quests as you do so.  The dreaded fetch quests that many MMOs rely on for filler, just weren’t prevalent in our time with this expansion.  This really does make it feel like a traditional Bethesda Game Studios RPG and less what you expect from an MMO.  The One Tamriel update and Justice System has gone a long way into making this feel more like a traditional game in the series by allowing players to explore the world how they want.

That’s not to say that ESO doesn’t still have those MMO roots, because it does.  Players who really want to dig into Elder Scrolls Online will find a lot of content.  There’ve been four major DLC releases, expanding on the original game significantly.  The Craglorn Zone and Trials modes offer veteran ESO players more challenging end game content to tackle.  There are plenty of dungeons to explore with others, which can be queued for in-game.  You can buy and build housing,  you can hone your craft in a number of different skill lines, and do plenty of character customization in the game.  There are Delves and Dungeons, World Bosses, Side Quests, Guilds, and PvP…. There is no shortage of things to do in ESO that go above and beyond anything that we’ve ever seen from a main line entry in the The Elder Scrolls series of open world RPGs.  Just about everything that we just mentioned gets built out further in the Morrowind Expansion, with some completely new modes added to the game as well. 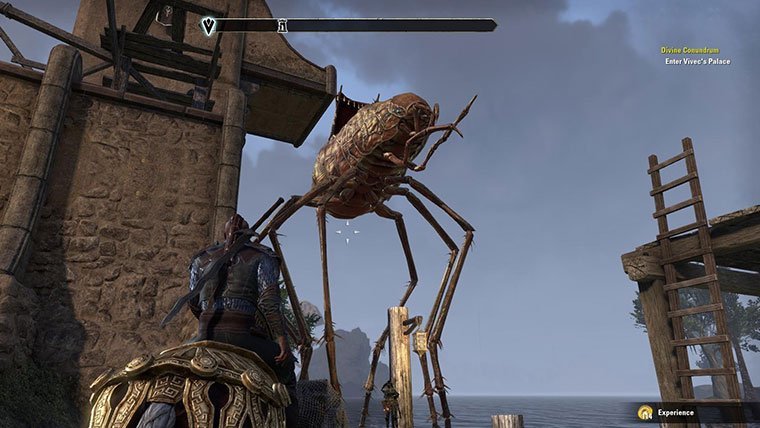 There’s a brand-new class called The Warden, the first new class the game has seen since launch.  The Warden is a jack of all trades that can be built for doing damage, tanking, or healing a group.  The Warden’s three Skill Lines are Animal Companions for damage dealing, Winter’s Embrace for tanking and damage absorbtion, and Green Balance for healing yourself and others.  That’s not to say you have to build out just one of the three branches exclusively, like any character in ESO, you can mix and match and create whatever you like.

While ESO has had their ambitious “The Alliance War” PvP mode for quite some time, the Morrowind Expansion does bring a new player versus player mode into the fold with Battlegrounds.  This new mode is very different than The Alliance War in that the battles are quicker and a single game takes no longer than 10 minutes to play.  Three teams of four players fight in small arenas across three different gametypes: Team Deathmatch, Capture the Relic, and Domination.  These gametypes are pretty much what you expect, they are ESO’s take on classic multiplayer modes.  After spending some time in Battlegrounds, I don’t think that this is the game’s strongest point by any means, but it is another in the long line of things to do in ESO. 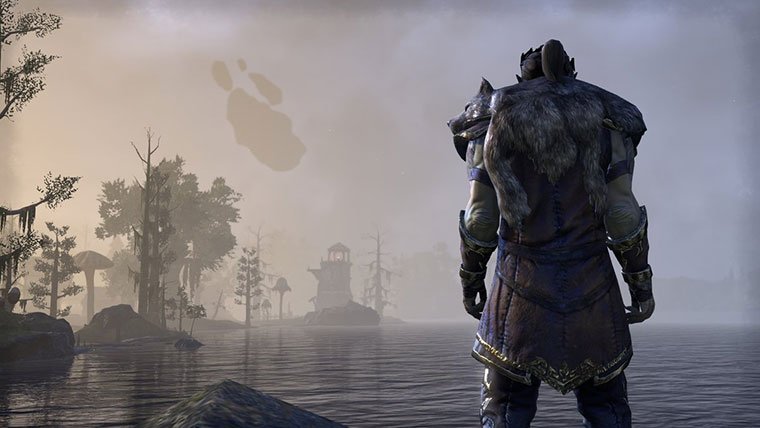 What ESO is strongest in at this point feels like the Player vs Enemy aspects of the game and in its ability to let players explore on their own if that’s what they prefer.  Group options for Morrowind includes a couple of new Public Dungeons, a new Trial for higher level players and groups, and a World Boss within the zone which players can group up to defeat.  While there are also plenty of quests for solo players as well, with a number of new Delves which can be done solo.  The point here is that there’s a bunch of stuff to do in The Elder Scrolls Online right now.  On a overall justification of price to hours of content that come with the game, there are literally 100’s of hours of things to do here for those that haven’t touched ESO before and about 30-40 hours of content for those that have been keeping up with the game as it has evolved.

The Morrowind Expansion isn’t a bad spot to be jumping into the game either.  The changes that it has seen over the years have been impactful.  I actually couldn’t remember my original credentials so I started over fresh for Morrowind and it felt good.  This gave me a chance to test out the new character class and get a taste of the One Tamriel update features in terms of level scaling.  I didn’t feel like I missed out on anything by not having played or completed all of the 100’s of hours of content that came before Morrowind.  That said, if you do end up liking what you see in Morrowind, there’s is that to fall back on.  The Standard Edition of the Morrowind Expansion comes with the base game, so it’s pretty easy to transition back to the vanilla content that came before it.  With the abolition of monthly fees for the game you can kind of just explore it at your leisure.  On the other hand, for people who have stuck with ESO and are just looking for the add-on content, the Morrowind upgrade is a bit cheaper but it might also be less fulfilling. 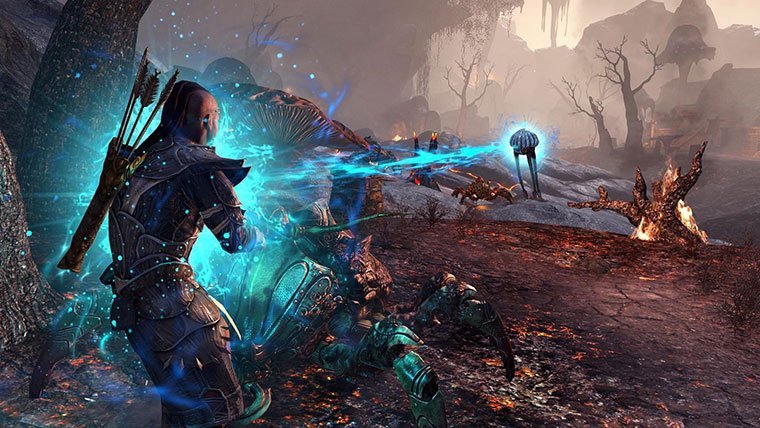 While Morrowind was the bait that lured me back to an MMO that I had previously written off,  I was impressed with both the expansion content and the game as a whole.  Heading back into Tamriel for the first time in a couple years ESO feels more like a traditional Elder Scrolls Game than it has in the past.  The story elements of the game are worthwhile for fans of the series, and it captures the essence of those Bethesda Game Studios RPGs while also satisfying those looking for a deeper MMO experience.

Bethesda has done a great job of recreating one of the franchise’s most iconic locations in the Morrowind Expansion for ESO.  It’s also a good showcase for just how far this game has come in the last few years.