The latest news in the world of video games at Attack of the Fanboy
November 9th, 2015 by William Schwartz 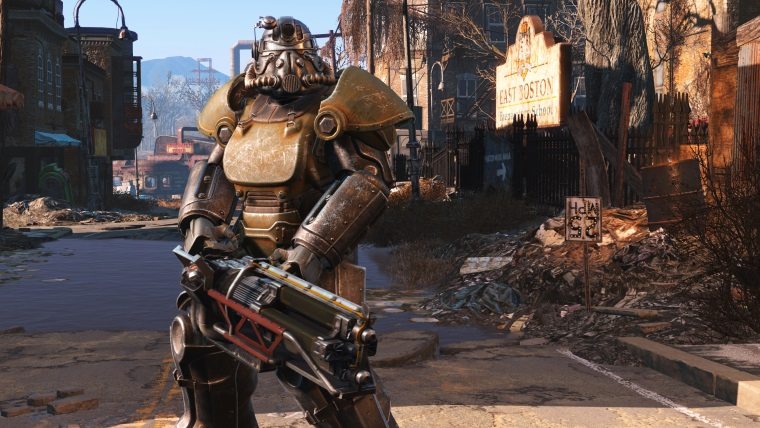 Bethesda Game Studios’ role playing games almost always have a few things in common.  They feature massive worlds to get lost in and are usually filled with bugs and glitches, sometimes humorous, often not — it’s become a point of contention among players of their games.  On one hand, Fallout 4, is an impressive game, a massive game, with so many features and systems that have been added to better the experience —  One that finally sees the developer giving players a reason to keep players pilfering through their worlds, one that in many ways is a culmination of their efforts over the last decade. On the other, it’s a hot mess.  Given Bethesda’s track record, it’s exactly what you should expect from a Fallout game.

Technically though, Fallout 4 can be downright bad in spots.  It’s got ridiculously stupid AI, game crashing glitches and bugs, and frame rate drops on the Xbox One and PlayStation 4 that make it nearly unplayable at times.  (The PC version didn’t seem to have these same issues, at least in the framerate.)  If your idea of a good game is one that features none of these things, Fallout 4 isn’t your game.  None of the Bethesda role playing games would’ve been your thing though.  It’s not what’s wrong with these games that players come to love, it’s what’s right, and they do get a lot right in Fallout 4.

While this story starts out somewhat differently than previous games, Fallout 4 gives you a brief glimpse at life in the Commonwealth pre-nuclear devastation.  It also sets the stage for a story that has you tracking down your son’s kidnapper and wife’s murderer.  After awakening from a cryogenic sleep, you’ll find yourself in somewhat familiar Fallout territory — your character is alone in a dangerous, hostile, and new world where Super Mutants, Raiders, and radiated monsters lurk.  You’ll quickly align yourself with a group called the Minute Men, whose intentions seem set on helping folks in the Commonwealth Wasteland, and we also get a first taste of some of Fallout 4’s biggest new features.

These features are the crafting and management aspects of Fallout 4, the biggest addition to what is almost an entirely familiar experience.  Now, players can align themselves with settlements across the wasteland, give them shelter, defenses, food, and supplies.  This system feels like a natural solution to a problem that both Fallout and The Elder Scrolls games have had over the years, in that players are collecting tons of junk, and now they have something to do with it.  Breaking down all that useless stuff that you’ll find on your adventure has a layer of gameplay associated with it now, giving you all the more reason to scour each and every nook and cranny of this massive world.  Recruiting new settlers to these locations, you can assign them jobs like tending crops or defending the settlement, but it all feels a little half baked.  There’s really no reason spend the time building and tending to these settlements if you’re focused on main path story elements.  There’s also very little communicated to the player about these systems, how they work, and how they should be used.  A baked-in tutorial could’ve worked wonders, but as it stands it felt like more of an after thought. 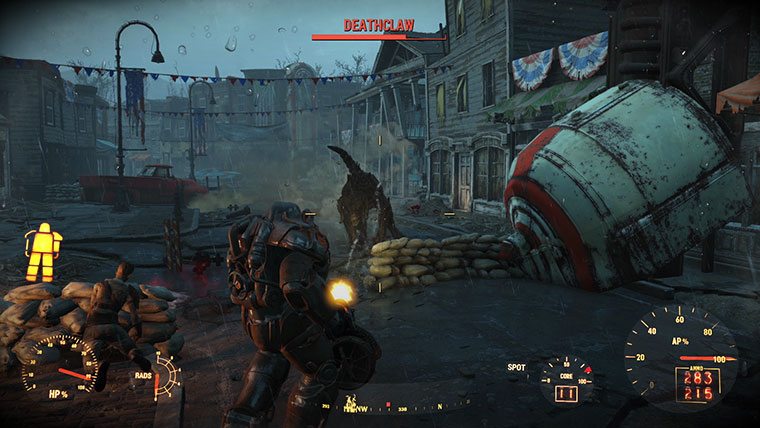 That said, this element of the game is impressive in that it gives players even more to do in the world, on top of the exploration, main path story and side quest elements.  The main story of Fallout or Elder Scrolls games has always been secondary, for some players, to the sheer amount of time that can be chosen to put into these worlds doing other things.  While Fallout will allow you to explore to your heart’s content, this aspect of the game gives you a reason to come back, kick your feet up, and enjoy the fruits of your labor.  You can really dig into Fallout 4 and make it your own.  Those types of players will absolutely love this aspect of the game, and I can’t wait to see what people make with these tools.  But if you’re just looking to head down the broadest street, Fallout 4’s main story will take you between 20-30 hours to complete at a brisk pace.   There are a number of stand-out missions in the main story, some that feature larger scale battles between warring factions that are a first for the series.  Some are more intimate or mysterious.  While others include puzzle solving elements.   There’s a good variety to the mission structure in Fallout 4’s main storyline, but it’s almost impossible not to get sidetracked at some point though.  Whether that be going off into uncharted territory to see what’s hiding in specific region of the game’s massive map, investigating a particularly mysterious building, answering a distress call, or just running into other inhabitants of this world.

Much of Fallout 4 is centered around the rebuilding of the Commonwealth, but you’re gonna have to break some eggs to make an omelet.  Fallout 4 is still very much a first person shooter RPG.  While previous games might have relaxed on the shooting part a bit with controls that were difficult to wrangle with, Fallout 4 feels a lot better in this regard.  That’s good, since many missions ultimately boil down to you needing to defeat enemies while managing ammunition supply, endurance, health, and any buffs that you’re using for a particular fight.  It also sees the return of the VATS targeting system, which allows you to slow down time for a bit and target specific points on an enemy.  Both VATS and the straight first person gunplay are viable options, where previous games VATS seemed to be the more reliable of the two.  Combat in Fallout 4 is much better than the previous games because of better first person gunplay, but it’s also one of the spots where enemy AI constantly fails.   Another thing that changes up combat and exploration to some extent is the bigger inclusion of Power Armor in Fallout 4.

Power Armor plays a much more central and upfront role in this game.   This suit of armor allows you to soak up rads, tackle tougher enemies and venture into areas that you might not have been able to tackle without.  You’ll get your first suit fairly quickly, but you’ll soon find out that the items that power these suits of armor are finite.  Like everything else in this game, Power Armor is customizable and degradable.  A base armor frame will give you the ability to add parts to it, and you’ll find those only by exploring the world or completing specific missions.  It’s just another layer of management and customization, a theme that is continually reinforced in Fallout 4.  Run out of juice for the suit and you’ll be left in a low power state, which is similar to being over-encumbered.  Your only options are find another fusion core to power the suit, walk incredibly slow, or ditch the suit and come back for it later.  It’s an interesting system, but one that allows you to gameplan for big fights in ways that we haven’t seen before. 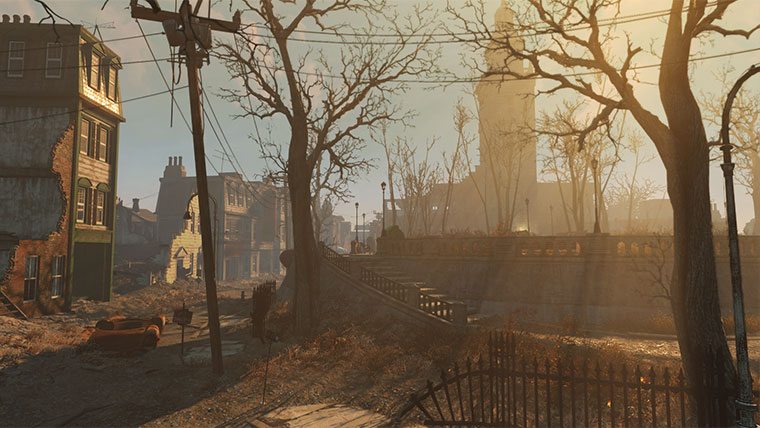 The gameplay systems, old and new, come together well to form one of the most comprehensive and deep open world games to date.  Though it would be nice to see Bethesda move forward some.  With the AI issues that crop up often, graphical issues, and re-use of many of the systems from previous games that have seen little to no iteration in over a decade, Fallout 4 as impressive as it is, feels antiquated at times, feels like Bethesda is playing it safe instead of breaking new ground.  That new ground is probably tied to a new engine, something we’d almost certainly have to see from them with their next Elder Scrolls game if they’re to be keeping pace with the industry.  That said, standing next to previous iterations of the series, Fallout 4 looks the role of next gen title.  Its definitely an upgrade from the likes of New Vegas and Fallout 3.  There are some lighting effects that make the game quite pretty in some spots.  However, stack Fallout 4 up against contemporary open world games in terms of visuals, and it’s not going to be winning many contests.  Character models and animations appear more robotic than other games, as we see more and more facial capture work done in games to make them more believable.  It’s understandable why this might not be feasible for a game of this scope, but it’s a fact nonetheless.  And some of the issues and bugs don’t just affect visual things.  Audio issues crop up from time to time as well, which make it incredibly hard to hear character voices or conversations.  Here’s to hoping that Bethesda does get some of these thing remedied from a patch at or around launch.  As it stands, these issues didn’t ruin my experience with the game entirely, but very well could for some people.

If you’re willing to put up with some technical issues, Fallout 4 is Bethesda’s most ambitious RPG to date.  They give players better reasons than ever to go out into the Wasteland, explore, get lost, horde items, and make new ones.  It would have been nice to see the many new features of Fallout 4 more deeply integrated into the story, as some of it feels a little half-baked, under-explained, and completely up to the player to make sense of.  While it may be incredibly familiar territory, Fallout 4 is certainly a new high bar for the series when it comes to scope and scale of this adventure.