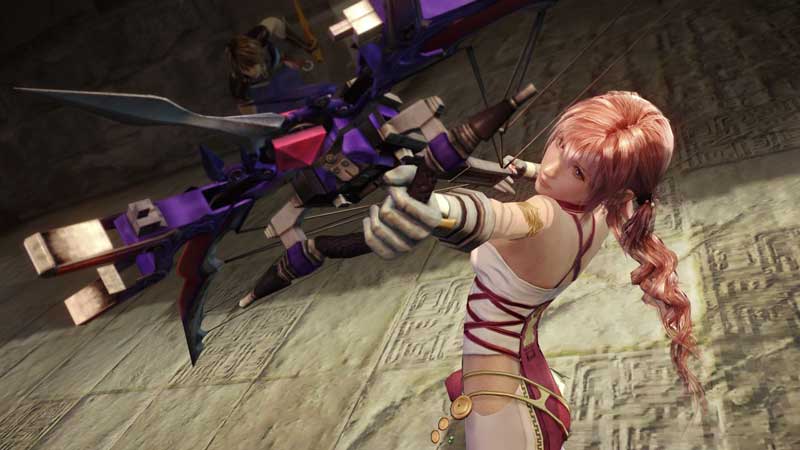 Ever since it’s announcement, the Final Fantasy XIII series has been marred with controversy. From Square Enix announcing that the game would arrive on multiple platforms, to the launch of what many thought to be an unfinished project, the latest iterations of the long running franchise have seen their doubters. These doubters however, are usually long time fans of the franchise which has seen numerous changes over the years. Over this time, Square Enix has for the most part fundamentally changed what a Final Fantasy game is, and what we can expect from them in the future. With Square Enix pleading with fans for a second chance, they’ve released the follow-up to Final Fantasy XIII with Final Fantasy XIII-2. Did they get it right this time? Or are we right back to where we started?

For what its worth, I never quite re-connected with the Final Fantasy franchise in Final Fantasy XIII. How could you? The linearity overshadowed the outstanding graphics and new battle system by a landslide. The mess of a story didn’t quite leave the lasting impression that its predecessors did, but it did introduce us to a new cast of characters to explore. Lightning, the likeable protagonist returns in Final Fantasy XIII-2 but in a much smaller role than before. Instead, the story focuses on Serah. Lightning’s sister, and the one that you rescued in the original. Joined by Noel, a time traveling do-gooder, you’re goal is to rescue Lightning from Valhalla, in what unravels to be one of the most convoluted and far reaching storylines in the franchise’s long history.

You do get what you’d expect from a Final Fantasy game in XIII-2. Cutscenes are exceptionally well done, and inspire you to continually trek onward in the campaign which can last between 30 and 40 hours. But the real star of the show is the returning battle system which is quite possibly the best in the business when it comes to turn based RPG’s. Paradigm Shift is still the major focus of combat, and the management of the resources available to your party at any time can be as hair raising as a real time battle, if not navigated and thought out properly. Switching tactics and adapting to battle changes on the fly are a fairly easy task, but outside of shifting between what works for particular enemies, you’re probably at your best when allowing the computer to work its automatic combat magic.

Much of the fun comes from the set up in Final Fantasy XIII-2. Designing Paradigms to use, and the incorporation of a monster collection to tinker with are probably the best features in the game. Noel and Serrah will be your primary party members, alongside Moogle you’ll have control of a third party member in the form of a monster that has been captured along your journey. You can level these companions and incorporate them in your Paradigm battle strategy. It’s Pokemon-esque, but it definitely adds a new layer to the combat and keeps the game fresh as you hunt down new companions that ultimately aid your quest.

Where Final Fantasy XIII-2 gets dicey is in its weaknesses. Square Enix certainly remedied the linearity complaints of the original by opening up the world to more exploration. The freedom to explore areas littered with NPCs and get a better picture of the world as you progress through it is a big part of FFXIII-2. Introducing time travel to the series, alternate realities play a big part in the game as well. Noel being from the future and determined to change its course, Square Enix uses every opportunity it can to rewrite history, and the story becomes somewhat muddled in the process. The incorporation of the Historia Crux is a powerful new feature that allows you to travel to different areas of the game that feature critical and non-critical (optional) story components. Opening up the game to more choice is definitely a good thing and more reminiscent of Final Fantasy games past.

Weirdly enough, on a piece by piece basis Final Fantasy XIII-2 manages to one-up itself in almost every department. At the same time, you get the distinct feeling that Square Enix has lost its way with the franchise, especially in the story telling department. The game is littered with moments throughout that just don’t add up. For a game that starts out as strong as Final Fantasy XIII-2 ,with Lightning battling through Valhalla, it immediately squashes all hopes of a exciting journey by beginning to loosely explain what is transpiring, and what your ultimate goals of the game are to be.

Combat systems have always had a major role in role playing games like the Final Fantasy franchise, but never has the story taken such a back seat to the on-screen action. This all important story element to the experience is the Achilles heel of Final Fantasy XIII-2. Without it, Square fails to pull you into the world in any meaningful way. We’ll have to wait and see if Square can finally deliver the full package when the all but confirmed XIII-3 releases.