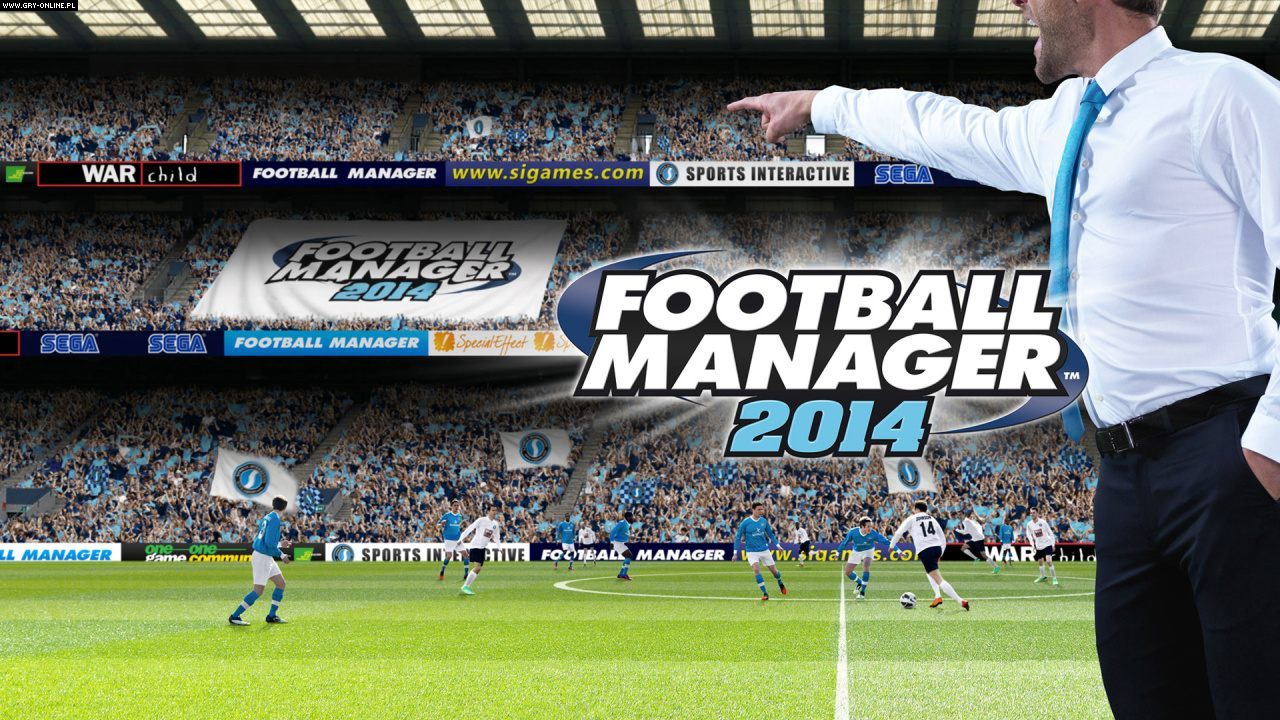 Before the birth of Football Manager, my go to game for a football management fix was the 2003/2004 edition of Championship Manager. This was partly due to my ignorance towards the Football Manager series at the time and partly due to the fact that I was attuned to the game interface. I honestly played it for nearly a decade, failing to upgrade to a newer version due to the almighty mess that Eidos got themselves into after their split with ex-partner and current Football Manager developer Sports Interactive.

For those of you who don’t know, Sports Interactive had the frame of mind to hold on to the programming data and base code after the split, rather than the ‘Championship Manager’ brand that Eidos so desperately fought for and you can see the stark contrast of the FM and CM franchises now as a result. Football Manager is an acclaimed series that has built up seemingly unstoppable momentum, whilst Championship Manager is wilting faster than my managerial aspirations in reality. Despite this, that recurring question for any sequel needs to be answered; is there enough new content this time around to warrant a purchase? This is a question that many FIFA 14 players are pondering currently and one which Sports Interactive fully intends to answer through their promised list of improvements which can be seen in this article HERE.

Enticing the apprehensive into purchasing the newest title is the objective at hand and there is certainly an exhibition of confidence on Sports Interactive’s side. An open beta is available right now through to November 4th, upon which it will close yet pass all saved data across if you decide to purchase the full title. This generous free trial period works in favour of many new users, particularly those intending to play on Linux for the first time. The increased popularity of this OS has evidently gained attention as Sports Interactive has felt the need to branch out. Pushing availability further, cloud saves are now possible on each game mode. This means that careers can be resumed on any device with FM 2014 installed via a password system.

‘Right off the bat, those familiar with the series will notice a complete overhaul on much of the interface’

Right off the bat, those familiar with the series will notice a complete overhaul on much of the interface. It is an inherently intimidating title for newcomers as information is so vast and widespread. However, highly detailed yet discreet guides are strewn throughout to provide everyone with the insight they need to fully grasp the basics by the time the pre-season friendlies are finished. There are a number of advanced tactical features for fine-tuning that may be hard to get your head around, but they are not essential to the core experience and can be picked up along the way.

As soon as you load up your first fixture, you will notice that much attention has been given to the match engine and the physics that surround it. Just to clarify, it is still a way off of being perfect, but the subtle changes that are present have definitely made it more immersive than prior attempts. Lighting effects are crisper, with character models crafted into a more human form rather than the odd sprites of yonder titles. The ball behaves in a manner more akin to real-life motion and your applied tactics seem to have a visual impact on the play when seen in match view.

FM 2013 had a number of issues with the match engine which started raising questions about the franchise as a whole, though there does seem a genuine effort on the developer’s part to remedy past issues. Funnily enough, my preference has always been the 2D classic view as I prefer the top-down perspective to get a full view on proceedings, plus it bypasses any problems that are present when using the 3D system. Additionally, stat screens have been re-designed to more compact sizes to allow further information onscreen without blocking the action. This theme of remodelling is evidently beneficial, though there is an underlying problem that has plagued the series right from its genesis and has been my main concern since diving in; game speed. 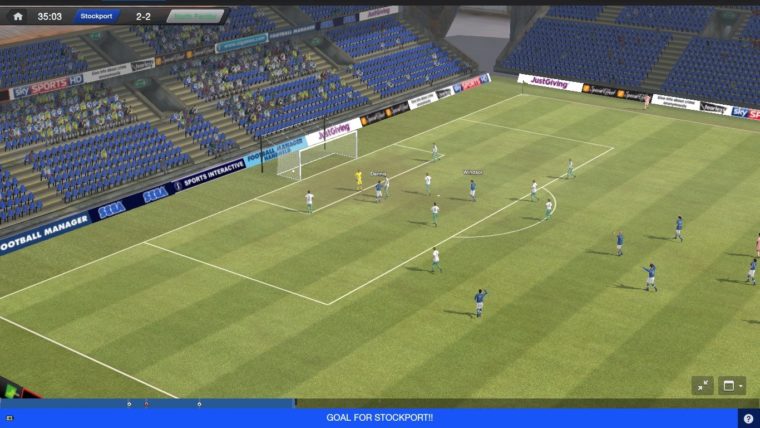 I can already sense the onrush of hardcore PC players with tricked out processors and graphics cards about to tear me a new one, though for someone with even an above average system, this is still an issue that should not be so prevalent. For every additional nation, league and team added to the database of a new career, computer performance will be affected negatively. It seems to matter little that my PC performance is rated five stars; as soon as I pick more than four nations, game speed drops to around two. There is always the option to switch to ‘Classic’ mode, which has received its own makeover with all new unlockables alongside the ability to pre-plan match tactics and a Transfer Deadline Day system for that added intensity. It is well-suited to the more casual players but I still feel like I should not have to compromise. I want the full-on experience of as many nations and players as possible, rather than having to carefully pick and choose every detail so as not to offend my machines capabilities.

You may already be re-installing FM 2013 after hearing this, but you should be aware that whilst game flow in general is still a fault, there are many improvements to this addition that contribute to overall fluency elsewhere in an attempt to counteract this. Of notable mention are advancements in transfers and contracts, arguably the most imperative gameplay aspect. A number of additional contract clauses are available to swing talks in your favour, whilst transfers can also be dealt with on a live back and forth basis. As with contract talks, you can parlay directly with other clubs to sort out transfers instantaneously, instead of the tediously slow turn-based system (although there is the option to defer back to this style if preferred).

‘As with contract talks, you can parlay directly with other clubs to sort out transfers instantaneously, instead of the tediously slow turn-based system’

Loyalty has become a managerial quality that you will need to get your head around if you are to succeed this time about. Keeping in well with staff, players and the media alike allows for much more flexibility, as you can negotiate more money from the board for those big transfer targets and also coerce your most respected players into dealing with any unhappy or jaded members of your squad. Interaction with these parties in varying discussions also presents the opportunity to fully comprehend what is expected of you, whilst laying out your own visions and goals for the future. Turning down a lucrative managerial position at another club could be the best decision you ever make, if it means fortifying the relationships at your current post.

Whilst managing the people involved with your team remains critical, the tactics you generate personally are your greatest ally. This is where I feel Football Manager’s main ‘competitor’ FIFA Manager falls down. It is aesthetically alluring, yet tactics and other input you have as a manager seems to have little bearing in the grand scheme of things. For Football Manager 14 however, every little tweak you make will shape your club in ways that you may not have anticipated. Meeting players at the end of the season to go over their future has real push and pull ability as to whether they may take lower pay to stay within your squad or simply leave. Defining position-specific roles will re-invigorate even a standard 4-4-2 formation, whilst the strategy match planning for your team is as diverse as you can possibly imagine (meaning AI managers also have more at their disposal). Mix all of these features with a news system that cuts out all the jargon and fictional spam mail from previous games and replaces it with a colour-coded, coherent database of informative updates and the picture becomes clear; this is a massive step forward for a franchise that may have just been starting to stagger.

Quite a mouthful as you can see, as there has been a lot to get through this time around. I feel like my young and ambitious Stockport County squad were settled by this point so I decided to venture into the other modes on show. I have mentioned Classic mode for those with a little less time on their hands, but wanted to look more deeply at the online and challenge aspects that are growing in popularity. 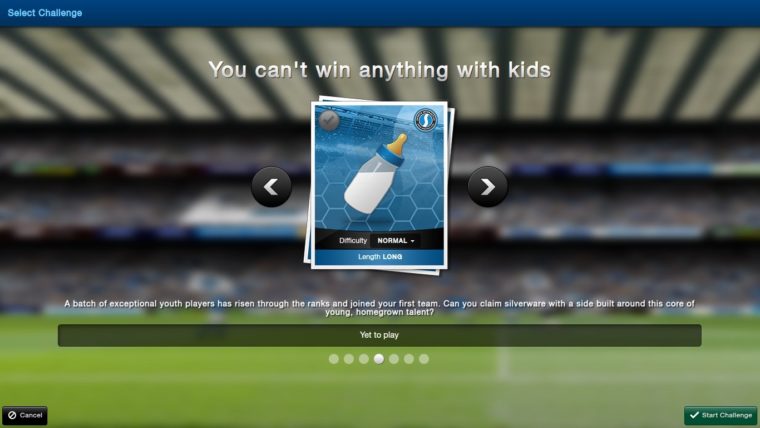 Challenge mode returns to the series, although I was quite surprised to find little had changed. The same challenges that were on offer in FM 2013 re-appeared here and I was a bit underwhelmed until I realised the compromise which I will get to in a minute. I unfortunately did not find any gamers to play with just yet (due to time of review, not my terrible personality) and therefore cannot comment at this point in time. However, I am aware that there are many ways to interact with the online community in FM 2014.

Via Steam Workshop, player created content such as logos, photos, matches, tournaments and more can be shared with a global audience. Included in this is the new challenge editor, which is rather self-explanatory in function. The Football Manager community have been tasked with creating engaging challenges to push friends and strangers alike to their limits. For those worried that this is laziness on the developer’s part, history would suggest that future DLC would contain studio-generated challenges.

The fact that it took such an extensive overview just to summarise the core changes to gameplay, really does reflect this instalment as a whole. I went in, saw the issue with game speed rear its ugly head once more and sighed in disappointment. Yet the sheer magnitude of areas that Sports Interactive can and did patch up has lifted my confidence in the franchise somewhat. Little improvements to game flow here and there have taken the edge off of the tediously slow calendar transitions, allowing me more time to actually play the game rather than watch a static image of an opposing manager’s smug grin. They have been very open about issues they are aware of right now, demonstrating an intent to fix them soon rather than adopting the ‘eventually’ attitude you see so often these days.

In all, this is a great induction into the series for newcomers, as well as an uplifting step forward for the oldies. At the very least, it is yet to crash midway through a Champions League quarter final without a recent save. Not that I am bitter about anything from FM 2013, honest.

Is the latest Football Manager a must-buy? Or is there not enough to warrant the price tag? Leave a comment below with your thoughts!