The latest news in the world of video games at Attack of the Fanboy
Updated February 9th, 2018, by AOTF Staff 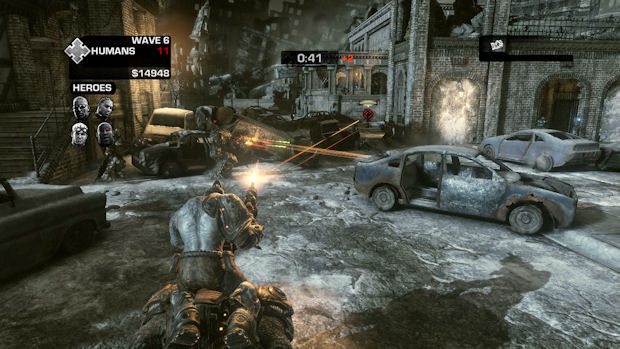 If one franchise embodies what this generation is all about, it’s Gears of War from Epic Games.  The third person cover shooter took this generation by storm with its over-the-top violence, larger than life characters, jaw dropping next generation visuals and an obscenely addictive suite of multiplayer modes.

You are in familiar territory in Gears of War 3.  You’ll once again primarily control Marcus Fenix, leader of the Delta Squad.  What has changed is the landscape of Sera.  Humanity is clinging on to what little is left on the unstable planet, COG forces have been decimated, and by all estimations, you’ve lost the fight to save the world.  Delta Squad isn’t fighting for the world anymore, they’re fighting for survival.  The  ravaged world of Sera has been infested with Locust and Lambent creatures that have overrun the civilization.  While the against all odds story isn’t something new to games, the jarring narrative that explores the emotion of Delta Squad certainly is, especially for the Gears of War franchise.  Bro jokes aside, there’s a never before seen sense of levity to most of the character interaction outside of combat.  It allows Epic to explore the less shallow sides of the Delta Squad members, and in turn, it makes for the best Gears of War 3 single player experience to date. 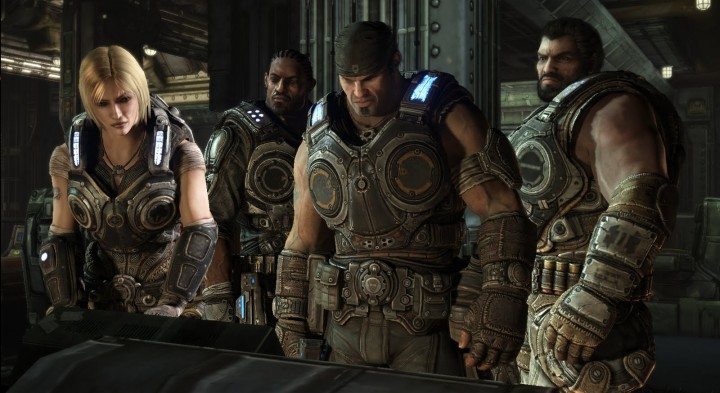 Whether you are familiar with them or not, the stories of these characters will be put to bed.  It’s clearly a selfless act, or one that measures just how confident Epic is in creating something new from scratch on the story side.  You won’t have to have played the previous games to really fall in love with Gears of War 3.  It’s as much of a narrative masterpeice as it is a technical one from the gameplay perspective.  It’s a game that will fully explore the characters throughout the 10 hour campaign, and even put you in the shoes of someone other than Marcus.  This isn’t something new for the franchise, but the way the story is told certainly is. The game will open up plenty of narrative paths, but also reward you with answers you seek at its conclusion.Now I say this not because of all the trimmings that a Gears game comes with, but because of how Epic decided to tackle Gears 3.  It’s become common practice for developers to run franchises into the ground without ever giving the end-user closure.  Sure, small plot points can be tied up, but in nearly all cases there’s always a door left open for a sequel.  For those that have been playing the franchise for the last five years, you’ll actually get what you’ve been striving towards for all this time…closure.  That’s not to say there won’t be another Gears of War game (let’s hope not), but as far as the adventures of Delta Squad, this story is over. 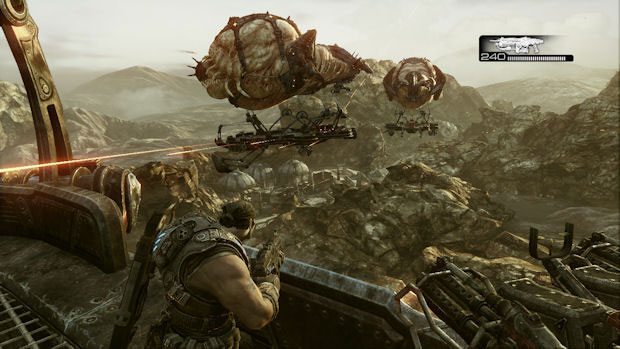 Gears of War 2 netcode aside, this story element is probably where the franchise was at its weakest.  The third person cover shooter has always had a strong grip on gameplay, ushering in a genre which had many developers trying to duplicate the success of the game.   The cover based mechanics of both the online and single player game modes make for intense gun play. While refined in Gears of War 3, these core mechanics have returned with additions to your arsenal to make for some interesting new twists in the combat.  Environments being as important to the gameplay as the weapon you are holding, Gears of War 3 showcases just how well the Unreal Engine 3 can be utilized.  With many of the game’s encounters taking place outdoors, the sprawling battlefields are littered with cover to give you plenty of tactical options to use at your discretion.  With the cover based shooting making up a large majority of the gameplay, its a relief that it not only plays so well, but that it never gets old.

If you’ve recently played either of the first two Gears of War titles, you’ll immediately notice the enhancements to the graphics of the new game.  The new splashes of color that have been introduced do well to mix up the action for your eyes.  Excellent lighting and smoke effects enhance this even further, with many enemies having distinct marking or actions when encountered.  Epic is truly the master of their domain with the Unreal Engine 3.   Many games have used turret sequences to break monotony in shooters of the past, but none have done it as exceptionally well as Epic has in Gears of War 3.  With a wide variety of these intense action moments, different weapons will be used as scenic views of Sera and brutal destruction of said turret blend into shooter Nirvana.  The simple finale of a single act is as good as many game’s final battles.

Multiplayer gameplay has always been Gears of War’s strong suit.  This is once again the case in Gears of War 3, but in a more polished way than ever before.  The gameplay feels more fun, involving less trickery, leaving a more level playing field for the Gears faithful.  Gears of War has always been a very competitive multiplayer environment, this has not changed.  What has changed is the way gameplay has been handled from a balance perspective. Poorly made maps with questionable weapon placement were complaints levied on previous titles, but this doesn’t appear to be the case in Gears of War 3.  Of course, it’s hard to tell with very little of the gaming population having played the game to find out what can and cannot be exploited.  I suppose the real test is in about a week or two.  The changes are negligible to the multiplayer gameplay, but so far, Epic has proven that true beta tests should be mandatory for all multiplayer games.  They seemed to have truly learned their lesson from previous games, and Gears 3 could turn out to be the game with the longest legs of them all because of it.  Add in  a completely revamped achievement system that rewards you with things like mutators, gun skins, characters, and other unlockables, you’ve got plenty of reasons to keep on playing any of the game’s online modes.  Even if you aren’t into unlockables, nothing is more rewarding than sawing a good friend in half.

Competitive multiplayer might not be for everyone, whether that be for the intimidation of the already experienced online community or not, Epic has included a casual playlist for new comers to the franchise.  Here you’ll be allowed to play with other lowly ranking n00bs to get your skills up to scratch before heading to the competitive environment.  Whether you find it to be for you or not, you’ll still have a laundry list of things to do and see in Gears of War 3.  The Arcade mode, which will allow you to tackle the campaign with a group of friends, will have you battling for the high score while scavenging you surroundings for new weapons and upgrades.  It’s just another way to compete with friends and will allow you tackle any of the game’s five acts.  Gears of War 2 also introduced Horde Mode to the masses, and refined as well, it returns as Horde 2.0.  Horde 2.0 includes some serious revamps to how the game is played.  Instead of simply holding out while wave after wave of Locust attackers progress, you’ll now be tasked with setting defenses to help you hold out for another wave of the Locust onslaught.  Adding money into the equation, Epic has made the mode even more enticing than it already was.  As you earn cash, you purchase fortifications between rounds.  These fortifications will help you reach a boss round, where you will be pitted against enemies like Berserkers and Brumak.  The exact inverse of Horde 2.0 is called Beast mode, which is a first time offering in Gears 3.  You’ll play as the Locust armies with a progression intact to constantly evolve into bigger and badder characters.  Each have their own unique traits that can aid in breaking down the Delta Squad defenses, and like Horde 2.0, it will require some teamwork to succeed.  It’s a great first offering of a new mode, and the different traits of each character type will have you trying out new combinations to form the ultimate squad of your own.

Now some might argue that this is the Gears of War game we should have gotten back in 2006, it’s a clear cut winner as the best offering that Epic has made in the franchise.  The attention to detail in the single player, continued excellence on the multiplayer front, and new additions to the Gears of War experience, make this one of the most well rounded games I can ever remember playing.  Easily one of the best titles of this generation, it shows off the best that the Xbox 360 has to offer on all fronts.

Attack of the Fanboy / GAME REVIEWS / Gears of War 3 Review