The series most known for its difficulty is back again. 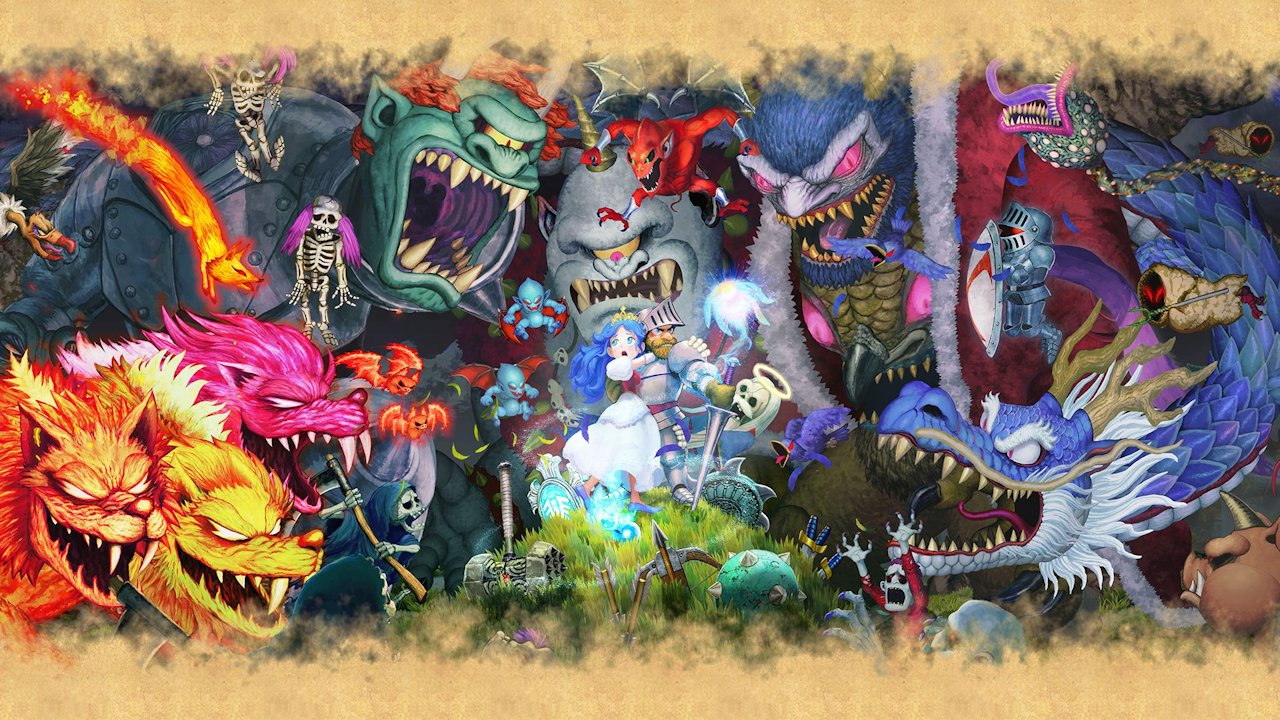 The age of the arcades back in the 1980s were built around the idea of difficult games that were designed to eat your quarters. Some of these games also made it to home consoles, which were still incredibly hard even without the need to pay for each life. One of the most infamous of the bunch was easily Ghosts ‘n Goblins, which spawned a series of games and spin-offs over the years. It has been a very long time since a true new mainline entry for the series has released on a home console, but the wait is finally over with the release of Ghosts ‘n Goblins Resurrection.

Ghosts ‘n Goblins has always had a pretty basic story where you control a knight named Arthur who goes on a journey to rescue a kidnapped princess. Ghosts ‘n Goblins Resurrection reboots the series with the same type of plot, where players are given control of Arthur yet again. The art style takes the classic designs and updates them to a more modern look, which works quite here here. This feels similar in some ways to Capcom’s take on Mega Man 11, where it felt both modern and retro at times. Screenshots really do not do this style justice either, as it looks much more fluid and natural in motion. This is paired with an exciting soundtrack that almost evokes Dragon Quest vibes and is a real joy to listen to while playing. 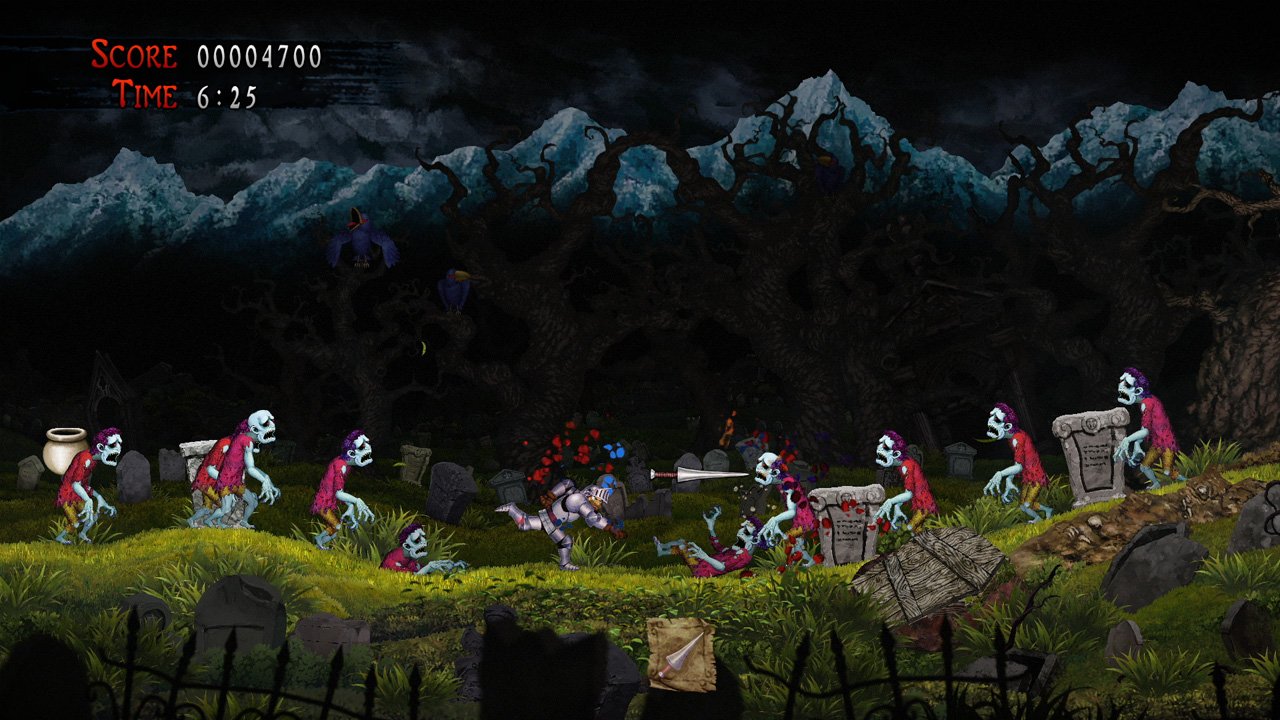 Just like in past entries, you will have full control of Arthur as he ventures through different levels and comes across multiple types of enemies. As always, there is no true health bar in the game, but rather he loses his clothes with every hit until he’s down to his boxers, which is still quite a funny mechanic for the game to have. Arthur has a pretty limited basic move set, as he can only jump or use his currently equipped weapon. There is no run button at all, which definitely slows the game down a bit. Newcomers to the Ghosts n’ Goblins series are likely going to find the gameplay very jarring as a result, because you can’t even run and use your weapon at the same time, with most of the weapons being projectiles. This can feel rather annoying at first, as it keeps you from taking down enemies on the go, instead requiring you to slow down and be more methodical at times.

Arthur starts off with his trusty lance that he can toss as always, but also has seven other weapons he can come across in the game. Similar to the old run ‘n gun shooters of the time, these items are acquired as you play by destroying treasure chests or pots that pop up. Dying doesn’t reset your weapon either, as you will keep that same weapon until you obtain another one. There are some very useful weapons from the past that are very helpful like the crossbow and discus, along with two new weapons that are a hammer and spiked ball. The hammer deals more damage but typically has to be in much closer range than you want to be in this game, so it usually is not one you will want to use. The spiked ball can be helpful as well against ground-based enemies, but it really becomes very ineffective in levels such as the one where you are moving between flying dragon statues in the air. 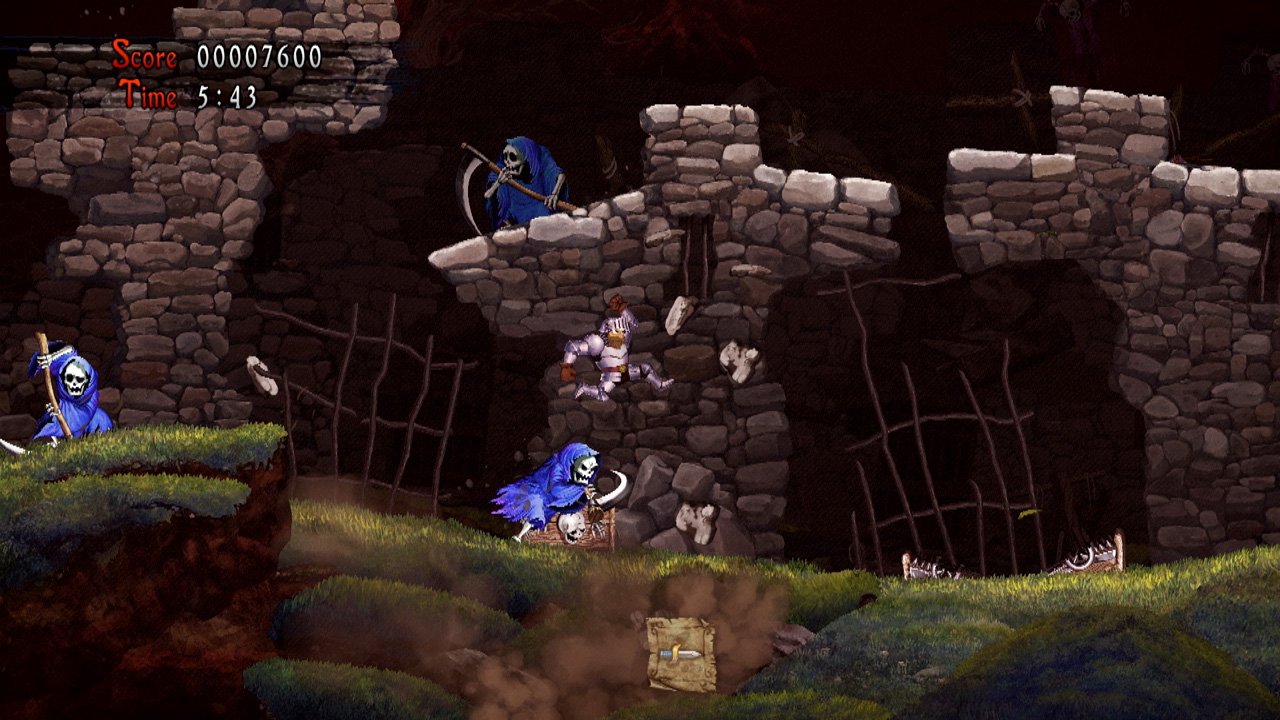 Weapons are not the only trick Arthur has up his sleeve either, as he can also use magic to help take down enemies. Obtaining these will require you to collect what are known as Umbral Bees that are hidden in each stage. Once you have enough of these, you can go to the Umbral Tree to exchange them for new and upgraded magic skills that Arthur can use. You can keep multiple magic spells equipped at one time, with you able to rotate between them on the fly. Just holding down the attack button for a few seconds will activate the magic, but you are left vulnerable and can be interrupted if you are not careful. As a result, you more often than not will probably not even bother using magic. The Umbral Tree also has some skills that you can unlock for Arthur, such as getting additional weapon slots to rotate between and more.

Ghosts ‘n Goblins Resurrection consists of five zones for you to complete, with the first few having two choices each for you to choose from. These locations will feel somewhat familiar in some ways, while also feeling completely new throughout most of them. The game starts with the choice of the Graveyard or Execution Grounds. You can choose to beat both levels, though you only have to complete one to make it to the next zone here. Each of these stages will conclude with a very difficult boss battle that will likely require you numerous tries to beat. This is because the bosses have certain patterns that you need to learn, though no single playthrough is exactly the same as the last, so you have to be ready for anything. After the first couple zones, the path gets linear and doesn’t split off anymore. The fifth zone is the final one of your playthrough, which can be really difficult with a focus on recreating portions of past boss battles. 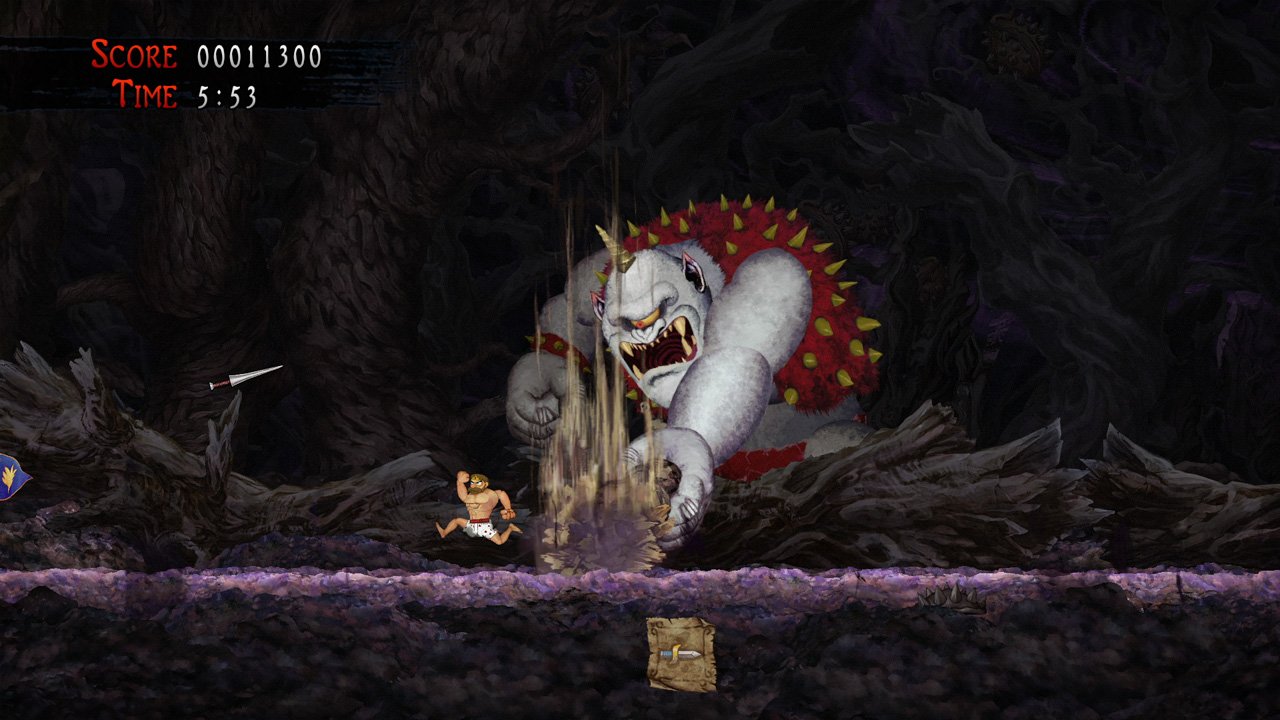 The length of Ghosts ‘n Goblins Resurrection seems very short by just beating the five zones, especially if you do not beat the alternate stages along the way. However, there is more for you to play through after you beat the game with the special Shadow versions of each stage. This culminates in a true final boss battle that gives you the real ending as well. These variant stages are even harder than your first time through, so prepare yourself for an incredible challenge. There are also Challenges found in the game’s main menu for you to work towards completing, which will keep you busy for awhile with tasks such as beating an entire stage without dying somehow.

This series is known best for being extremely difficult and Ghosts ‘n Goblins Resurrection does not stray away from that at all. Instead, they make the game much more accessible by offering four difficulty levels. The game automatically defaults to Legend, which is only going to be for the best of the best players. From there, it goes down to Knight, Squire, and Page, with the only real easy one being Page. This is due to it giving you invincibility to where you can just enjoy the game without worrying about dying. Even as the next easiest level above that, Squire is very difficult and will have you raging at the game quite often, even though the game is very fair overall. That is because like the originals, this game is built around learning the levels and knowing just how to tackle them rather than being all about speed and reflexes.

The difficulty can be alleviated in a few ways, though the game is still going to be a major challenge to most anyone. The first way are the well spread out flag checkpoints that you can respawn at after dying each time. The goal is never really to beat an entire stage, but rather to just make it to the next flag and so on until you do end up beating the level. There are some games where the checkpoints are poorly placed throughout, but the developers did a good job here. You can also utilize the Magic Metronome setting in the menu that allows you to slow down time if you need some extra help, with you also being able to add some challenge once you unlock the ability to speed up time later. 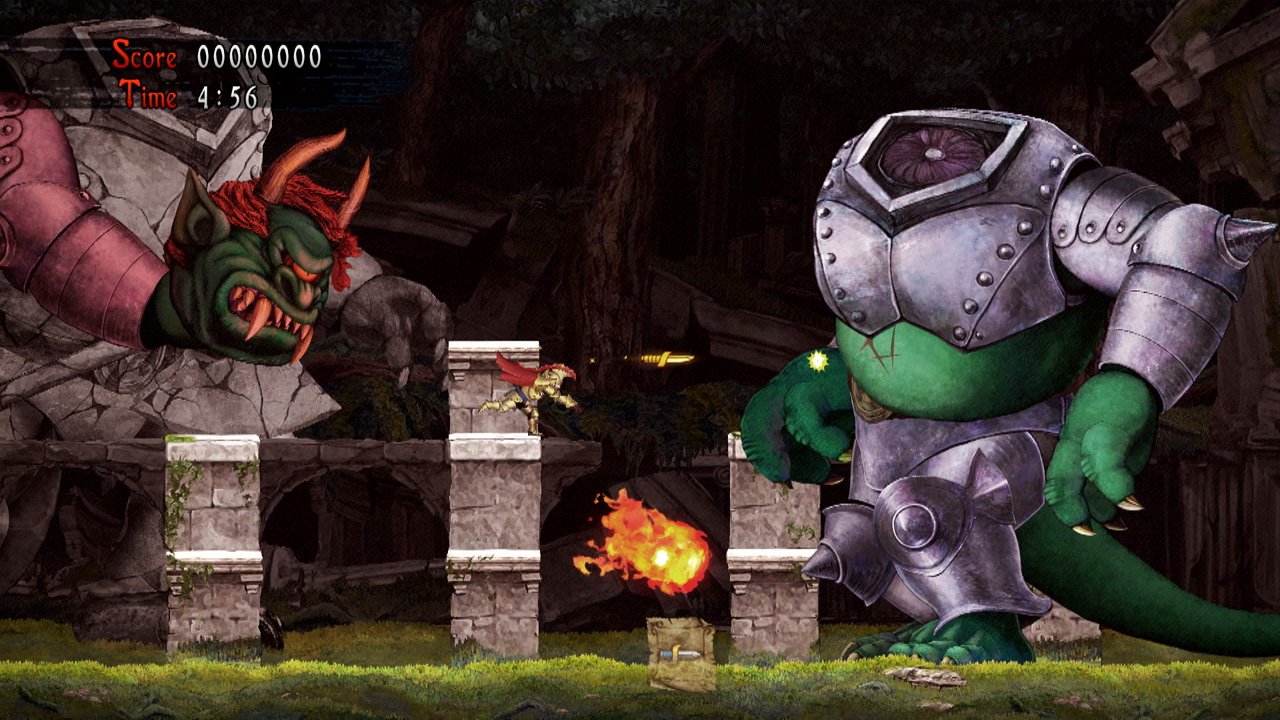 Ghosts ‘n Goblins Resurrection also adds a very welcome feature in the form of two player local co-op play, allowing you to play with a friend. Classic style games like this always seem designed to be enjoyed with a friend, so having this included is great to see. It may be a little disappointing that there is no online co-op version, but the slightest bit of lag in a game like this could very easily kill you, so it’s probably for the best.

While the gameplay itself definitely won’t be for everyone, due to it being very rooted to the past, Capcom has certainly done a good job reviving what not too long ago seemed like a dead series with the very fittingly titled Ghosts ‘n Goblins Resurrection.