The latest news in the world of video games at Attack of the Fanboy
November 30th, 2015 by William Schwartz 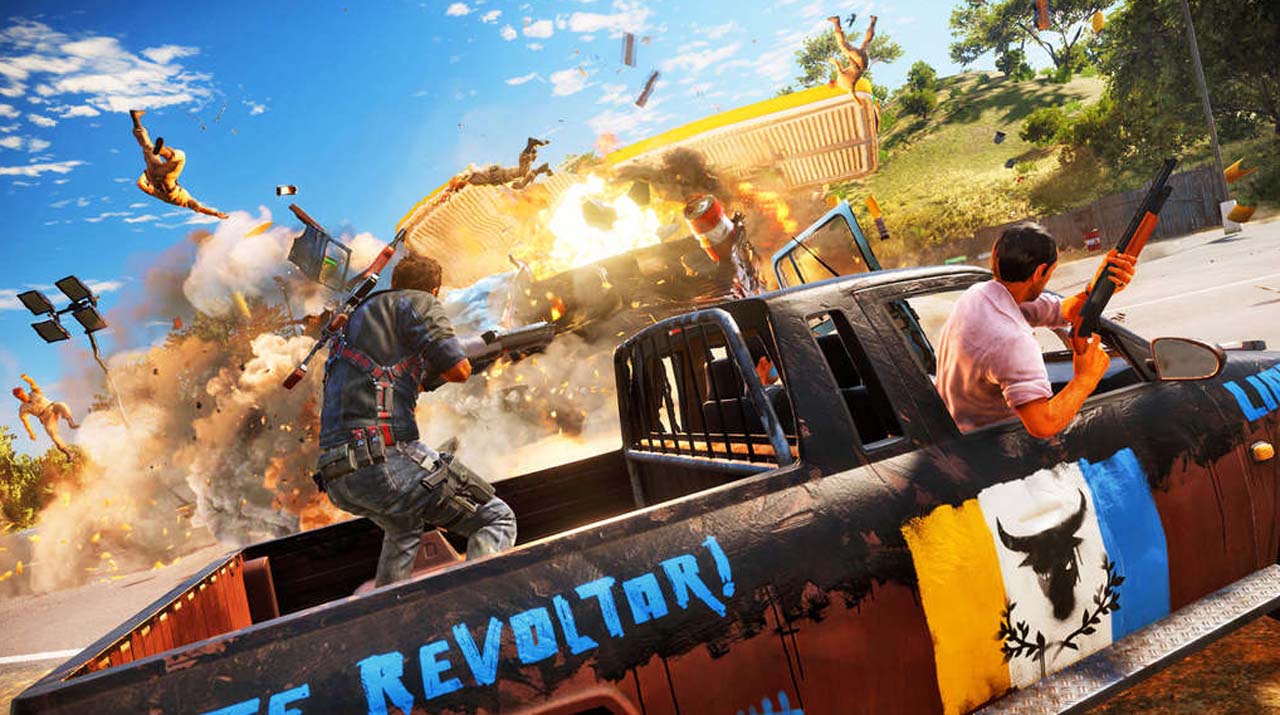 Just Cause 3 is the sequel that fans of Just Cause 2 deserve.  It’s been half a decade, but Avalanche Studios takes a generation leap for the franchise in nearly every aspect you could think of.  While Just Cause 2 was a good game in its own right, Just Cause 3 doubles down on the what made that game so enjoyable for open world fans, plus some of the fan ideas that were incorporated into the PC version of the game via mods from the community.  It’s got a massive, beautiful, physics-based map to explore, as well as a slew of weapons, gadgets, vehicles, and power-ups for protagonist Rico Rodriguez to unlock, discover, and play with in this open world sandbox.

By land, sea, or air, Rodriguez will work with the natives of his homeland, Medici, a chain of Mediterranean islands, to help overthrow a dictator who rules with an iron fist and controls a rare resource called Bavarium that could help usher him to be global power player.  Rodriguez plays the role of freedom fighter in Just Cause 3, liberating settlements, provinces, and regions across the massive game world while attempting to overthrow and squash Di Ravello’s plans. 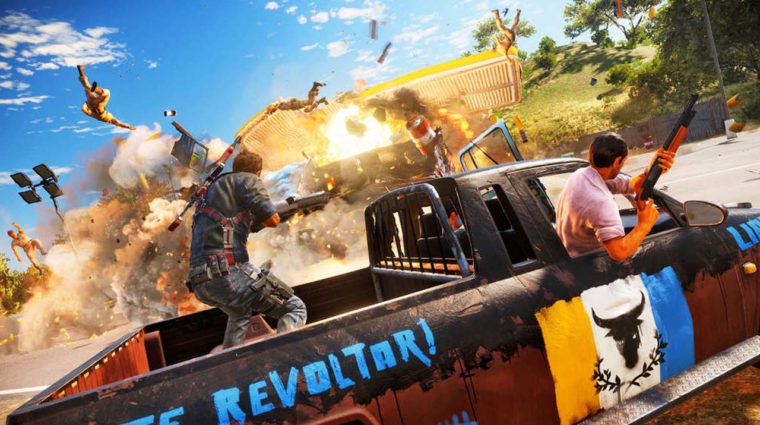 While there is most certainly a story to Just Cause 3, it plays second fiddle to the open world mechanics of the game.  Like Just Cause 2, Just Cause 3 is a playground of destruction, with a bunch of new tools to play with and a brand new physics engine that produces some amazing effects.  The end result of any mission is usually a massive explosion or smoldering destruction on a large scale.  Destruction is baked into every facet of Just Cause 3, chaos is a system of measurement for the game.  How much chaos you create dictates the points that you score.  Liberating towns from Di Ravello’s control and thwarting his plans in story missions usually entails you blowing stuff up as well.  How you choose to spend your time in Just Cause 3 is totally up to you.

Rico has a number of tools at his disposal, whether that be his wide array of guns and explosive devices, or his grappling hook that can cause a considerable amount of chaos on its own.  There are many ways that Rico can tackle any given situation.  Players can take a straight forward approach — a well placed grenade or rocket can blow up just about anything, but they can also tether items together and let physics create fantastic results. Just about anything can be tethered together, and players can get incredibly creative in the sandbox settings of Just Cause 3 using gravity and tension between the tethering devices and any number of items in the world.  Want to tether people, vehicles, structures, animals or anything else with a surface to hook onto?  You can do that.  Everything is up for grabs in Just Cause 3 for you to manipulate and cause mayhem with. 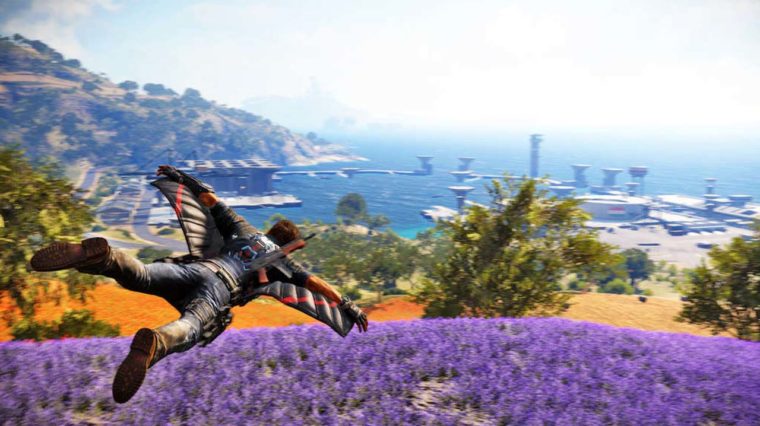 Couple this with the many different ways to traverse the world and Just Cause 3 starts to feels pretty exceptional.  Players are given both a parachute and wingsuit, and using the grappling hook in tandem with the two allow you traverse the island in any way you choose.  Sure, you can still hop in a car, plane, boat, or helicopter and get from point A to B as well, but these most certainly aren’t the best options of transport in the game.  Using a combination of the grappling hook, parachute, and wingsuit, players can travel almost endlessly, and the only real downside to it all is that it’s hard to wrap your head around the possibilities.  That’s not a bad problem to have, especially for fans of this sort of freedom in their open world titles.

The movement and destruction systems of Just Cause are a lot to wrap your head around, but they come together pretty well to deliver the player an incredible power fantasy.  These are the game’s greatest triumphs. Just Cause 3 is a game that is not only about Rico giving freedom to the residents of Medici, but Avalanche giving players freedom to do what they want in this world, with very few rules in place.  What rules are there, generally guide the player towards better items, mods for Rico to use, and to keep them from entirely breaking the game. 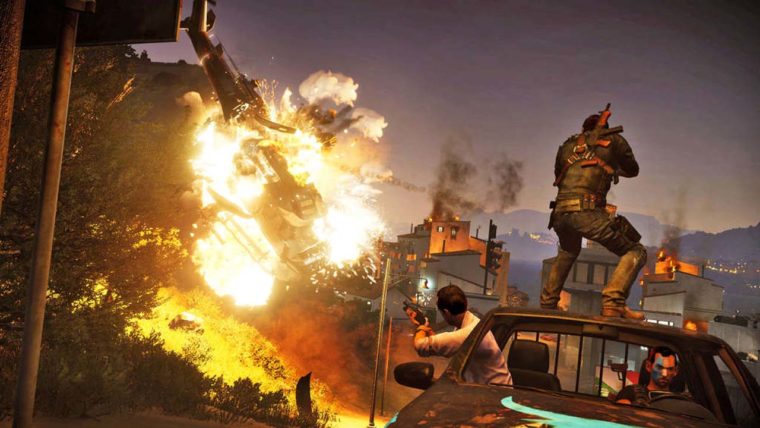 Behind this robust physics-based backbone is a system of unlocks for players to earn and use as they see fit.  Like other open world titles, there are many optional points of interest in Just Cause 3, mini-games that allow you to earn “gears” that are used to purchase different upgrades to a number of different aspects of Rico’s arsenal.  These side missions are hit and miss with some being quite fun, like causing the biggest explosion you can by hurtling a vehicle at high speeds towards a structure, or getting the highest chaos scores in a specific outpost.  Others, like driving courses or flying aren’t quite as fun as the ones that focus on the destructive elements of the game.  It’s all for a good cause though.  As you liberate towns, new zones will pop up to earn these gears, and you’ll need to complete them if you want all options available to you.  Some very important upgrades are hidden behind these, including a precision aiming mode that requires you to hit a firing range to achieve a specific score.  While it would have been nice to have some of achievable abilities unlocked up front, these side missions, or challenges I should say, are a nice change of pace.

While players are not corralled into doing things in a specific manner in Just Cause 3, the game progresses pretty smoothly for those who want to follow the story beats.  Throughout the 27 story missions in Just Cause 3, you’ll liberate plenty of towns, and ultimately regions, in the process.  With some story missions being gated with you needing to do liberation missions, which are essentially completing a series of objectives within a certain area.  Toppling statues, destroying propaganda spewing loudspeakers, causing massive chaos, freeing political prisoners and tearing down signs of the dictator’s rule are what you’ll do most of in Just Cause 3.  And while there are many ways to do this, by game’s end these liberation missions can get a little long in the tooth as you feel like you’ve been here and done that before, despite how much freedom you have to tackle them as you want. The map is massive.  The number of outposts, towns, and settlements to take back can be daunting at times, but many of the objectives stay consistent throughout the better part of the game.

The bright side about all of this is that there’s an online component to the game that constantly has you competing with other players in the objectives that you’re tackling.  This seemed to work for the most part during the early access for review, but it also meant that this single player game was always searching for an online connection, and when it couldn’t find one, it would pause the game in the middle of it while you were playing.  Thankfully, there is an offline mode.  Unfortunately, the game continued to try to connect to the online service regardless of whether you were trying to play offline or not.  The only workaround that I found during my time with the game was to disconnect from my router completely and just play with the PS4 in offline mode.  Hopefully this is patched, as some of the fun can be sucked out of the adventure by this explicitly. 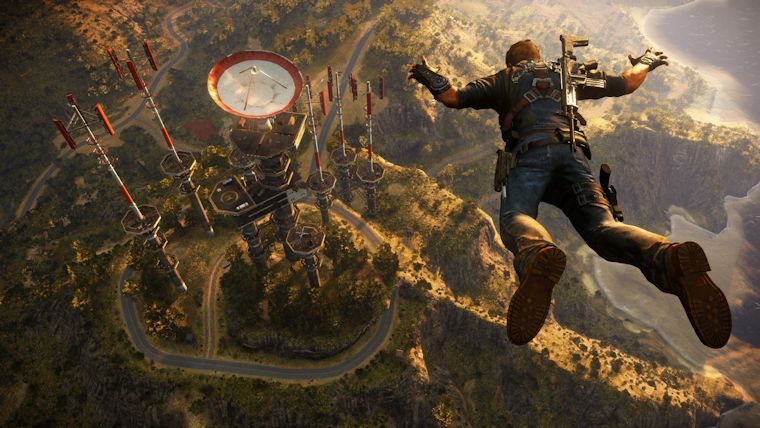 To help you along your way, there’s a rebel faction waiting in the wings. As you liberate Medici, the revolutionaries will come to your aid, and you can even call in drops for any weapon or vehicle that you’ve found so far in your playthrough. As you liberate territories, garages are then opened which allow you to store any weapons or vehicles that you find, with a few exceptions that require blueprints by completing specific objectives.  To keep players from abusing this system, all items are on a timer.  So you can’t just call in unlimited attack helicopters to tackle the harder outposts.  There are a ton of hidden or special key vehicle drops that can be incredibly helpful in your cause.  Bomber jets, assault choppers, Bavarium shielded tanks, as well as a number of interesting and powerful weapons can be found by scouring the islands of Medici.  Between liberating towns, finding powerful items, and causing chaos on a large scale Just Cause 3 is a hell of a lot of fun to play, it’s almost open world nirvana.

There’s a few things that hold it back, however.  The game is so focused on these destructive elements that some of its other features suffer. Shooting for example is one of the lowlights for Just Cause 3. There is plenty of shooting in the game, and it’s somewhat disappointing that the shooting aspects are so unfulfilling. A combination of enemy AI, loose reticule control, and no lock in system leave gunfights feeling somewhat generic. Another big part of Just Cause 3 that doesn’t feel like it got the same kind of love that many of the destructive aspects of the game is the driving. Kind of like Just Cause 2 featured poor driving controls, Just Cause 3 doesn’t get much better.

That said, the overall presentation package for Just Cause 3 is impressive on the PlayStation 4. Medici is colorful and vibrant. Explosions are some of the best we’ve ever seen, and there are some incredible large scale battles in the game that have Rico taking on literal armies of enemies. But like other games that aim for the bleeding edge of graphical fidelity for consoles, and also have gameplay ambitions, the PlayStation 4 can get bogged down by some of the more intense moments of the game. Lastly, Just Cause 3 features very inconsistent load times. Which vary depending on what’s loading and where on the map. Loading challenge levels, restarting missions, it’s hit and miss, but we’ve seen load times as long as 2-3 minutes which is excessive. Like the online connection issues, hopefully this is something that gets sorted out when the game launches.

Just Cause 3 is one of the best open world games of 2015. Avalanche Studios gives players endless possibilities in this sequel that one-ups its predecessor in nearly every way. While it’s not quite as well-rounded as it could be with mundane driving and shooting segments, its destructive aspects and freedom given to the player epitomize what’s great about the genre.