A good reason to dust off your 3DS. 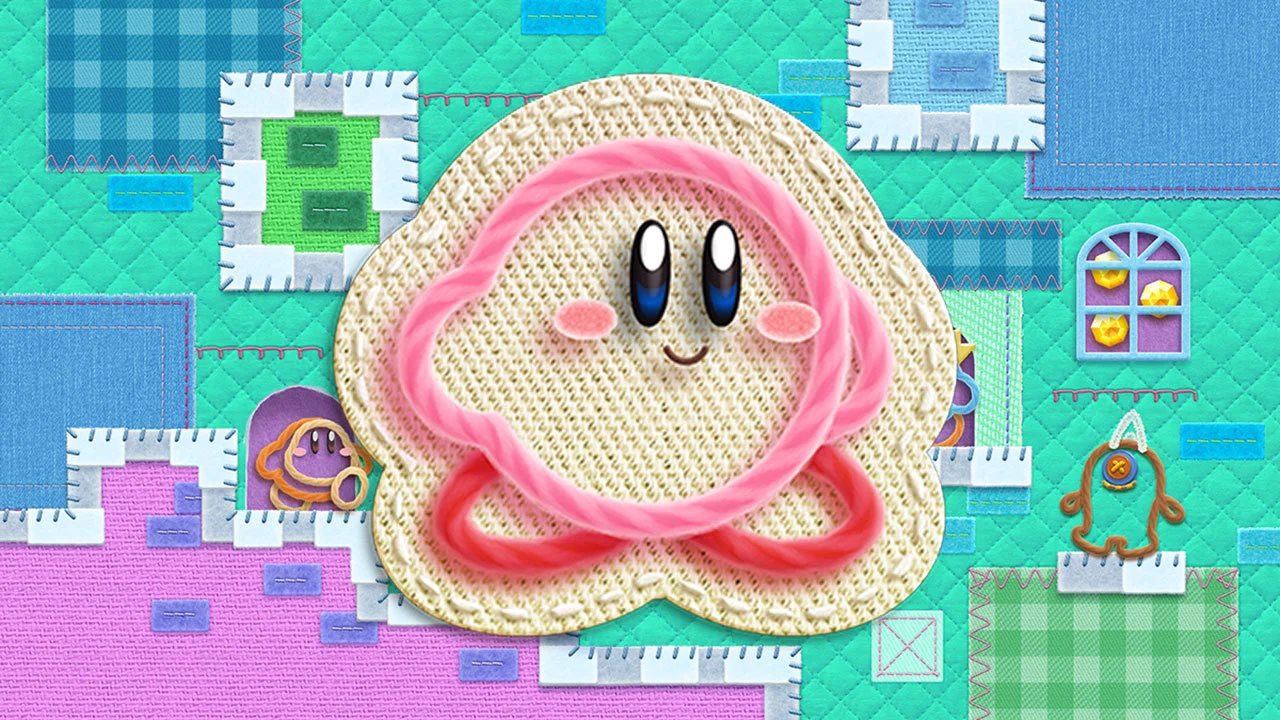 As the 3DS closes out its epic run of amazing games Nintendo has continued to support the device, though a little less enthusiastically than before. While the heyday of the 3DS may be over, with mega-hits now all shifting to the Switch, we’re still left with a few key releases, mostly focused on ports of older titles from other platforms. The Wii is ripe for this, with simple games having found a home on the hugely popular console. And with the success of Yoshi’s Woolly World on the 3DS platform back in 2017, Kirby’s original fabric-styled adventure was a logical next choice. And so here we are, looking at the end of the 3DS with Kirby’s Extra Epic Yarn as one of the system’s final major releases. Is it worthy? Kinda.

As with all Kirby games, this one’s not a plot-heavy affair. Kirby is wandering around Dream Land one day when an evil wizard banishes him to Patch Land, a world made up entirely of fabric. Kirby is transformed as well, including his powers. No longer able to copy the abilities of enemies, instead Kirby can shift form into various vehicles and other devices. Using this and his yarn whip he’ll journey through Patch Land as he attempts to put it back together after the Big Bad split it into various parts.

Kirby’s Extra Epic Yarn, as the name implies, is a boosted port of the Wii title Kirby’s Epic Yarn. While Yoshi has recently taken over the fabric-based art style, this was the original and was quite impressive when it released. Launching on the Wii in 2010, you’d think the game would feel outdated to a degree. Thankfully you’d be wrong. Nintendo’s classic platformer style of course fits perfectly on the 3DS, and this was already an enjoyable adventure from start to finish. On the Wii though there were some serious issues, with the incredibly easy difficulty standing out as the biggest. 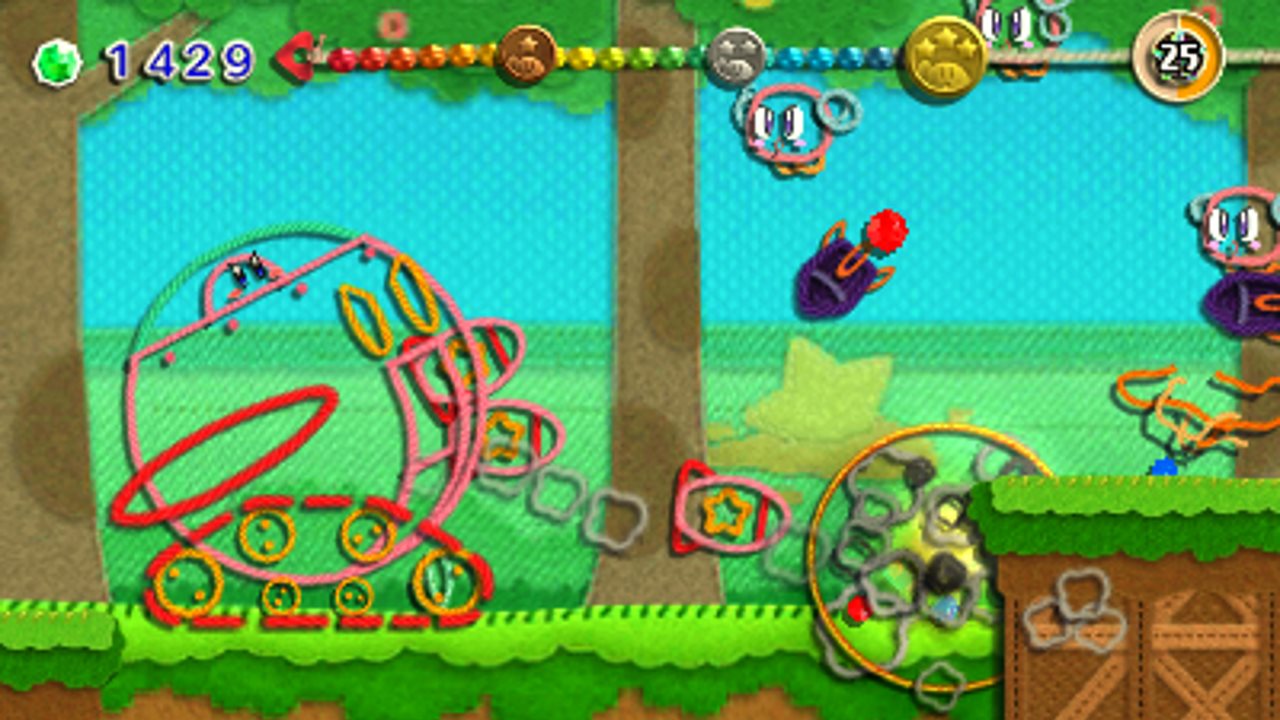 With the shift to the 3DS this and many other problems have been wiped away though, thanks to the introduction of a new Devilish Mode that will keep seasoned gamers on their toes throughout. This new mode really does improve the experience for those who played the original or just want an extra challenge. It doesn’t elevate the game to some lofty challenge of any sort, but it keeps things fresh and frantic as you run through the gorgeously crafted levels collecting hundreds and hundreds of bits which can buy items to decorate Kirby’s room.

Kirby’s Epic Yarn was a great platforming adventure back in 2010 and it has aged particularly well.

What somewhat holds back Devilish Mode is the other major addition to the campaign: special abilities. While Kirby cannot steal abilities and morph into other forms as normal in Kirby’s Extra Epic Yarn, this 3DS version adds something that’s almost as good. Special abilities can be found throughout the world, giving similar maneuvers such as a sword. These are neat and help the game feel more like a standard Kirby adventure, but they make what was an already easy game easier, even offering new solutions to previously puzzling platforming sections.

Along with Devilish Mode come two extra additions to the original Kirby’s Epic Yarn experience. Minigames starring King Dedede and Metaknight have been added, and while they aren’t robust chunks of gameplay, they are nice little add-ons. Basically playing as endless runner style games, Dedede runs across the screen, hitting or diving through whatever comes into his path. Metaknight has more agency, allowing the player to freely explore the screen, hacking and slashing at everything, as it automatically scrolls across the stage. With just four stages apiece these are only momentary diversions, but for those who played the original or find themselves finished with the campaign, they offer something nice.

This is all of the Extra in Kirby’s Extra Epic Yarn and if that were all that the game altered it would have a much better case for being the definitive version of the game. Unfortunately coop was lost in the shift from Wii to 3DS, and that’s a hard hit to this game. Having another player tag along as Prince Fluff was a great part of the original experience and its absence is felt here. With how young the current 3DS audience is, it feels like being able to share the game and get some help would have been a key feature for many players. 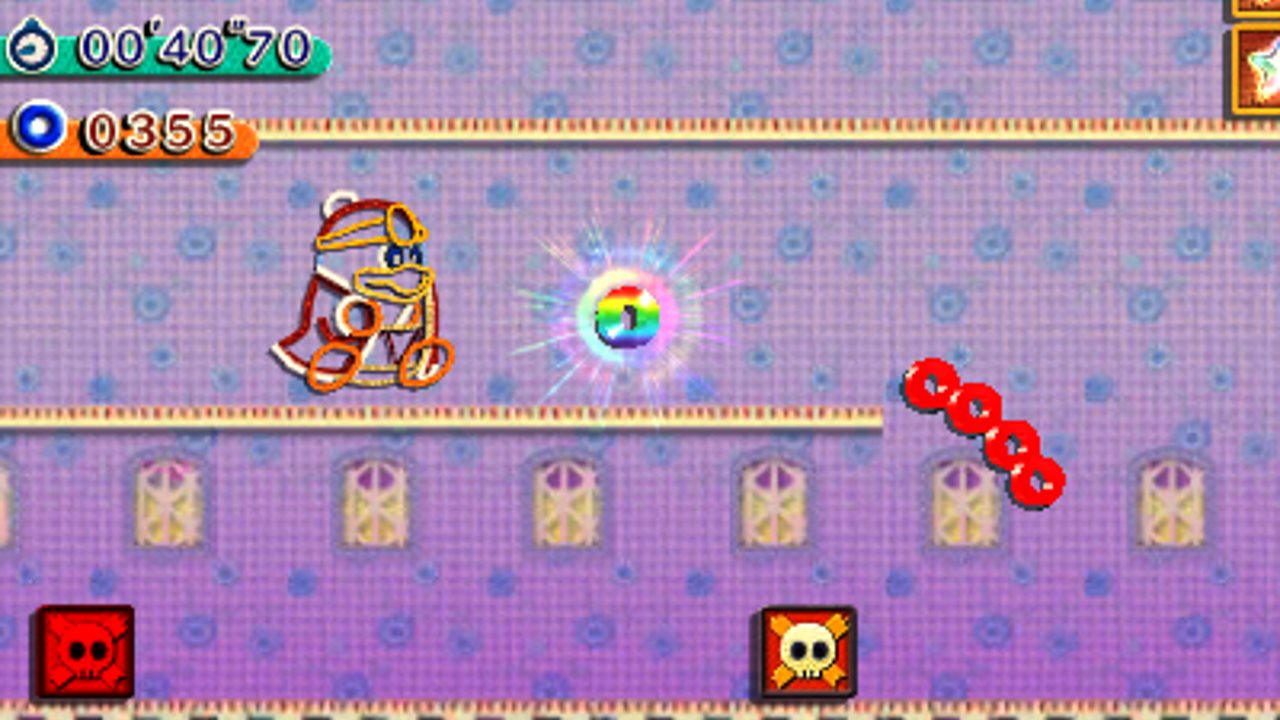 Also coming up in the absence column is 3D visuals. Sure, the 3DS mostly abandoned these long ago and isn’t even offering the feature in most current versions of the system. Still, with how Kirby’s Extra Epic Yarn lays out its levels it felt like 3D would add a lot to it. Seeing Kirby on screen represented as nothing but a few pieces of string would have been great, and the depth of the levels could have been used to the game’s advantage.

Beyond this, the game is mostly intact and whole with its shift across platforms. Kirby’s Epic Yarn was a great platforming adventure back in 2010 and it has aged particularly well. The visuals are still rather stunning in fact, even on the 3DS’s paltry screen. The music is of exceptional quality as well and worth listening to outside of the gameplay experience. While this might not be the blockbuster release to cap off the 3DS’s incredible life, it’s a nice addition to its library and worth picking up if you still keep it charged up.

While Kirby’s Extra Epic Yarn lives up to its name in delivering the original experience with something more, it doesn’t truly stand out as the biggest and best version of Kirby’s fabric-styled adventure. The lack of coop feels troubling, but everything else about the game is great. This was already a fantastic platformer, with its only flaw being the inability to die or face real consequences. That has been rectified with Devilish Mode, and a few other add-ons make for a nice little package for those who still want some 3DS platforming action.