The latest news in the world of video games at Attack of the Fanboy
June 6th, 2016 by William Schwartz 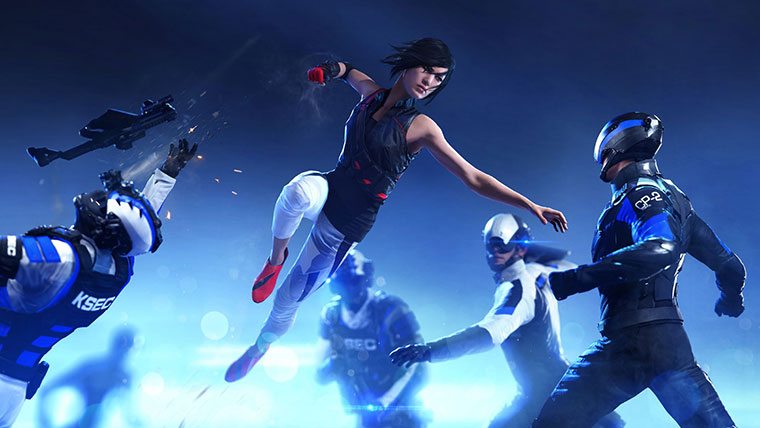 The original Mirror’s Edge was one of my very favorite games of the last generation.  It was a different type of game in a time where multiplayer shooters and music/rhythm games ruled the roost.  Set in a dystopian universe Mirror’s Edge was best classified as a first-person, three dimensional platformer that gave the player complete control over Faith, a runner who used parkour abilities to traverse the world.  It was incredibly stylish for the time.  Sterile environments with glaring red signposts to lead you through what was a short and linear game.  There was a pretty strong following for it, and I believe those who got the most out of the original were the ones who really latched on to time trials side of the product, which pushed you to focus on speed in getting through the levels.  Mirror’s Edge felt like a budget title, probably a passion project for DICE, where very little development money was spent on things like cut scenes, voice acting, and the likes.

For years there was a very vocal segment of the gaming community that called for a follow-up from DICE.  In 2013, EA announced Mirror’s Edge: Catalyst.  While I’ve been incredibly positive on what I’d seen leading up to my review of the game, having finished it, I don’t feel the same way.  Stacking the original and Catalyst side by side, Catalyst is superior in every way.  It’s got more to do — a huge open world to explore, online functionality, a longer campaign, but what it doesn’t have is the soul of the original Mirror’s Edge.  Catalyst feels like a product that’s trying too hard to catch lightning in a bottle on this second time around.  The gameplay got weaker, diluted by the sheer amount of itself.  The story, while more thorough and expansive than the original feels downright disrespectful in a Halo 2 sort of way.  Some things just didn’t get better at all.  Combat for instance, is still the weakest part of the game, yet is thrust on you constantly during the critical path of the story.  It is, however, still a beautiful game… most of the time, when glaring technical issues aren’t popping up intermittently.

The biggest change here is in the open world nature of Mirror’s Edge: Catalyst.  The gameplay is still very much centered around the parkour system that the original had, it’s just also got a lot of the meaningless travel and obligatory clutter that contemporary open world games contain.  This Mirror’s Edge still points you in the right direction with red markings, but is even more hand-holding than the original with an optional runner’s vision that you can literally follow for about 90% of the main story line.  With so much running, and so much backtracking over familiar territory it can get a little stale. So stale in fact that there’s a fast-travel option in a game where movement is supposed to be the key gameplay pillar.  As a fan of the original, I found the fun in level MASTERY — finding ways to shave seconds off of completion times, not doing the same thing over and over per say.  Catalyst is still somewhat of a platformer, but it very rarely allows you to think for yourself on the default settings.  If you’re more of a puzzle solver and would like to get a little more out of the game, you’d do well to head into the settings to turn off Runner Vision.  When you do though, you run into another issue, which many complained about in the original when it comes to the trial and error nature of the game.  Catalyst is damned if you do and damned if you don’t, it’s easy to see why they defaulted to a game that essentially has a racing line.

Faith is also living in a hostile world as a ‘runner’ and that means there’s a good amount of combat in Mirror’s Edge: Catalyst.  It wasn’t the highlight of the last game, and it’s most certainly not the highlight of this game.  While some changes have been made to make it more palatable I suppose, it still feels like it gets in the way most of the time, especially so in the mandatory ‘clear this giant group of enemies out before proceeding’ stages.  So what’s so bad about it?  It’s not bad when it fits well with the movement and flow of the game.  It’s when you have to stop moving, get confined into a small space, and battle it out with multiple enemies that it starts to get a little dicey.  The good news is, much of the combat of Mirror’s Edge: Catalyst is skippable.  You can just run past it if you want to.  It’s only when you’re forced into it that you see it for what it is, and it’s a really weak aspect of the game.  On that note, some of the timing for these unskippable battles to the death and when they are used in the story were chosen poorly in my opinion. 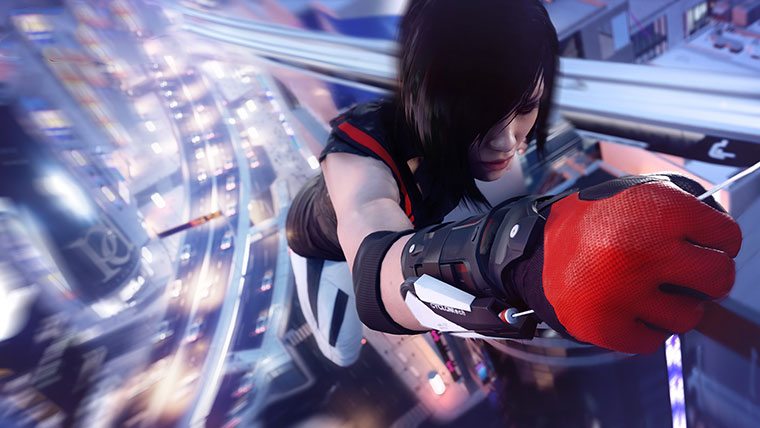 Mirror’s Edge fans will also find a completely new upgrade system for the game.  I mean, it is an open world game, right?  It’s got to have an upgrade system of some sort.  Otherwise what would you be doing all these side missions for… finding all these collectibles and such?  Faith can be customized in a few different areas —  Movement, Combat, and Gear.  Movement is pretty much the same as the original game, but there are some new moves that expand on and/or tweak what moves you start out with.  While Combat is certainly easy to gloss over as much of the combat in the game is skippable, it’s important to spend some points in this area to give Faith more powerful attacks and abilities while fighting enemies.  Without some upgrades, more powerful enemies in the latter stages of the game can be much harder to deal with and downright frustrating.  Gear was actually the most surprising unlockable grouping as it’s also the spot where some of Faith’s new abilities are showcased in the “MAGrope” and “Disruptor” items.  The former is a rope that allows Faith to swing through chasms, pull down debris, or pulley herself to high spaces.  The Disruptor, however, is a powerful combat tool which can stun enemies, drones, and turrets and is incredibly helpful in combat sequences.  While those two new additions are wildly different than anything we saw in the original game.  They don’t necessarily break it.  I’m not unhappy that they were added, especially the rope.  It seems to fit well as far as being able to keep the flow of a run going.

All in all, Mirror’s Edge: Catalyst is a much meatier game than the original.  The game has about twenty main story levels/missions, with a bunch of optional side missions, to run down as well.  If you were looking at putting a run-time on the main story, I did it in around 8-9 hours.  That’s with the Runner’s Vision on.  I could see it taking much longer using the trial and error method.  The open world does add some time to the critical path story missions, running back and forth between Safe House areas can take some time, and as previously mentioned, you’ll be doing some retreading of locales.  Towards the end of the game I found myself fast traveling if I knew I was running through an area that I’d been through before.  There are benefits to not fast travelling.  There are a number of collectibles that go towards the aforementioned leveling process, primarily.  You’ll find Courier Missions, Dashes that put your scores up against other runners online via leaderboards, puzzling Grid Node missions, billboard hacking, as well as just general side missions that add a little more color to some of the people of the world.  As much as I really didn’t enjoy some aspects of the core story missions and overall design of Catalyst, the sheer wealth of things to do and size of the city hold plenty for those that hold an opposing view and are eager to get the very most out of the game.  Very much like most other open world games, Mirror’s Edge: Catalyst hits you over the head with a wealth of tasks to complete — whether they’re enjoyable the nth time around is up for debate.

While the original Mirror’s Edge had some online connectivity with its Time Trial level leaderboards.  Time Trials aren’t just specific levels as they were in the previous game.  This time around players can create their own time trials, and you’ll find them everywhere.  This user-generated content allows you to race against echoes, and compete on leaderboards for each of these you can find across the world.  It’s definitely a nice touch and a welcome addition, but not everybody is very creative when it comes to creating trials.  I’ve found some decent ones, long and short, creative and mundane.  On that note, there’s also an online facet called “Beat L.E.s”  These are other user-generated challenges that challenge players to reach different locations in the city. 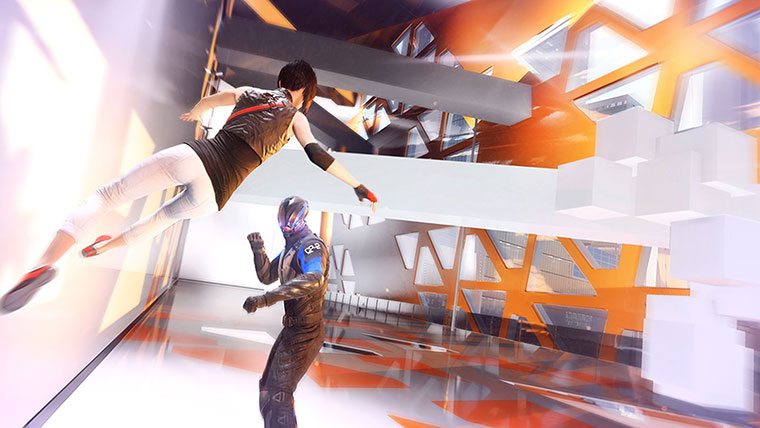 One of the most unfortunate aspects of Mirror’s Edge, at least on the Xbox One, was just how poorly the game performed for us on a technical level.  We experienced glaring pop-in texture issues and geometry anomalies all the time.  So what does this mean?  Constantly flickering, textures visibly being loaded into the game world as you play, and even some weird random geometry just popping into the game world, making it difficult to determine the best way to proceed.  There were times when my character seemingly got stuck in the game world as well, which forced me to restart at a prior checkpoint.  To top it all off, I had a handful of crashes to the Xbox One dashboard while playing this game.  Mirror’s Edge: Catalyst doesn’t feel stable on the Xbox One here at the review embargo.  This very well may change, and all games have some issues, but the ones we encountered here were above and beyond what you’d normally see.  However, said issues didn’t really ruin the game experience, they were just the icing on the cake of a game that felt kinda average in all facets.

While DICE has certainly made a bigger Mirror’s Edge here with Catalyst, I don’t think they’ve improved it any ways that were really necessary.  A checklist of familiar open world game features strip away most of the charm of the original.  The beautiful art design of the game is suffocated by technical issues that were wide ranging and oft-occuring.  Mirror’s Edge: Catalyst rarely, if ever, makes as memorable an impression as its predecessor did.  While it tries incredibly hard to do so, and succeeds in terms of world building and story development, it’s all at the sake of nearly every other facet that players of the original may have held near and dear.