A quarter of an inch the other way will help this series achieve its full potential. 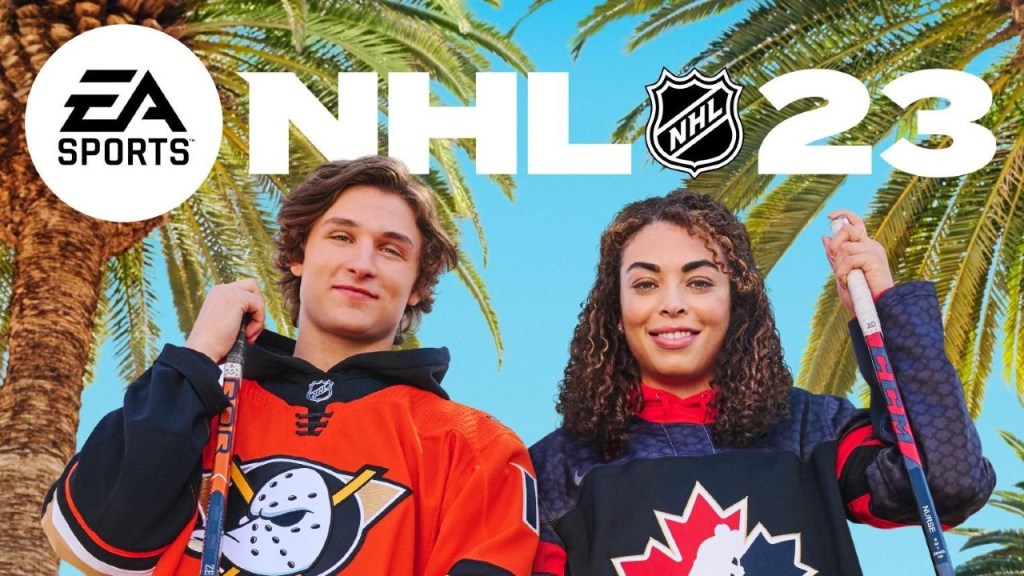 There are 30 seconds on the clock, and the announcers are excitedly calling out the stakes on the line. You’re ahead by one point, and the opposing team has the puck while making an aggressive push toward your goal. Only seconds remain, and the satisfying thwack of a stick brushing across the ice tells you that your opponent has taken the shot that could change the course of your journey to the Stanley Cup.

But, as if fate itself was on your side, you do not hear the sound of the net swooshing from a successful goal. Instead, you hear the sound of the crowd erupt as the puck ricochets off of the goal post with the most amazing sound you’ve ever heard as you are now one step closer to claiming the ultimate goal of your career. Your teammates swarm you in celebration, as you move ahead to the finals and toward the hardest games of your career.

While you’re on the ice, you’ll find that you can feel right at home with NHL 23, but with its growth comes growing pains that are a bit too obvious to sweep under the rug. 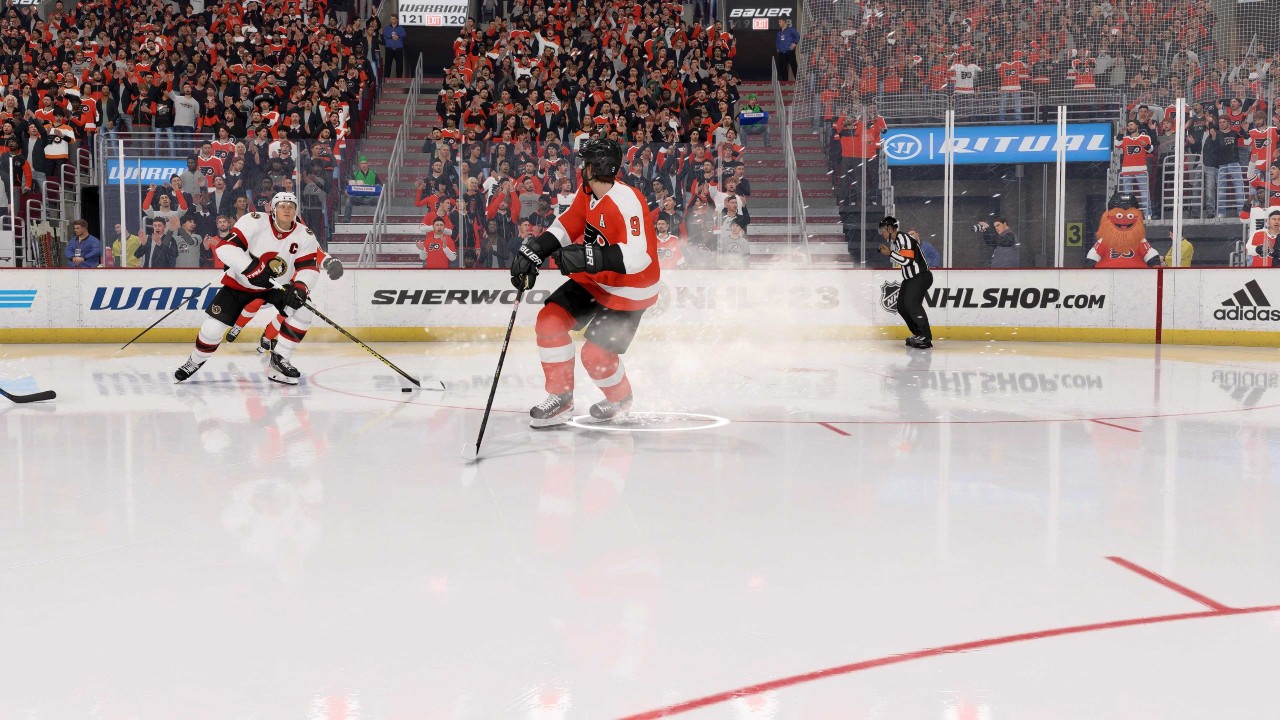 From the moment that you start up NHL 23, things feel electrifying. The new menus that you’ll navigate through showcase new animations, and the plethora of modes available to you mean that you’ll always have something to do. You’ll find it in spades here if you’re looking for arcade action or full-on simulation of your favorite chilled sport.

Visually, NHL 23 is the best that the series has ever looked, as to be expected with the jump to the current-generation hardware. You’ll find that player likenesses are a key focus, as they’re looking almost identical to their real-life counterparts. Arenas that deform and deteriorate alongside your players look great in action, as well.

Starting off a match against a rival team on a freshly cleaned sheet of ice, only to watch it become more disheveled as you fight towards the goal line is an excellent feeling. And while you’re on the ice, your players move and glide along with excellent control and weightiness — nobody moves around like a figure skater here.

It’s a shame to see that celebration animations look as poor as they do when the rest of the game looks and moves as great as it does. Seeing your players approach one another while moving like wooden marionettes is disappointing, especially when the action itself looks smooth. The game can also get quite visually busy, especially if you are playing with the On Ice Trainer mode turned on.

With development beginning to turn more towards the more powerful PlayStation 5 and Xbox Series X|S, the visual jumps between generations are becoming more apparent. But, you can’t feel the true beauty of the game when characters at times move like they’re stuck wearing a suit of cardboard armor.

On the same subject, we can only hope that the crowd animations get an overhaul before its next release. Seeing the crowd moving at half of the framerate of the on-rink action is jarring, especially during close-up shots where it’s more apparent than not. Some players may not even notice it, due to the frantic action happening on the ice, but it was one of the first things that was personally noticed.

Another area that could use a bit of a refresh in the future is the fight option that is given to your player after a rough play. If you’re feeling scrappy, you’ll be able to grab hold of an opponent and lay the smackdown on them, but it feels very stiff and awkward while the action unfolds. Take a few hints from your previous work in the boxing field, and give players something that holds some weight. 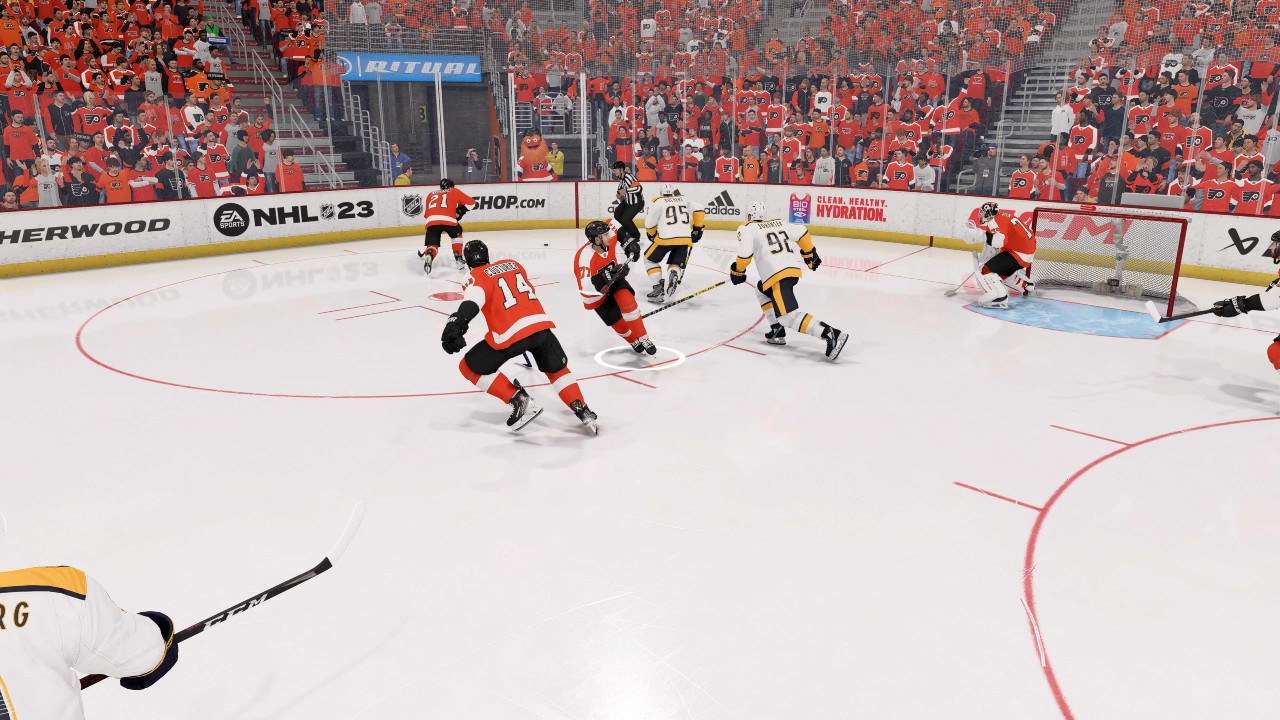 From the second your team hits the ice, you’ll feel the excitement brewing. Thanks in part to the announcers that were chosen for this title, every play feels like a make-it-or-break-it moment. While Madden NFL 23 stepped up its game on the commentary side, it pales in comparison to what NHL 23 brings to the table.

Other sports titles need to take a page from their playbook, as you’ll feel the impact of every moment brought to life by colorful commentary that ramps up in excitement through the match. If you’re not playing well, you’ll be sure to hear it. On the flip side, if you’ve made a slapshot from across the court on a final-second play, the eruption of excitement from the crowd and announcers is felt throughout the room.

The only complaint is a few lines of repeating commentary, where you’ll hear a similar comment about a Goal-Tender being quite conservative or just general little tidbits of information rehashed as the game moves forward. Beyond that simple complaint, the sound design in NHL 23 is something that other games in the genre should strive towards without a second thought.

A body check against the glass has the proper amount of weight behind it, and the sound of your skates gliding across the ice could work for some as a form of ASMR. The reactionary feel of the crowd on certain types of plays gets your blood pumping and your fingers moving as you try to save a sour quarter from becoming your final game in the series, and every second of it is felt along the way.

As you peruse the menus, you’ll also find a solid soundtrack that you could leave running in the background for hours. Full of plenty of songs that will get your blood pumping, EA has jumped the gun when it comes to sound design for this specific title, and they deserve some praise for that aspect. There’s a good chance that you’ll find a new favorite tune or two as you spend your time in this title.

Time To Lace Up For All These Modes 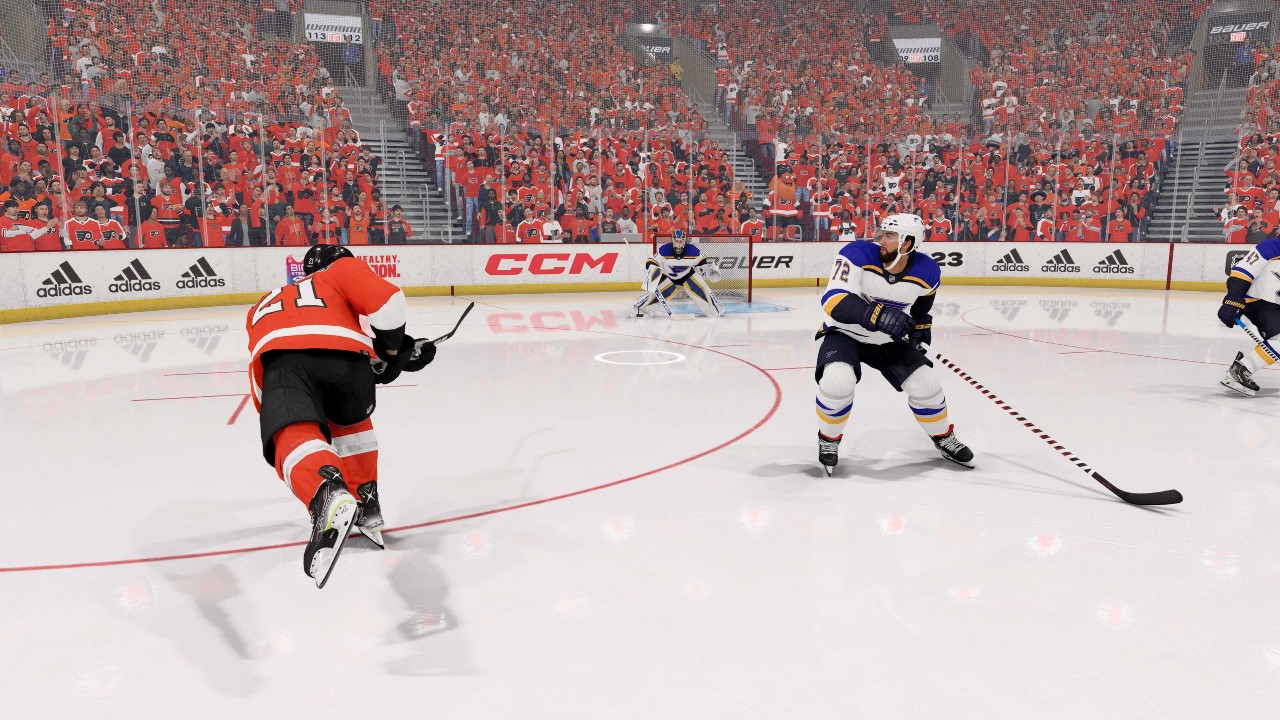 There is more than enough to keep any player happy in the world of NHL 23. The sheer amount of leagues that can be played, and available modes will appeal to gamers far and wide. If you’re looking to get into the series after abandoning it back at NHL ’94 or want to experience the sheer skill of a simulation match, you’re in for a treat.

Bringing the action to your friends in a game of Threes, or wanting to show off your skills in Ones, you’ll be able to fine-tune your skills and your settings to make the preferred method of play that much more enticing. The number of ways to play makes the options almost endless, no matter if you’re looking to use the Shot Stick to pull off some killer deke skills, or settle with the simple shot and pass option.

Beyond your standard online and offline options, you’ll also have a chance to work your way toward the Stanley Cup in a customizable tournament mode where you’ll need to either simulate or play your way toward the ultimate championship. You’ll also have the option to get involved in the HUT mode, where you’ll be able to build your team from scratch by purchasing player cards with real-world money.

Some players may be turned off by the premise of spending money to build their ultimate team, but this isn’t a mandatory mode by any means. You’ll be able to edit your Rosters at any time to give your favorite team the best players around if you’re looking to do that. You’ll also be able to dig your skates into the Franchise Mode, which has seen similar improvements over previous years.

This is another strength that the game has going for it because there is something for everyone to enjoy. If you haven’t played a hockey game before, or you’ve been playing the NHL series since its inception, you’ll be able to introduce a new player quickly and easily or turn up the heat to your own specifications.

You’ll also be able to take your own created player through the wringer and work towards becoming the greatest of all time, but there are a few things here that could use some polish in the future. It seems to rely heavily on previously available customization options while not bringing much new to the table, which is a bit disappointing for those that have been investing in this franchise for the long haul.

On the opposite side of the spectrum, being able to create your own team that you can take throughout the league is quite exciting. With a large number of customization options available here, even if some may be rehashed from previous entries, you’ll be able to make your dream team in the game without an issue. Is it time for the Mighty Ducks to make a comeback? It’s all up to you!

As gamers begin to flock toward the newest generation of consoles, there are a few years where sports titles in particular suffer the most. Trying to keep your fanbase happy while simultaneously developing a title between two different generations of consoles can’t be easy for anyone to handle. While other titles have started making larger leaps and bounds, NHL 23 seems to be stuck in limbo.

While there are some general improvements over previous entries in the franchise and the pains of the past few years are slowly starting to disappear, there is still some room to grow when it comes to this particular sport in general. While Madden and FIFA may be the bigger names in the group, NHL 23 does a valiant job of standing on its own two feet.

If you’re looking for something that makes you feel closer to the ice than ever before, NHL 23 is going to be your favorite game that you play this year. The electricity that oozes from this title is something that will bring me back to playing it over and over again, even if there are a few nagging problems that need to be addressed very shortly.