The latest news in the world of video games at Attack of the Fanboy
August 14th, 2017 by Matthew Jaques 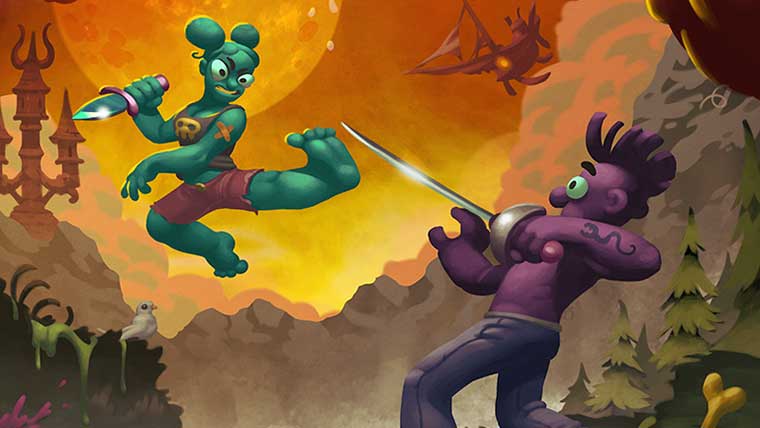 Nidhogg 2 is the second title from the tiny indie studio Messhof, and it delivers a gruesome and colourful update to the original Nidhogg formula.  The game has the same simple premise as its predecessor – two players spawn facing each other armed with swords. The first player to kill the other has to rush towards the opposite end of the screen to advance to the next play area, referred to as ’screens’. The first to slaughter their opponent and progress through all three of their opponent’s screens wins the match, and is promptly eaten by a giant floating worm and declared the winner.

As simplistic as this sounds, there is a complex set of fighting styles and mechanics in Nidhogg 2. Every melee weapon has three stances you can use to get around the guard of an opponent. These stances are, high, mid, and low. Putting your hairless, screaming character in the respective stance to your opponent will allow you to block their attacks, but a quick switch to a different stance will allow you to launch a fatal blow to your opponent. If in doubt, you can also flat out throw your weapon at them, which can be dodged by parrying the attack, or by jumping over the hurling weapon. If you drop your sword, you’ll have to kick your enemy’s weapon out of their hands and stomp on their head until it explodes, which is extremely satisfying with the cartoonish sound effect and the barrage of organs that fly across the screen upon death. 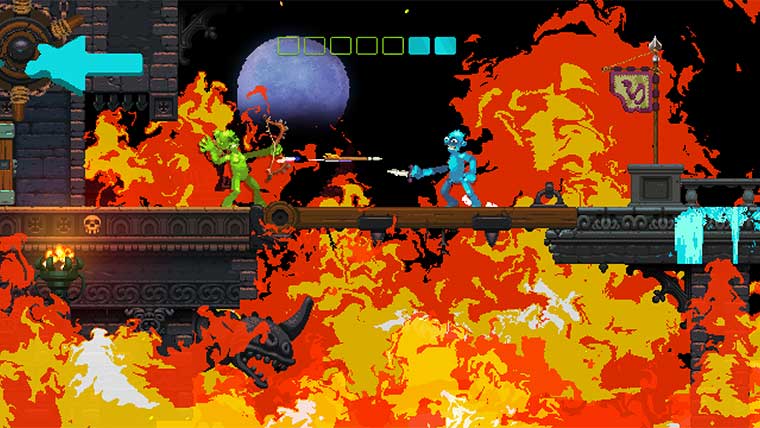 “The different weapons really give Nidhogg 2 some refreshing variety over its predecessor.”

Every time you respawn (which will be often), you’ll be given a different weapon – a sword, a great sword, a dagger, or a bow. This is a new aspect to Nidhogg 2 and adds a new layer of strategy to murdering your foe. The game randomly selects what weapon you’ll be handed milliseconds before having to use it on an opponent rushing towards you. Often, you’ll find yourself drawing the bow and getting skewered by a great sword, and other times you’ll be facing an opponent coming towards you with bare hands, running straight into your dagger . The different weapons really give Nidhogg some refreshing variety over its predecessor.

Whilst Nidhogg 2 hasn’t got the visual sheen of the latest AAA games, the retro art design is quirky in all the right ways – from fighting inside the gullet of a monster (all the way from top to bottom) to parrying across sunny beaches filled with psychedelic rainbows twirling overhead, it is a visual delight. There’s always some little assets swinging around or giving off ambient light amongst the grotesque and beautiful backdrops the game offers. The whole style works cohesively across the many varied screens, each with a different style that’s a joy to take in, during the brief moments in which you sit idly awaiting respawn. 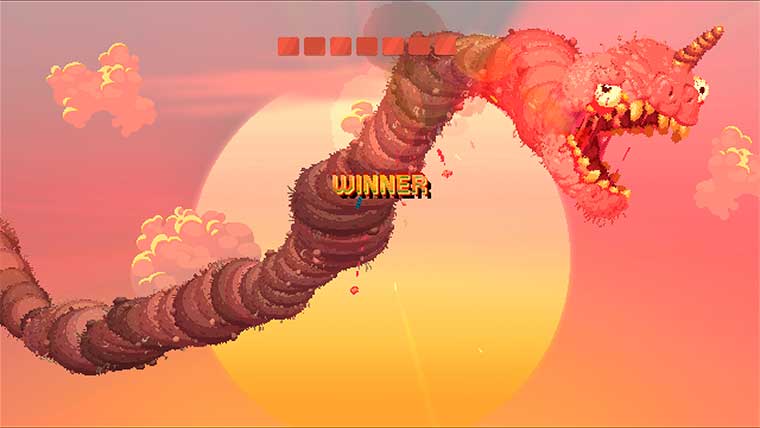 The weird and wonderful levels also throw up interesting gameplay elements, such as icebergs that sink when stood on, leaving otherwise well-timed bow shots streaking overhead, as you get a run-up to jump onto the other player’s iceberg and run them through with your sword. You’ll find yourself falling off of cliffs and into meat grinders if you decide to launch an attack at the wrong moment, leaving your foe to run straight past your mangled corpse and onto the next screen. There’s also the element of hiding the player’s character in tall grass and behind other game scenery, an idea that worked well in the original Nidhogg, leaving you to guess what stance your opponent is in and hoping they don’t find your weak spot first.

The first game’s composer, Daedelus, is back with a thumping electronic soundtrack and as with the first game, it procedurally increases in intensity in relation to the action on-screen. This combined with the comical sound effects that the characters utter when fighting gives off a comical, yet intense audio experience that matches the gameplay perfectly.

The only thing that lets down Nidhogg 2 in any way is the fact that whilst it does have some diverse maps, it only has 10 maps. There’s plenty of fun to be had with Nidhogg 2, and its gameplay is sure to deliver longevity, but you will be playing the same 10 maps for as long as the game is around, unless the devs at Messhof decide to release DLC. 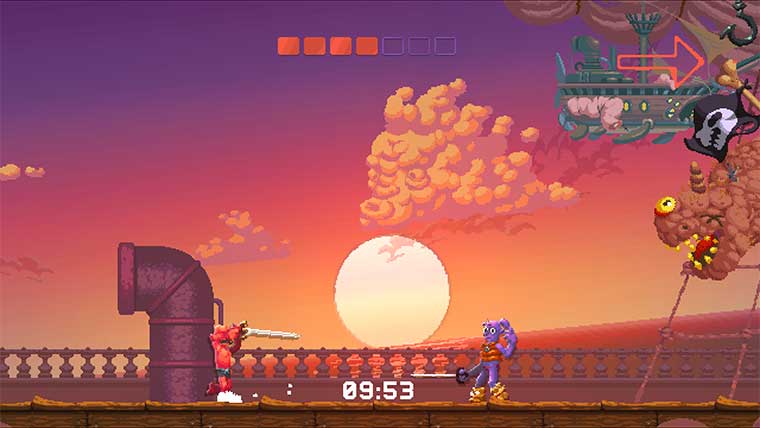 Whilst there is a decent single player arcade mode in Nidhogg 2, where you fight through all of the game’s maps using a set weapon for each stage, the real fun is to be had in the local and online PvP. It’s a truly addictive experience to sit down with a friend and go head to head in a test of reaction speed and button mashing. Nidhogg 2’s unique blend of fencing, archery, and melee aren’t on offer elsewhere.  You can expect shouts, cheers, and accusations of cheating to fly back and forth between competitors as the fast-paced combat delivers ups and downs that exceed the highs and lows of bigger budget fighting games.

Truly, it is a unique and incredibly intricate game that succeeds in sucking you into its addictive nature, whether you are a newcomer to the series or a veteran looking for a fresh challenge. This is an essential title for anyone who has fond memories of local co-op with friends before the days of broadband, and also a great online experience you can play for half an hour, or quite easily until 4 am.