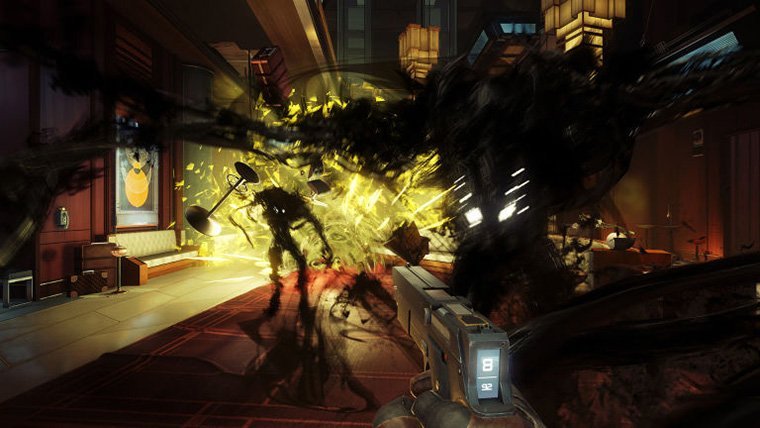 The Prey series has been through many changes over the last decade.  Originally released in 2006, and then slated for a sequel in 2011 before getting canned by Bethesda it’s seen multiple teams of developers attached to the name, when finally it was revealed last year at E3 that Arkane Studios would be taking the reigns to completely re-imagine the IP.  Arkane had proven themselves in 2012 with Dishonored and then again last year with a follow-up in the sequel, Dishonored 2.  What they had shown to their fans is that they make great first person action games.  Prey lives up to the pedigree, offering a beautiful visual and audio presentation, but deviates from the other parts of that successful Dishonored formula in a number of ways.

Prey looks like Dishonored.  The art is definitely Arkane, but almost everything else feels wholly new and unique.  From the gameplay to the weaving, mysterous storyline and setting, Prey feels more ambitious than Dishonored in a lot of ways.  Its story certainly is.  The save the princess storyline of Dishonored was overshadowed by incredible play how you want gameplay, but this time around Arkane flexes more of its story-telling and mood-building chops.  There’s a lot to explain here, but Prey takes place in an alternate history where the Space Race of the 60’s leads to more technological advances.  Flash forward to the 2030’s and Morgan Yu, your playable character, is aboard a giant spaceship known as the Talos 1.  The Talos 1 is infested by aliens known as Typhon, and the story dips and dives around the ultimate goal of trying to wipe out this alien race. 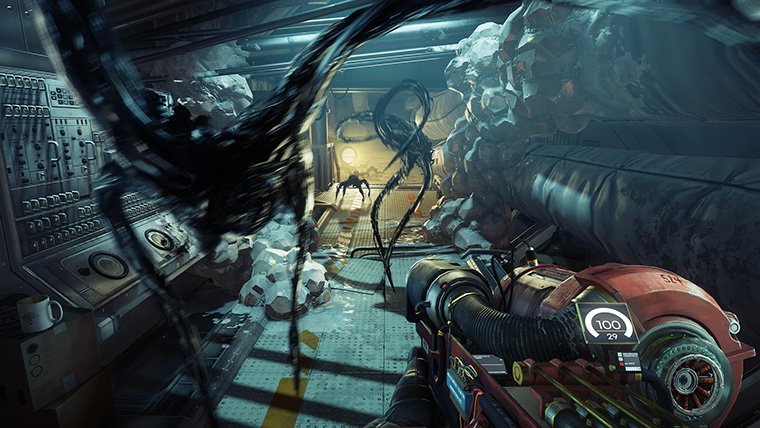 While it’s easiest to compare Prey to Dishonored because of some of how the game feels and looks, I think a more apt comparison is to that of the original Bioshock or a less “Disney” Bioshock:Infinite.  There are a lot of parallels between Bioshock, the story telling and gameplay mechanics, and Prey.  This is a lofty comparison to make, but Prey is right up there and in many ways superior in terms of story telling, mood building, side and main quests to complete and the robust set of customization options that the game features.  The only thing I wish Prey had, was a little bit more variety when it comes to enemy types found throughout the game.  Everything else is impeccable.

Prey is a shooter.  It’s an action-adventure shooter, but it’s a shooter.  You’ve got a melee weapon and some abilities that can be used, but for the most part, you’re shooting things.  Not a shooter like Call of Duty, Wolfenstein, Battlefield, or others like them, but something that takes a little more finesse.  A weapon wheel allows you to switch between weapons quickly and your most trusty one is a Gloo Cannon that shoots a foam-like substance and can be used for many things.  For one, it can incapacitate enemies for a short period of time, allowing you to switch to another more powerful weapon to finish them off.  You can form climbable surfaces with the gun, and you can even kill some enemies with it.  When you do switch off, you can switch to things like a silenced pistol, a shotgun, the massive laser called the Q-Beam, or you can move in for a melee attack with your trusty wrench.  There’s also a bunch of additional secondary items that can help in combat like emp grenades and the like.  The combat feels great in Prey, but there’s an incredible learning curve associated with the game and you’ll die a lot in this learning process.   Where so many games give you a large arsenal of weapons, none that ever really need to be used, Arkane makes sure each of the weapons in Prey has its place, and you’ll need to be a master of all to progress through the game. 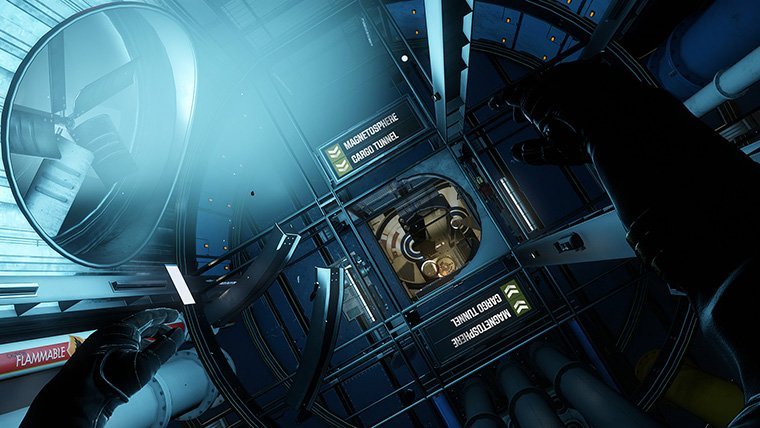 Part of that learning process comes from some of the gear you’ll encounter.  A helmet called the Psychoscope will be found after a few hours of play that allows you to scan your surroundings for Typhon enemies, learn their weaknesses, and then earn upgrades for doing so.  Prior to finding the Psychoscope you’ll constantly be caught off guard by small mimic creatures, that blend in with the environment and surprise you out of nowhere.   It can make the early goings of the game somewhat difficult, but it also ratchets up the tension as well.  Prey can very well be described as a thriller title, it’s definitely not horror, it’s somewhere in between.  You constantly feel underpowered, undershielded, scavenging and clawing your way to your next objectives.

Along your journey you’ll have a ton of side-quests to complete.  Prey is a fairly long game if you want to see and do everything there is.  You almost have to explore as much as possible as resources and upgrades feel very necessary for progression.  In some ways Prey feels like an RPG as you’ll run into situations where you feel over-matched if you haven’t upgraded your character or weapons and taken advantage of the many items to uncover in each part of the ship.  The aformentioned upgrade system in Prey is multi-faceted.  You can upgrade Chipsets for both your Scope and your Suit.  These provide different benefits depending on the chip, but they’re specific to each piece of equipment.  For example, a Suit Enhancement you can find will allow you to have higher resistance to radiation, fire damage, or regenerate stamina.  While Scope Chips are wide-ranging they’re geared more towards detection.  Each of these also has unlockable slots where you can equip more and more chips if you upgrade your character’s abilities tree to do so. 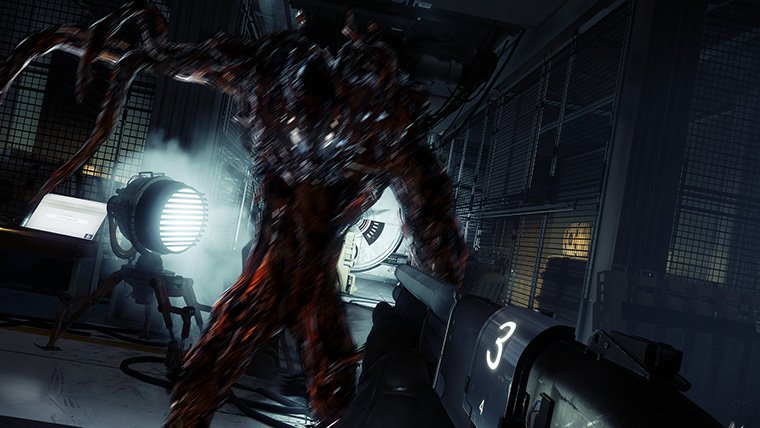 Now the abilities tree is where things really get dynamic as the mixure between Chipsets and Abilities has an obscene amount of possibilities.  It’s really all about how you want to play.   You’ll start out with a standard human abilities tree, which allows you to throw points into three categories:  Scientist, Engineer, and Security.  There are a bevy of unlockables here, and I can’t list them all.  But they do give you the ability to do things like hack computers, customize and upgrade weapons, buff your health, and other upgrades.  Part way through the game you can also unlock Typhon Abilities as well.  These allow you to harness some of the powers of the aliens and use them against them.  You can use energy blasts, you can change shapes, or use the power of your mind.  If it sounds like a lot, it’s because it is.  It seems nearly impossible to max out this skill tree.  For fans of customization and choice, Prey does not disappoint.  Weapons on the other hand are far less customizable, but they do have upgrade paths of their own.  However, they stay relatively the same in their functionality throughout the game.

But back to progression.  Prey isn’t entirely linear.  While your core objectives are linear, there are so many things to do and see along the way. There’s a ton of story tucked away in Prey, and while it’s told mostly through audio logs, emails, and other items that you’ll find, paying attention to this stuff really builds out the life that was on this ship at some point.  And you’ll want to pay attention, simply logging into a computer and reading an email can send you on an unexpected side mission and the game feels organic because of it.  Moreover, Arkane doesn’t do much handholding in telling you that you may be missing a very key item, cool side-quest, or that you should focus on this or that part of your upgrade tree at certain points in the game.  It’s all wide-open for the player to determine.  Prey is a learning experience, and once you do learn you can always backtrack to go places that you couldn’t access before.  There are definitely some elements of the game that feel like Metroid-vania, even if they aren’t completely necessary for progression.

Being over-matched, Prey can feel downright nasty on even the normal difficulty until you get a handle on the enemy types and the capabilities of your weapons.  With so many battles needing you to switch between weapons and items during a fight, it can take a little getting used to.  Luckily, you can pause the action and do things like use health kits or items.  You can also use a time slowing mechanic to help turn the tide of battle.  Like Dishonored though, Prey definitely has a stealth element to it as well.  If you alert enemies they’ll come after you hard and fast, but sometimes sneaking is the best policy, especially when entering a new area that might have new enemies to scan.  Speaking of new areas,  Prey definitely has a good variety to it as it pushes you through the campaign.  There are zero gravity sequences inside and outside of the ship, there are different art-styles for the different zones of the ship you’ll be visiting, overall there’s just a nice feeling of exploring new places eventhough you don’t leave the Talos 1.

Like Dishonored, Arkane once again brings all these elements together to form a really incredible all around package.  The fantastic visuals and audio stand out for sure at first glance, but the depth of the gameplay, the customization options, and breadth of the campaign come together in a really incredible way for a cohesive experience.  Barring a crash of the game on the Xbox One, which is unusual to say the least, I didn’t have many complaints about this game at all.  It’s not perfect, but as far as action adventure in the first person, there aren’t many doing it quite as good.

As far as first person action games go, Arkane Studios is probably the best in the business.  Proving that the studio has no shortage of interesting ideas, Prey is the perfect blend of thrilling action and thought provoking story.  Who needs a new Bioshock or Half Life game when we’re getting experiences like these?