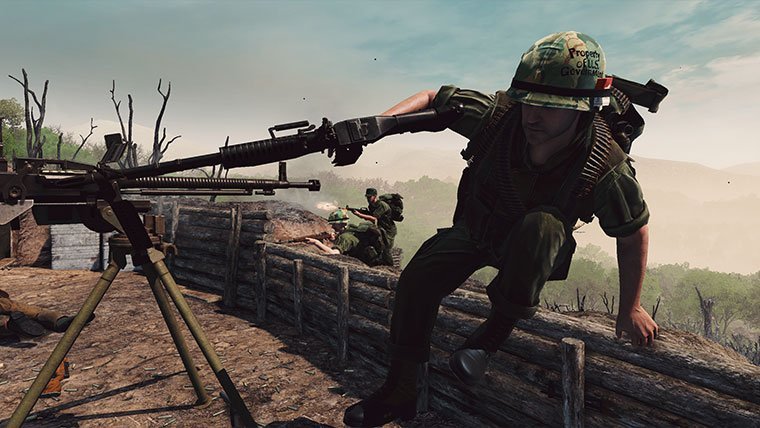 When it comes to shooters there’s a wide space somewhere between the likes of Battlefield and ARMA.  Antimatter Games’ Rising Storm 2: Vietnam occupies this space in terms of gameplay, offering players a more realistic experience while not going overboard as to lose all its fun factor.  This squad-based multiplayer shooter relies heavily on the need for cooperation and teamwork across its core gameplay modes.  While it might not have the fit and finish of a AAA release like Battlefield, the trade-off is in the depth that the game has — offering players numerous gamemodes, and character classes to master alongside that all-important feeling of working together.

Rising Storm 2: Vietnam pits the United States Military forces against the Vietnamese resistance.  You’ll play as the Unites States Army & Marines, as well as the NVA and Viet Cong across the game’s core multiplayer modes.  There are only three modes in Rising Storm 2, but they all hit the mark.  Antimatter carries over Red Orchestra’s territory control mode, introduces a smaller scale skirmish mode, but the real show-stopper is the large scale combat found in Supremacy.  Each mode can be played on numerous maps, which span a nice variety of locales.  War will be waged across a number of Vietnamese locations including city streets, hills, rice fields, plantations, and of course, plenty of dense jungles. 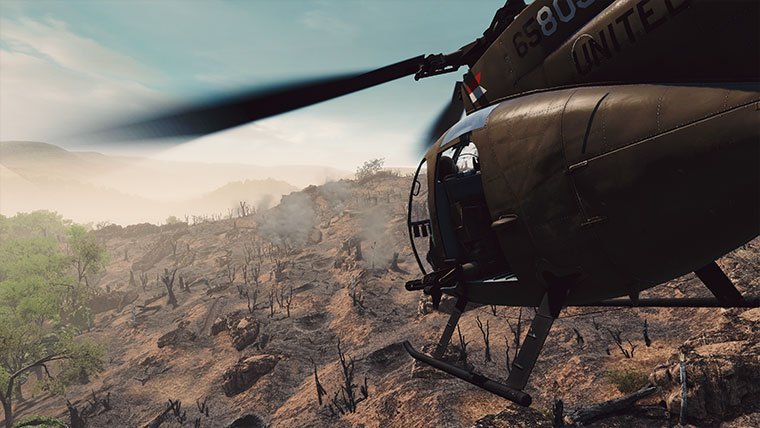 Being a shooter with the bloodlines of the Red Orchestra series, those who’ve played those games should kind of know what to expect.  There’s an authenticity to the guns and shooting in Rising Storm 2 that has clearly been paid a lot of attention to.  There are over thirty weapons to choose from across both sides, which are all authentic to the period and feature a wide variety of functionality that includes things like attachable bayonets, multiple-firing modes, adjustable stocks, and handling that feels more realistic than most games.  In these aspects, Rising Storm 2 feels fantastic.  It’s got great authentic environments to play in with era specific weaponary.

If you’re coming from a shooter that’s more player friendly, Rising Storm 2 does have a bit of a learning curve to it.  In fact, the game can be a little bit overwhelming when you hop into a match for the first time as you’ll likely encounter players that are actually talking with one another, communicating to complete objectives.  That in itself is a breath of fresh air, but it’s necessary because of the many nuanced character classes that play a role in the game.  If there’s a role you like to play, you’ll find it in Rising Storm 2.  Some are more important than others and will place a hefty amount of responsibility on your shoulders should you choose to take a leadership position.  These classes do differ across the attacking and defending forces but there is some overlap. 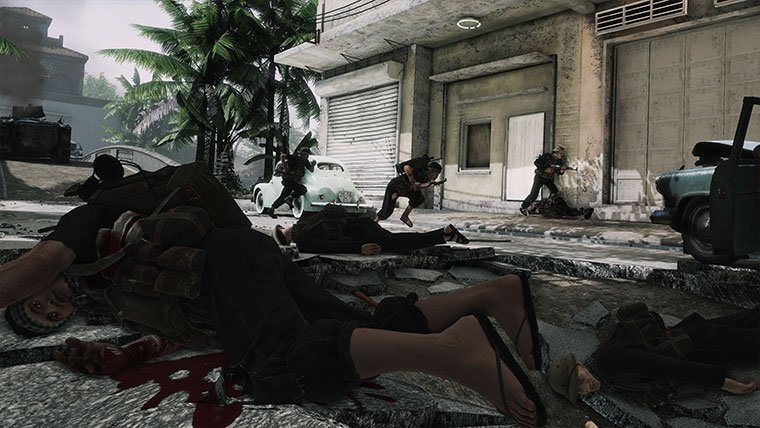 The most basic of classes is the Rifleman or standard grunt.  A good starter class for those new to the game, the grunt’s job is to essentially work alongside other grunts on the frontlines… invading or defending objectives.  Where it starts to get a little bit more specific is in the Marksmen and Machine Gunner classes.  While both are exactly what they sound like, these classes have powerful abilities when used well by the player can really help out an offensive push or a defensive stand.  Unlike games where anyone can choose any class they want Rising Storm 2: Vietnam only allows a couple of each of these more specialized classes.  What you won’t find is a team full of snipers or a team full of gunners.  There are a handful of other classes and roles that are only available to each side.

So that doesn’t necessarily make Rising Storm 2 stand out on its own, but the way that it comes together makes it feel more like an actual team effort.  All teams have leaders, and there are leader classes in the game as well.  One person from each side can choose to be the Commander, and they can call in powerful support items throughout a match.  The kicker, and it kind of exemplifies what Rising Storm 2 is, is that this Commander needs a Coms player to work with him so he can use the radio that this class has to call in these perks.  So you’ve got to have not only the ability to strategically call in tactical strikes against your enemy, but you’ll need a willing player to run the Radioman class to actually get anything done.  If one link breaks in the chain the whole team suffers. 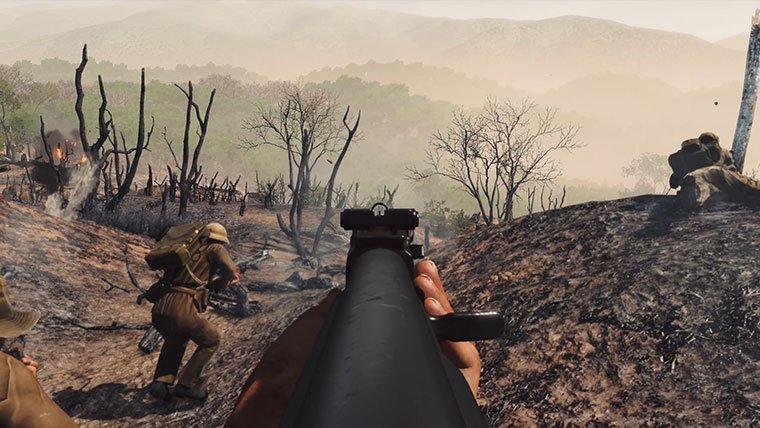 Surprisingly, this class based gameplay feels great in all of Rising Storm 2’s modes.  Whether you’re playing the more intimate offerings or having a big Supremacy battle, it all feels great from a gameplay perspective.  No matter what role you’re playing, you feel like you’re part of a team.  At least that’s how I felt when playing the game for review.  Not everyone is talking in the game, but there’s just enough chatter to get your objectives completed.  The community feels really tight in this game, and pretty welcoming assuming you do your job.  Those jobs vary depending on the game mode. Skirmish is pretty straight forward and the leader classes aren’t used as the maps and player counts are smaller.  The Territories mode is where things start to get a little more complex as teams are attacking and defending two objectives.  Both objectives must be secured by attackers to progress on to the next set of objectives. If the defending team manages to take one of the two objectives back before the second one is taken, it must be recaptured.  Upon securing both, the defenders will be pushed back towards their base.  Supremacy is definitely the most complicated of the bunch, but it does use rules that are similar to a traditional Domination mode.  Both teams are trying to capture and defend points, but these points must be linked back to their base.  The more plots that are linked, the more points that team will earn.  So there is more strategy here as breaking a strategic link for the opposing team can be really helpful to the overall cause.

As I mentioned before, there is a learning curve to Rising Storm 2: Vietnam.  It’s not a casual shooter and it’s not the most hardcore simulation I’ve ever played, it fits nicely in a niche that noone has really touched in terms of military shooters in quite a while.  It’s a ton of fun to play, whether you’re all by your lonesome and want to play a role in a battle or are playing with people you know.  For those coming from something a little more forgiving, for instance, Battlefield.  A lot of the ideas in Rising Storm 2 are the same in terms of the squad based gameplay, respawns, and abilities.  It’s just that the realism dial is turned up a couple of notches in this game making it both fun and challenging.

If Rising Storm 2: Vietnam has a soft spot it’s in the visuals of the game.  The graphics are a mixed bag.  Things like the actual environments and maps are pretty good looking. The GTX 1080 that we played the game on seemed to be more than enough to keep it stable in terms of frame rate.  Effects like those that occur when you’re being supressed by enemy fire look and sound great.  As do bombing runs, explosions, and smoke on the battlefield.  There’s just a small amount of awkwardness in the character models and movement at times that’s just enough to keep the game from being absolutely incredible.  Given how fun it is to play, and the package as a whole, it’s almost forgiveable as you’re playing the game in the first person anyway.

Rising Storm 2: Vietnam takes the soul of Red Orchestra and brings into a more modern setting.  The game hits a sweet spot between realism, fun, and required teamwork that few games do.