The Saints return in another port, but is this one better? 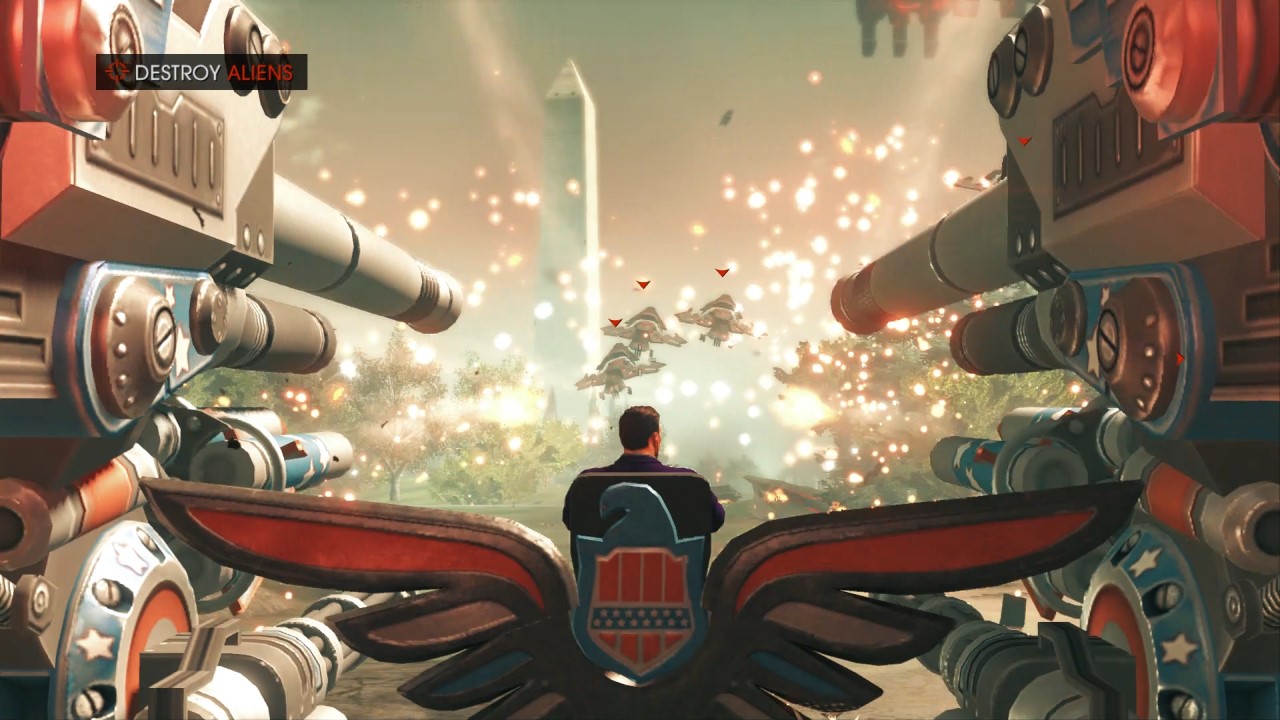 Saints Row may have started out as a generic Grand Theft Auto wannabe, but by the third entry it became the weirdest, most absurd open-world sandbox on the market. If ever there was a story of a franchise coming into its own and carving out a unique identity for itself then Volition’s darling sure takes the crown. It’s been seven years since Saints Row IV came out, and the lack of a new title has not gone unnoticed. Then again, when your publisher crumbles out from beneath you it’s hard to fault the delay.

In the interim we’ve had a multitude of re-releases, next-gen ports, and DLC to tide us over, but last year’s port of Saints Row: The Third for the Nintendo Switch left a remarkably sour taste in many mouths. Calling it poorly optimized only covers half the bill: the game ran like trash in docked mode, and there was an egregious amount of input delay that made playing the game a Sisyphean challenge.

Once Volition confirmed a port of Saints Row IV: Re-Elected was coming to the Switch concerns were justly raised. Would this outing fare as poorly as The Third? While Volition attended to that dismal port and made it better with time, the initial state of the game left many wary. Factor in the god-like super powers and absolute game-breaking insanity one could pull off in the fourth entry as compared to The Third, well, those concerns had merit.

It is then with great pleasure I can report that Saints Row IV: Re-Elected is in a far better state than The Third was at launch, though not all is perfect in Steelport. 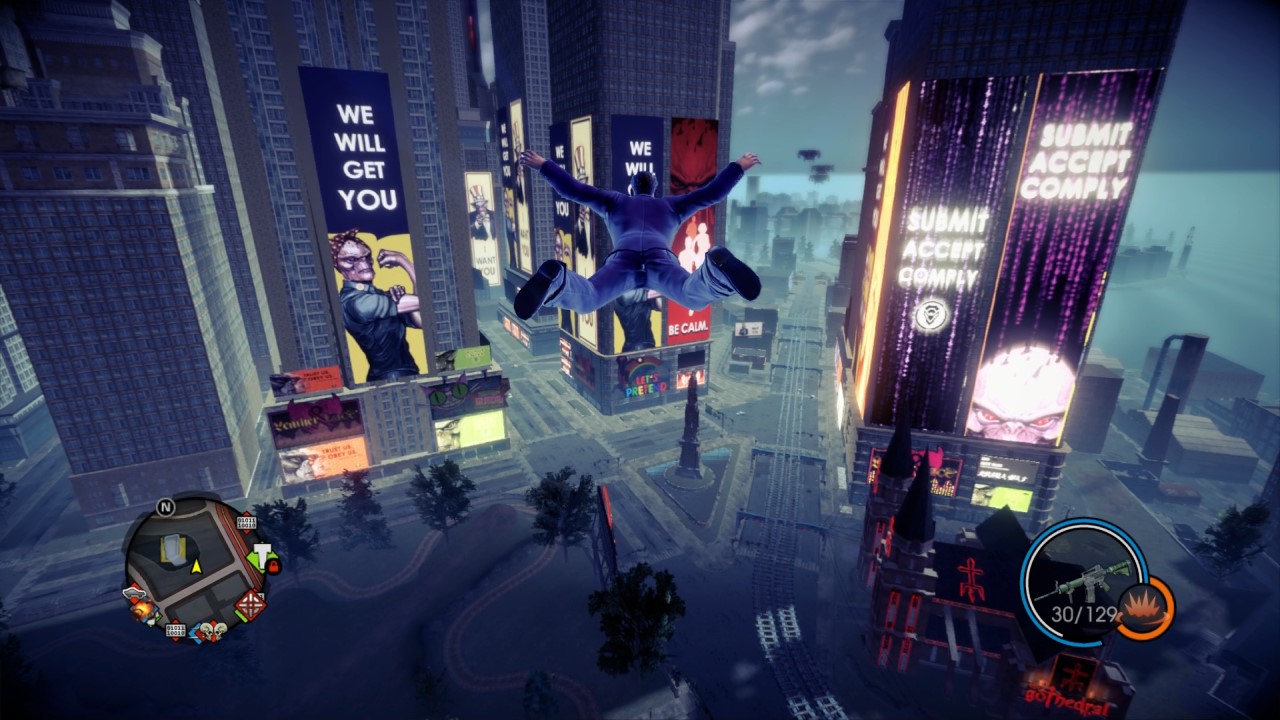 For the uninitiated, Saints Row IV: Re-Elected takes place shortly after the events of The Third, and the leader of The Saints street gang has graduated from celebrity to Presidency. That’s right: you are the President of the United States, and Keith David is your vice-president. If that sentence alone didn’t key you in to the firmly tongue-in-cheek tone the Saints Row franchise thrives off of then the first mission certainly will, as you ride a nuclear missile into the stratosphere with Aerosmith’s “I Don’t Want to Miss a Thing,” playing in the background. The tongue has become one with the cheek in this title.

The Nintendo Switch port doesn’t include anything new in terms on content. This is by and large the same release as it was five years ago when Re-Elected made its way to the PlayStation 4 and Xbox One (including all the post-launch DLC), and that’s fine. There are hundreds of hours worth of activities and collectibles to enjoy here, and the base experience remains excellent. If you wanted an open-world sandbox to play on your Switch that somehow discovered a way to weaponize stupidity then you are in for a treat, especially because this port runs leagues better than the one for Saints Row: The Third did.

Performance issues can be somewhat ignored if they are infrequent enough, but input lag that covers the breadth of the game will ruin the whole experience. This is largely what happened to the Nintendo Switch port of Saints Row: The Third, a port that was in many ways broken, but made utterly unplayable due to an obscene amount of input lag that plagued every action you attempted to make. Thankfully, it seems that problem has been nipped in the bud here in Saints Row IV: Re-Elected for Nintendo Switch.

Aiming, driving, and running at the speed of sound is snappy and responsive, and I never once felt like I was fighting the game when trying to execute a command. Saints Row IV is a frantic sandbox of destruction, so any sort of delay can lead to death and frustration. Not once while playing the port did I think to myself, “yep, this is The Third all over again.” Bit of a backhanded compliment, sure, but true. The same can be said of overall performance. Saints Row IV: Re-Elected for Nintendo Switch has benefited from some of the tweaks Volition and company had to jury-rig into The Third just to get that port playable, making this latest attempt to bring the Saints to Nintendo’s hybrid largely a success. There is a dynamic resolution toggle on by default that helps reduce some of the load and stabilize frame-rates, and even some mild motion controls for when you zoom in to shoot.

That is not to say performance is flawless: docked mode pales in comparison to playing the game handheld, much like Saints Row: The Third for the Switch. The performance in docked mode isn’t near as atrocious, mind you, but it does buckle under the pressure when you load the screen with explosions, super-powered blasts of particle heavy fire effects and wanton mayhem. The experience remains eminently playable, though the slow down is noticeable. It’s not to such a degree that it stalls the game out, but when you opt to go full bat-shit insane the game will struggle to keep up while plugged into a TV.

I believe this largely has to do with the lower limits of the dynamic resolution being set to 720p while docked. I sympathize with Volition’s desire to keep things sharp, but as we’ve seen with other open-world ports dropping the resolution down to 540p in docked is a fair trade-off when the frame-rate can’t maintain thirty frames-per-second without it.

It’s also why I feel handheld runs smoother: the game will drop as low as 480p, which on the smaller Nintendo Switch screen isn’t as apparent when you’re busy raining Hell down on the Zin invaders. The game can stutter on occasion, even in handheld, and the errant frame or two will drop, but these moments feel rare when compared to docked.

Of course, if you don’t mind playing a slideshow you can go into the options and disable the resolution scaling, locking docked to 1080p and handheld to 720p, but the sharper visuals in no way justify the hit to performance. That’s due to the graphical nips and tucks Volition had to make to get Saints Row IV: Re-Elected to even function on the Nintendo Switch. It’s by no means the ugliest port, but the lower resolution textures, shadow maps, lack of quality anti-aliasing and short draw-distances make any gains in fidelity from disabling the dynamic resolution scaling fleeting. There is even a film grain option that can be adjusted if you wish to mask some of the graphical edits, but prospective buyers are best served leaving the dynamic resolution option alone. Not the best version, but a good one no less.

In my humble opinion, docked is competent enough to enjoy, but handheld is the true star of the show here. Knowing full well that’s where the Nintendo Switch’s strength lies with third-party ports it’s a fine concession, though those who prefer to play docked may find themselves peeved performance isn’t better. We are talking about a five year old game at this point (seven, if you don’t factor in the Re-Election re-release), so I’d venture to guess most people who want to play Saints Row IV on their TV have a better alternative in the house (to include aging PCs). But, if I said that of every Nintendo Switch port I’d end up never recommending any of them: if you only care about console performance then of course there are superior options available.

What sets a solid Switch port apart from a mediocre one is the portability appeal. If the game can run with some minor hiccups in docked, yet sail smoothly in handheld it becomes a worthwhile purchase. That’s half the appeal of Nintendo’s console: I can take these games on the go, or play them when a TV isn’t available. If a game fails in both modes then it’s not a worthwhile port, but if can stand on two legs at least in handheld it still has some cards left to play. 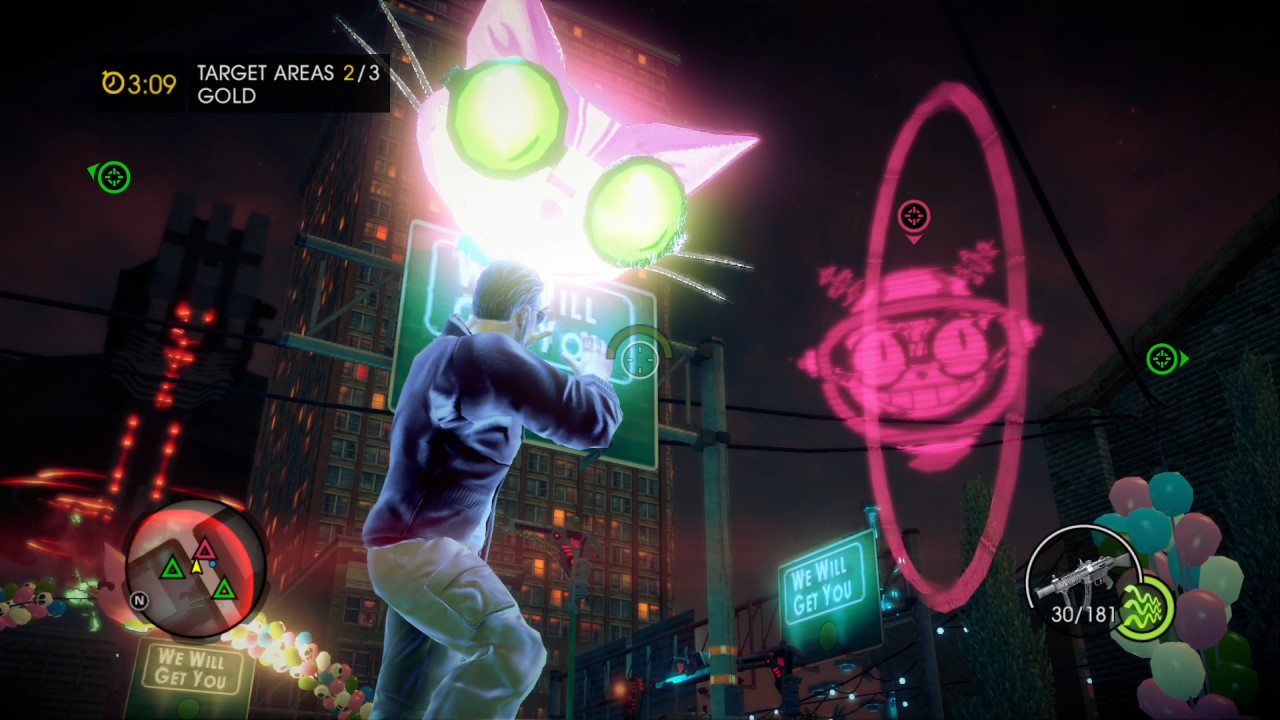 Saints Row IV: Re-Elected performs well-enough while docked and suffers few issues when carried about, meaning the port has a full hand to play. Nintendo Switch owners can easily enjoy the utterly absurd shenanigans with little to worry about, and with the abundance of quality content on offer it’s an easy port to recommend. Being largely single-player also means no faffing about with cross-play or cross-platforms concerns either (sins that make ports like Overwatch harder to suggest).

For $40 you get a decent looking (considering the age of the game), mostly stable port of one of the best open-world games released in the last ten years. It isn’t without blemishes that make it the “objectively worst” version of the game, but if you can stomach the passable docked performance you’ll find an otherwise solid port that is a joy to play on the go. Yes, you can do better, but you wouldn’t be interested in a Switch port of Saints Row IV: Re-Elected if that were the case. Whether a Nintendo Switch purist or someone who uses it as their dedicated mobile device, Saints Row IV: Re-Elected for Nintendo Switch remains a stellar game worth playing if you can endure some minor performance quibbles. Just…maybe play Saints Row: The Third elsewhere.

Nintendo Switch Saints Row IV: Re-Elected
You May Like